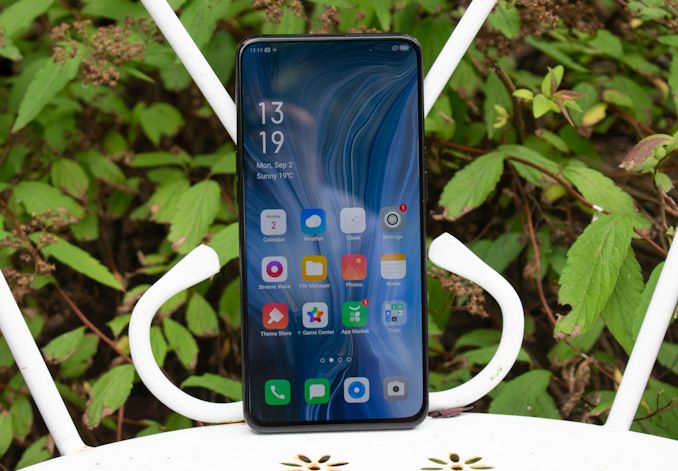 AnandTech has reviewed this product as part of a paid partnership with Qualcomm. The contents of this article are entirely independent and solely reflect the editorial opinion of AnandTech.

The Oppo Reno 10x Zoom is another Snapdragon 855-based phone that was released earlier in the year, and while we did a quick hands-on test of the device back in May, we never really got to fully reviewing the unit until now. Beyond putting the Reno 10x through our usual testing suite, what’s interesting is that in this time Oppo has had the opportunity to refine the software, and we’ve seen particular improvements on the side of the camera with the introduction of a new low-light photography mode.

Over the years, Oppo has been traditional viewed as being a China-only vendor, concentrating on its home market where it’s positioned as one of the top brands and smartphone vendors. This year, we saw Oppo up-end this strategy as the company started to officially release its flagship devices overseas, officially entering European markets in this category. The Reno 10x Zoom alongside its smaller Reno sibling (same design, different internals) thus becomes the first experience among many western costumers.

The device has two key characteristics: A full-screen minimal bezel display which is enabled by housing the front-camera in a mechanical motorised slide-out mechanism, and a triple-camera setup amongst which we find a “periscope” zoom camera module. Both of these features separately aren’t unique to the Reno 10x, however their combination is unique to Oppo.

As many other flagship devices this year, the Oppo Reno 10x Zoom is powered by Qualcomm’s Snapdragon 855 system-on-chip, promising high-end performance both on the CPU and GPU side, whilst offering the latest connectivity options. We’ve covered the chip extensively this year, and summed up how the device performs amongst other implementations in our recent S855 round-up article.

The Reno 10x comes with either 6GB or 8GB of RAM – with the 8GB version reserved as a separate second 256GB SKU above the standard 6GB 128GB and 256GB variants. 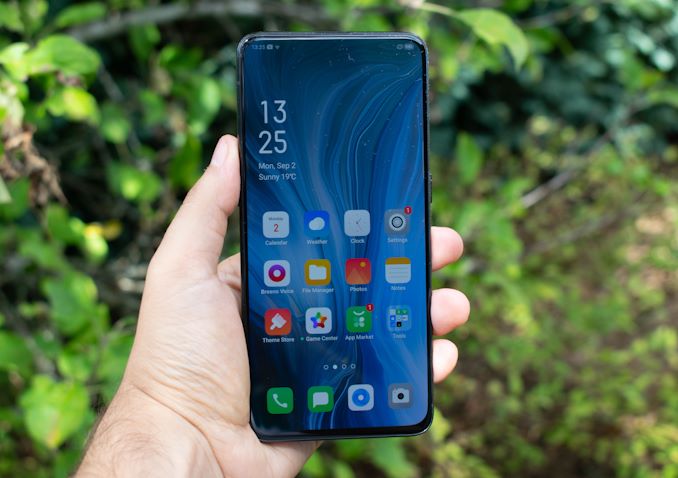 Key to the phone is the Reno and Reno 10x’s fullscreen display design, featuring no large bezels, notchces or camera cut-outs. The display is an AMOLED panel featuring a 2340 x 1080 resolution and comes at a rather large diagonal of 6.6”. The phone is indeed on the larger side of the scale with a width of 77.2mm. 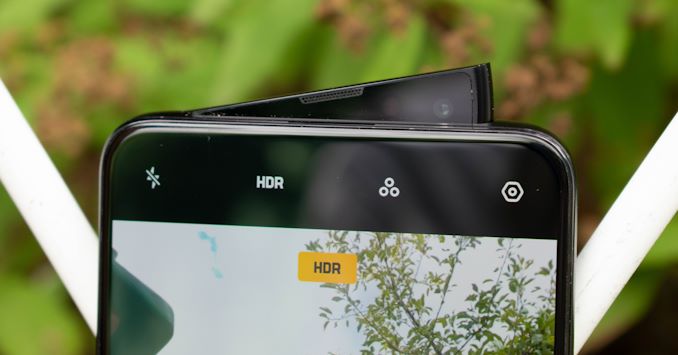 Earlier this summer we reviewed the OnePlus 7 Pro which featured a similar design solution to the full-screen display as the Reno: both phones come with a mechanical motorised slide-out camera. While on the OP7Pro the camera module was of a smaller rectangular design, the Reno opts to go for a wedge design, and alongside the front-camera it also houses the rear flash as well as the earpiece speaker.

I think the one negative aspect of such designs, shared by both the OP7Pro and the Reno 10x, is the fact that the internal actuator mechanism as well as the extra housing for the moving module cause increased weight and thickness of the phones. At 9.3mm the Oppo isn’t quite as thin as some of its competition, and the hefty 215g weight certainly is attributed its design choice. The good news is that like on the OP7Pro, we find a large battery capacity of 3975mAh in design, with a typical capacity of 4065mAh. 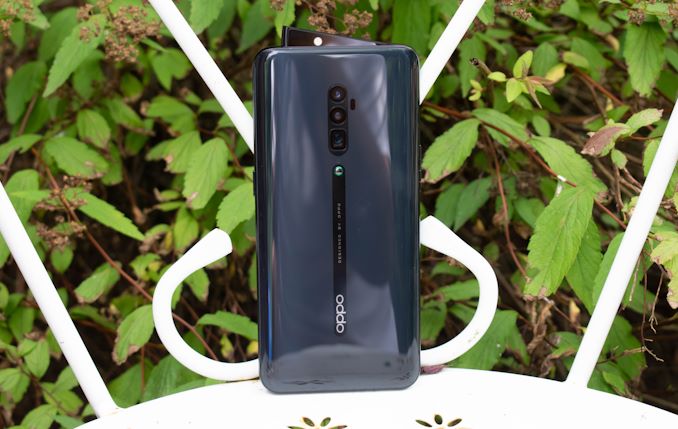 The rear of the phone is defined by a central vertical design highlight consisting of the cameras as well as Oppo’s branding band.

The cameras are actually flush with the back glass of the phone. Again, it’s not the first phone to employ this design, however Oppo was at least forward-thinking here in terms of longevity and draw-back that comes with such a design; earlier this year I commented that I had durability concerns with the LG G8’s choice to go with a flush back glass & integrated camera design, solely on the reason for that it would more easily get scratched and appear in camera captures. Oppo alleviates this concern by including a small raised nub below the cameras, causing the phone to never actually be flush against any surfaces and thus vastly reducing possible scratches of the back glass near the cameras. 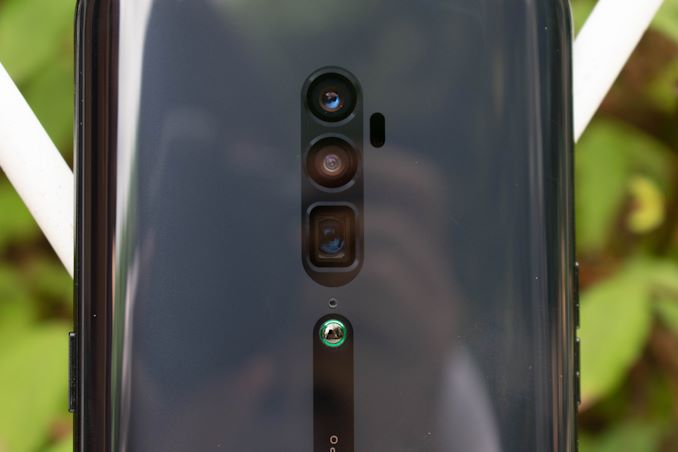 In terms of cameras, the main camera sensor of the Oppo Reno 10x is again the familiar IMX586 from Sony, which comes with a native resolution of 48MP, however offers a quad-bayer colour filter layout with an effective resolution of 12MP. In effect, daily photography with the phone is done at 12MP with an effective pixel pitch of 1.6µm. The camera comes with an f/1.7 lens and features OIS. The ultra-wide-angle module features a 16MP sensor and features a 16mm equivalent focal length, along with f/2.0 optics.

Oppo wants to differentiate the Reno 10x with the inclusion of a “periscope” telephoto module that is able to capture pictures with an up to 5x optical magnification, relative to the main sensor. The sensor here is of a smaller 8MP variant, and the optics are also a quite limited f/3.0 aperture. Again this isn’t the first time we saw such a design as we covered Huawei’s P30 Pro with the same feature. I wasn’t too convinced of the daily viability of such a module, as it comes with large compromises due to the small aperture, as well as just being relatively unpractical at magnification levels between 2.5x to 4.9x (use of the telephoto only starts at 5x). Oppo naturally also advertises a 10x hybrid zoom mode, which is what gives the phone its namesake.

The sides of the phone are straightforward – with power button on the right side as well as two volume buttons on the left side of the unit. The front display is of a flat design, but Oppo maintains curved back edges. This gives the phone the feel of being thinner and helps with its ergonomics albeit its size.

On the bottom we find the hybrid dual-SIM/microSD tray, the USB-C charging port, bottom microphone hole as well as the main speaker grill. The phone features stereo speakers, with the earpiece unit also being used for general playback. Unfortunately, the quality is only adequate as there’s clear bias in favour of the main speaker, making it not all that suitable for landscape listening. The phone doesn’t have any IP rating.

Overall, if I would describe the Reno 10x design in one word I would choose “hefty”. It’s the compromise the company had to make in order to integrate the front camera slide-out mechanism, thickening the body of the phone as well as increasing its weight. Although not quite aesthetically similar, it did remind me of the OnePlus 7 Pro, which shouldn’t be all that surprising as both companies are owned by BBK Electronics and thus likely have the same or similar design & manufacturing processes. Let’s move on onto how the Reno 10x performs, both in terms of literal performance as well as its camera performance.