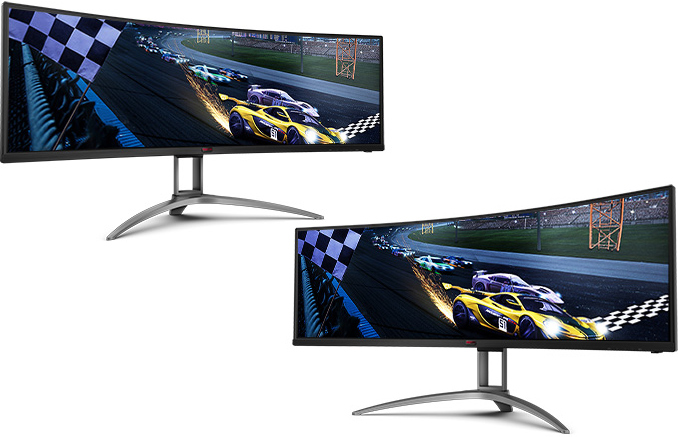 In recent years, displays with an ultrawide aspect ratio have gained traction both among gamers and among prosumers. At first, monitors with a 21:9 aspect ratio were released by a handful of manufacturers, but more recently, most of leading brands launched even wider LCDs featuring a 32:9 or 32:10 ratios. TPV Technology – which makes displays under AOC and Philips brands – was among the first manufacturers with professional-grade 32:9 monitors, so now it's following-up with the gamer-focused AOC Agon AG493UCX.

The AOC Agon AG493UCX uses a 5120×1440 VA panel that features a 1800R curvature, which essentially means that the display offers the same number of pixels and screen real estate as two 27-inch QHD LCDs. Other specifications of the LCD include a max luminance of 550 nits, a 3000:1 contrast ratio, 178º/178º vertical/horizontal viewing angles, a 1 ms MPRT response time, and a refresh rate up to 120 Hz. The monitor can display 121% of the sRGB or 93% of the DCI-P3 color gamuts. Additionally, it comes factory calibrated to a Delta<2 accuracy (presumably for the sRGB color space). 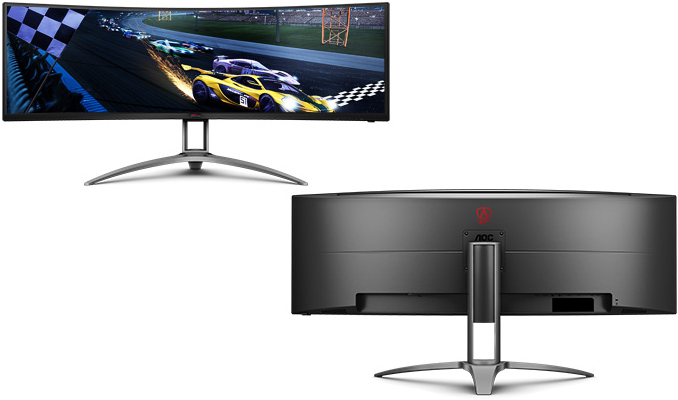 Since we are dealing with a monitor aimed at gamers and entertainment enthusiasts, the AOC Agon AG493UCX supports VESA Adaptive-Sync variable refresh rate technology, so expect it to be certified by AMD for its FreeSync as well as NVIDIA for its G-Sync Compatible label. Speaking of certifications, the display also carries VESA’s DisplayHDR 400 badge.

Just like other premium monitors for gamers, the Agon AG493UCX has multiple display inputs (two DisplayPort 1.4 inputs, two HDMI 2.0 ports, and one USB Type-C port with a 65-W Power Delivery) as well as a triple-port USB 3.2 Gen 1 Type-A hub. What is surprising is that the monitor has docking capabilities, which includes a GbE port, and a KVM switch, features which aren't particularly common in gaming-focused gear. In addition, it has built-in 5 W speakers and a headphone output.

One indisputable advantage of AOC’s Agon AG493UCX is its stand that can adjust its height, tilt, and swivel, a very rare feature on large displays.

The AOC Agon AG493UCX will be available starting from January 7, 2020, for $999.99 in the US. Meanwhile, since AOC China already lists the display on its website, expect the monitor to hit the market in the country shortly.