System performance on the QRD865 was a bit of a tricky topic, as we’ve seen that the same chipset can differ quite a lot depending on the software implementation done by the vendor. For the performance preview this year, Qualcomm again integrated a “Performance” mode on the test devices, alongside the default scheduler and DVFS behaviour of the BSP delivered to vendors. 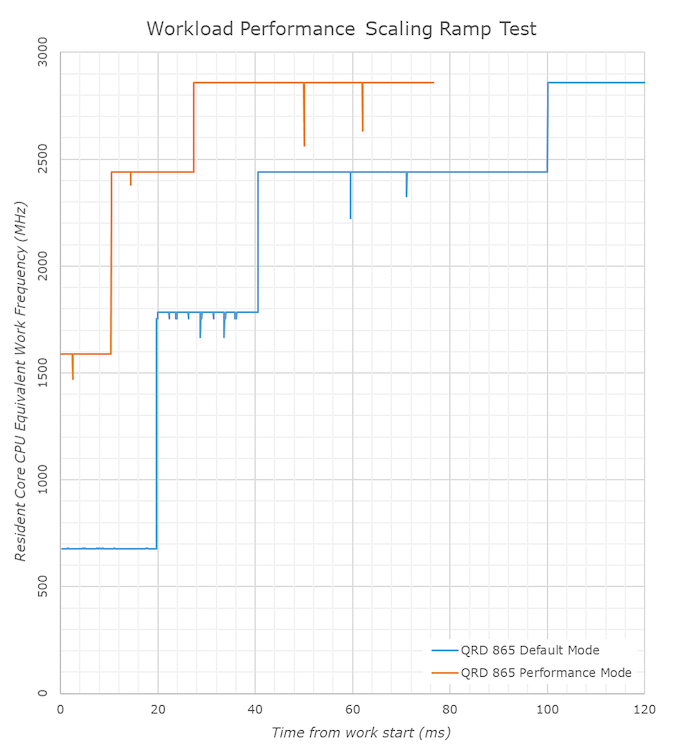 There’s a fine line between genuine “Performance” modes as implemented on commercial devices such as from Samsung and Huawei, which make tunings to the DVFS and schedulers which increase performance while remaining reasonable in their aggressiveness, and more absurd “cheating” performance modes such as implemented by OPPO for example, which simply ramp up the minimum frequencies of the chip.

Qualcomm’s performance mode on the QRD865 is walking this fine line – it’s extremely aggressive in that it’s ramping up the chipset to maximum frequency in ~30ms. It’s also having the little cores start at a notably higher frequency than in the default mode. Nevertheless, it’s still a legitimate operation mode, although I do not expect very many devices to be configured in this way.

The default mode on the other hand is quite similar to what we’ve seen on the Snapdragon 855 QRD last year, but the issue is that this was also rather conservative and many popular devices such as the Galaxy S10 were configured to be more aggressive. Whilst the default config of the QRD865 should be representative of most devices next year, I do expect many of them to do better than the figures represented by this config. 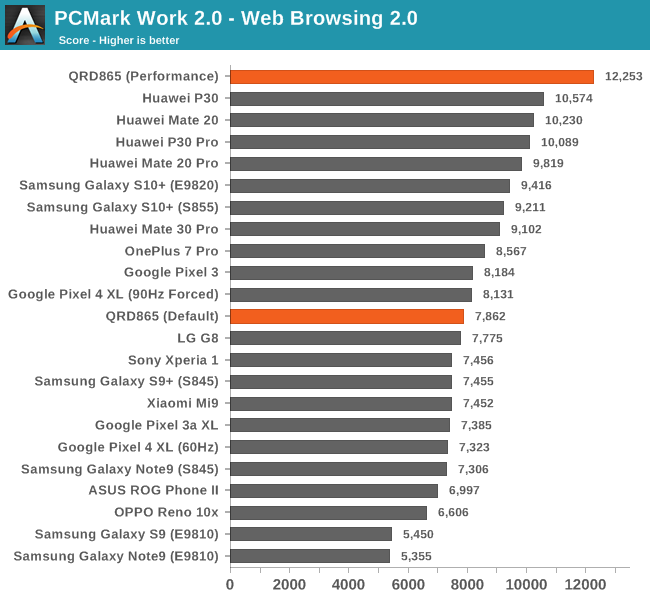 Starting off with the web browsing test, we’re seeing the big difference in performance scaling between the two chipsets. The test here is mostly sensible to the performance scaling of the A55 cores. The QRD865 in the default more is more conservative than some existing S855 devices, which is why it performs worse in those situations. On the other hand, the performance results of the QRD865 here are also extremely aggressive and receives the best results out there amongst our current device range. I expect commercial devices to fall in somewhere between the two extremes. 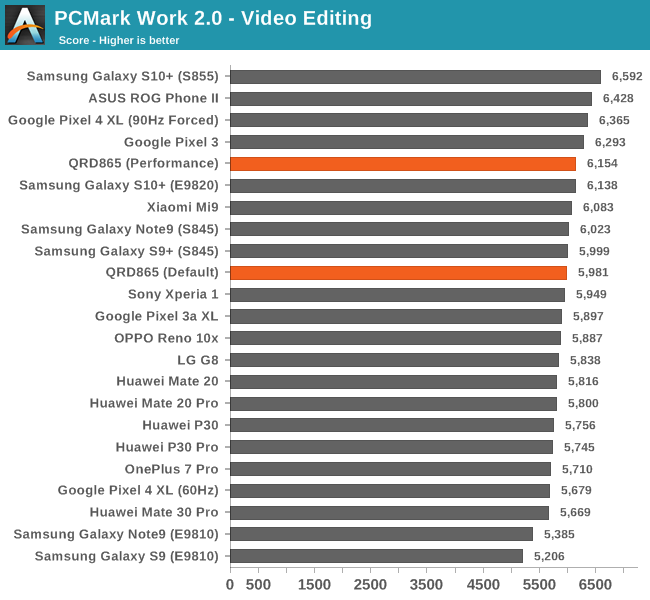 The video editing test nowadays is no longer performance sensitive and most devices fall in the same result range. 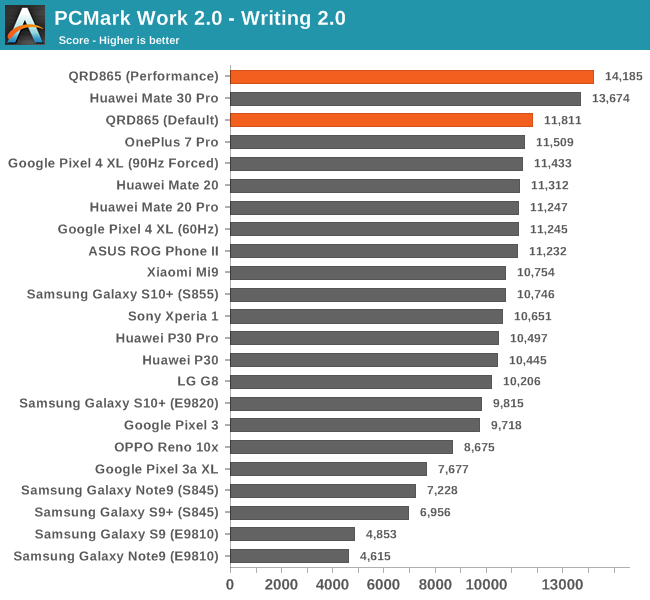 The writing test is amongst the most important and representative of daily performance of a device, and here the QRD865 does well in both configurations. The Mate 30 Pro with the Kirin 990 is the only other competitive device at this performance level. 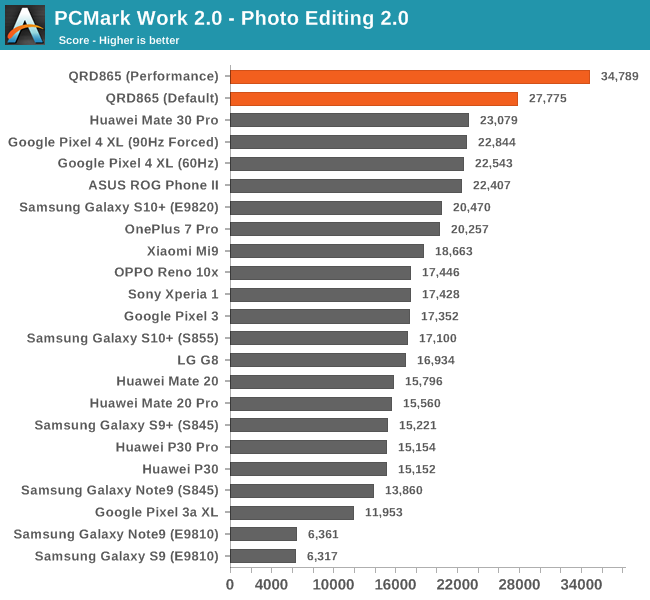 The Photo Editing test makes use of RenderScript and GPU acceleration, and here it seems the new QRD865 makes some big improvements. Performance is a step-function higher than previous generation devices. 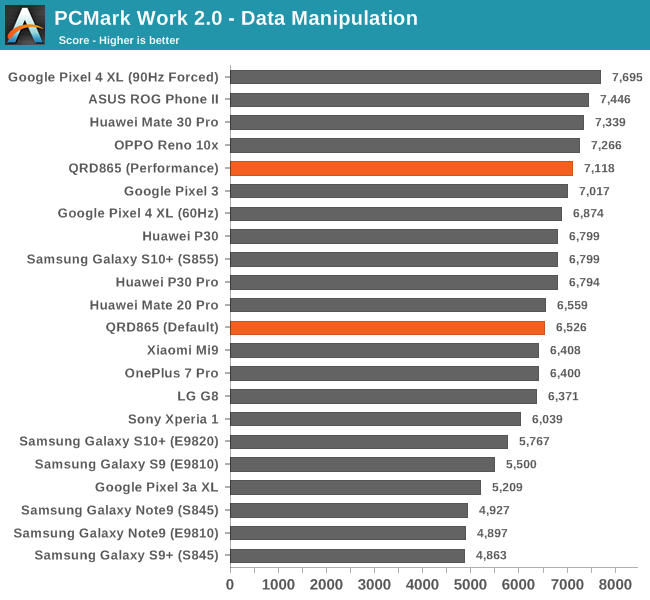 Finally, the data manipulation test oddly enough falls in middle of the pack for both performance modes. I’m not too sure as to why this is, but we’ve seen the test being quite sensible to scheduler or even OS configurations. 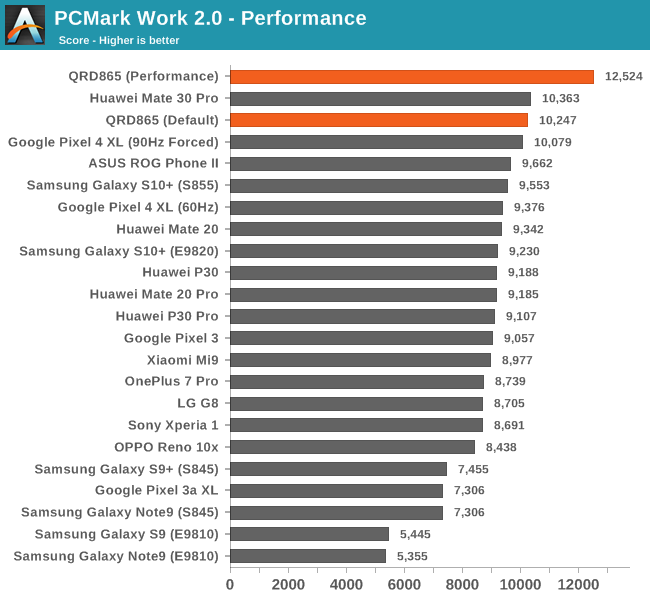 Generally, the QRD865 phone landed at the top of the rankings in PCMark. 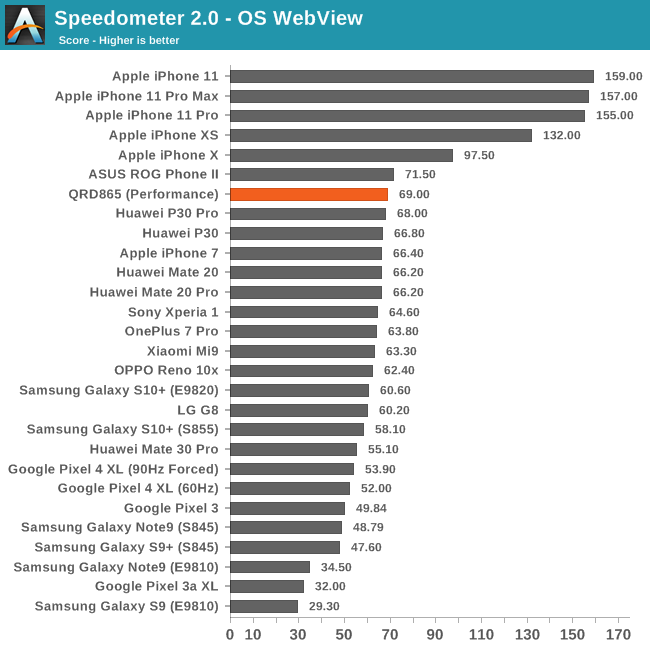 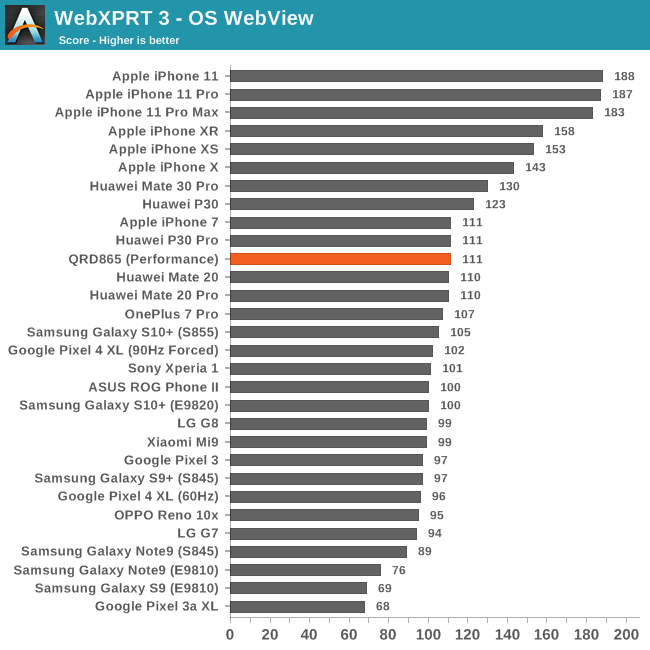 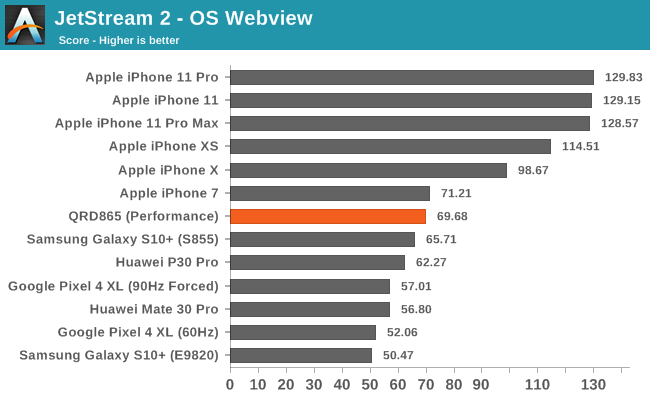 The web benchmarks results presented here were somewhat disappointing. The QRD865 really didn’t manage to differentiate itself from the rest of the Android pack even though it was supposed to be roughly 20-25% ahead in theory. I’m not sure what the limitation here is, but the 5-10% increases are well below what we had hoped for. For now, it seems like the performance gap to Apple’s chips remains significant.

Overall, we expect system performance of Snapdragon 865 devices to be excellent. Commercial devices will likely differ somewhat in terms of their scores as I do not expect them to be configured exactly the same as the QRD865. I was rather disappointed with the web benchmarks as the improvements were quite meagre – in hindsight it might be a reason as to why Arm didn’t talk about them at all during the Cortex-A77 launch.