Not all motherboards are created equal. Compared to consumer hardware, prosumer level options with workstations opt for different peripheral features, but ultimately it comes down to support. The Supermicro X11SPA-T is a single socket workstation motherboard with a range of high-end features, designed to support both Intel Xeon Scalable CPUs and Xeon-W 3200 series CPUs, but its focus is with the workstation hardware on the C621 chipset. With support for up to 2 TB of DDR4-2933 memory (Xeon W) or 3 TB (Xeon Scalable) across twelve slots, a dedicated ASPEED BMC controller offering IPMI functionality, and seven full-length PCIe 3.0 slots, the Supermicro X11SPA-T looks like one of the premium high-end options for users looking to build a Xeon W-3200 based workstation.

Earlier on in the year, Intel dropped its new Xeon W-3200 Cascade Lake based processors which range from its base 8-core Xeon W-3223 model, right up to its Xeon W-3275 with 28 cores and 56 threads, each supporting 1 TB of memory. There is also the W-3275 which supports 2 TB. The primary use for the Intel Xeon-W range is workstations, and Cascade Lake enables certain internal fixes for the Spectre and Meltdown security flaws outlined over the last year. Some of the benefits of the LGA3647 socket Xeon W-3200 processors include six memory channels, support for AVX-512, and 64 PCI lanes on-chip, which allows for four PCIe 3.0 x16 slots to be used. 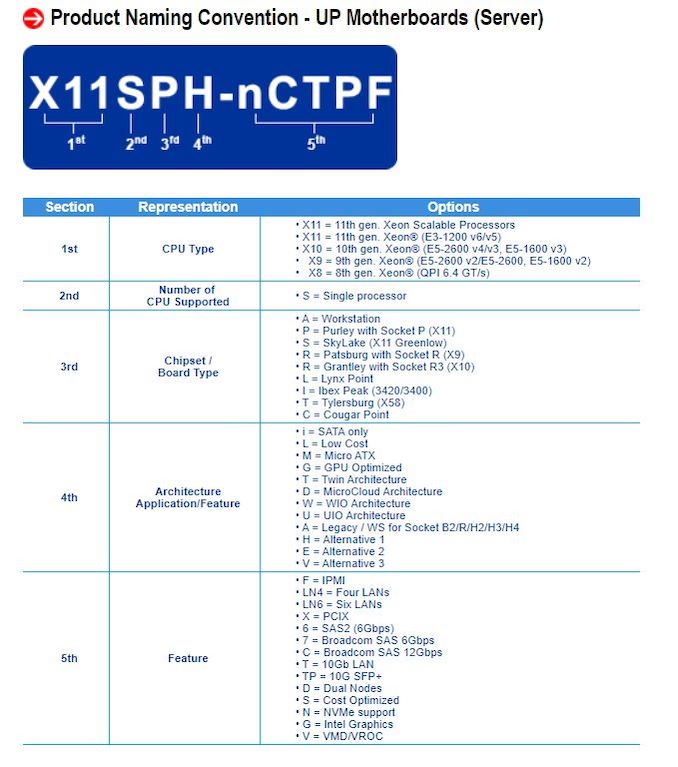 Supermicro uses its own product naming scheme which it publishes on its website to help users distinguish differences between models. Deciphering the Supermicro X11SPA-T reveals that it's designed for 11th gen (as defined by Supermicro) Xeon Scalable processors, that it's a single socket LGA3647 Purley model, it's on a workstation platform, and that it has 10 gigabit Ethernet. 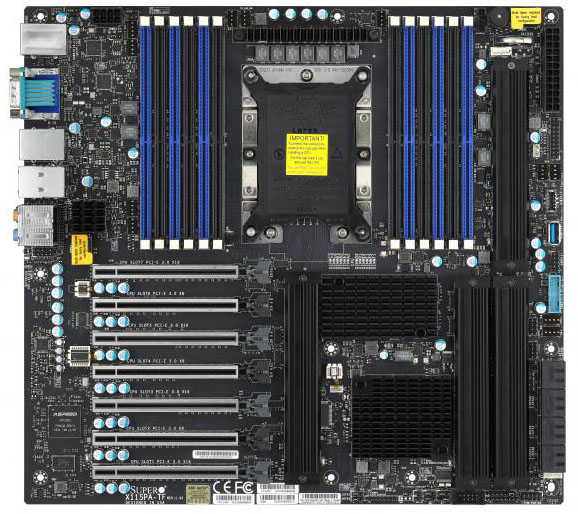 One board designed to use all of what the Intel Xeon W-3200 family has to offer is the Supermicro X11SPA-T, with a high-end feature set across its large E-ATX PCB. Not every user requires a dual-socket solution, and on paper, the X11SPA-T looks to tick a lot of boxes for users looking for the foundation to a single socket workstation. Not only does it feel it has solid presence, but a full set of DRAM slots, a full array of seven reinforced PCIe slots, four M.2 slots with heatsinks, and as the name suggests, 10 gigabit Ethernet.

As this is a workstation board, it has an ASPEED AST2500 IPMI chip for external control, which is also combined with an onboard D-Sub output, and an integrated Realtek RTL8211E PHY which allows users to access the IPMI via a network when the system has power but isn't switched on. Design-wise, it's the quintessential Supermicro workstation board with a core black theme across the PCB, and heatsinks, which cover the vital areas which need cooling. The twelve memory slots support up to 1 TB or 2 TB depending on the Xeon W-3200 series processor used, meaning 8 x 64 GB + 4 x 128 GB for 1 TB, and 8 x 128 GB + 4 x 256 GB for 2 TB.

For the PCIe lanes, one of the most dominating aspects to the Supermicro X11SPA-T is the seven full-length PCIe 3.0 slots towards the bottom left-hand corner. They operate at x16/x0/x16/x0/x16/x0/x16, or x16/x8/x8/x8/x8/x8/x8 depending on how PCIe devices are installed. Three of the full-length slots share bandwidth with three of the PCIe 3.0 x4 M.2 slots, so there is some muxing involved. There are four PCIe 3.0 x4 M.2 slots, each featuring its own heatsink. Users looking to use these in RAID with Intel (and other approved) drives can do so, as Supermicro includes a VROC RAID key within its software bundle for RAID 0 and 1 support. For SATA drives and devices, there are eight SATA ports which support RAID 0, 1, 5, and 10 arrays. 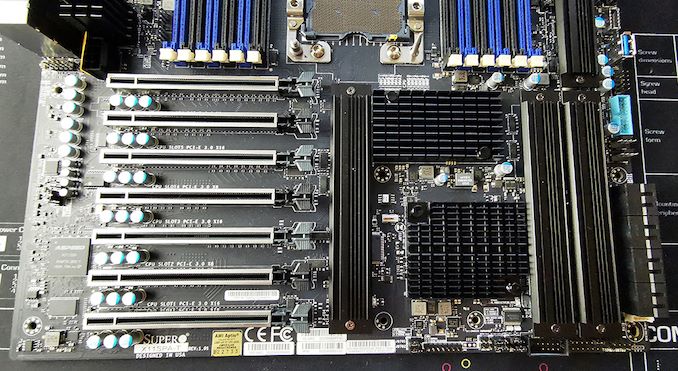 Looking at the networking on the Supermicro X11SPA-T, there are three Ethernet controllers; one Aquantia AQC107 10 G, one Intel I210-AT Gigabit, and a Realtek RTL8211E PHY dedicated to the boards integrated BMC/IPMI chip. Also on the rear panel is four USB 3.1 G1 Type-A ports, with a single USB 3.1 G2 Type-A, and one USB 3.1 G2 Type-C port. Users can expand on this with a single USB 3.1 G1 headers allowing for two extra Type-A ports, and a single USB 2.0 header which also supports two additional ports. The boards five 3.5 mm audio jacks and S/PDIF are controlled by a Realtek ALC888 HD audio codec.

Overall this board feels substantial. There's nothing fancy like an onboard RAID controller, but for almost everyone who wants to throw the kitchen sink at an Intel workstation system, on paper at least, Supermicro has a very substantial product for the market.

Comparing performance to previous Intel X299 HEDT motherboards and Intel C246 based models, everything seems on par with what's expected. We were given the W-3235 to test with, which is a 12-core processor, while our comparison reviews used the consumer 10-core. The extra cores of our Intel Xeon W-3235 do perform better in some of our CPU focused tests, but does fall in-line with other models tested in memory heavy tests such as in Blender, and WinRAR. Unsurprisingly in our system tests, power draw is naturally higher than other models previously tested due to the higher core count, and in our non-UEFI POST time test, booting times are much higher than with conventional consumer-focused models due to the added features.

The Supermicro X11SPA-T has a current retail price of $650 at Newegg, and as a result, doesn't have much competition. It's a premium workstation focused model that currently supports all of Intel's Xeon W-3200 product stack, with a lot of headroom for various configurations. If you can find a processor to pair it with, the seven full-length PCIe 3.0 slots are perfect for virtualization tasks, and lots of PCIe 3.0 x4 M.2 and eight SATA ports add plenty of storage capability. Supermicro has seemingly gone all out with its X11SPA-T, but it's time to see how it compares to other Intel HEDT we have tested, including the Supermicro X11SRA motherboard which we tested with the previous generation Intel Xeon W-2155 10-core 20-thread processor.

Read on for more extended analysis.