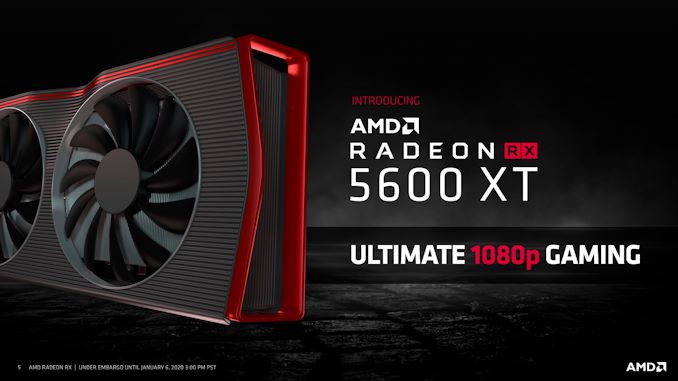 With the launch of the Radeon RX 5700 series and Radeon RX 5500 XT under their collective belt, AMD is now getting ready to fill in the divide between the card families. With the RX 5500 XT carrying a $199 price tag and the next step up being the $349 RX 5700, there’s a significant gap in price and performance between the two cards. All of which has left AMD at a disadvantage in the popular $200-$300 mainstream segment, where NVIDIA’s GeForce GTX 1660 cards dominate. To that end, today AMD is announcing the third sub-series of the Radeon RX 5000 family, the Radeon RX 5600 series. These latest cards will be coming to retail, OEM, and mobile, with the retail Radeon RX 5600 XT leading the charge.

Designed to fill that gap between the RX 5700 series and the RX 5500 series, the $279 RX 5600 XT is employing a further cut-down version of AMD’s class-leading Navi 10 GPU. For their latest card, AMD is dialing back on the amount of enabled hardware in order to offer a card with performance between the existing Radeon RX 5000 series cards, and with a price to match. The net result is a card that, in AMD's words, is intended to be the ultimate 1080p gaming card, and just as importantly, go head-to-head with NVIDIA’s GeForce GTX 1660 cards.

As mentioned earlier, AMD hasn’t minted a new GPU for the Radeon RX 5600 XT. Instead, the company is using a further cut-down version of Navi 10, which is already used for the Radeon 5700 series. And while AMD generally avoids talking about salvaging when discussing lower-tier products, it's difficult to imagine that's not a factor here, even if the official line is focused more on it being a conscientious choice to bring Navi 10 down to compete with NVIDIA's GTX 1660 series. Either way, with the RX 5600 XT essentially getting a third-tier Navi 10-based card.

All told, it is rather rare for AMD to offer a third-tier part on the desktop; normally the company only offers two cards/configurations before moving up or down to the next GPU. Part of their current situation is based out of sheer necessity on the GPU side of matters – Navi 14 isn't powerful enough for the market AMD is chasing – though I imagine yields on the 7nm process also have room to improve since it's still relatively young. At the end of the day, it means AMD can kill two birds with one stone by putting chips that would otherwise be discarded to use in a card to counter the GeForce GTX 1660 series. 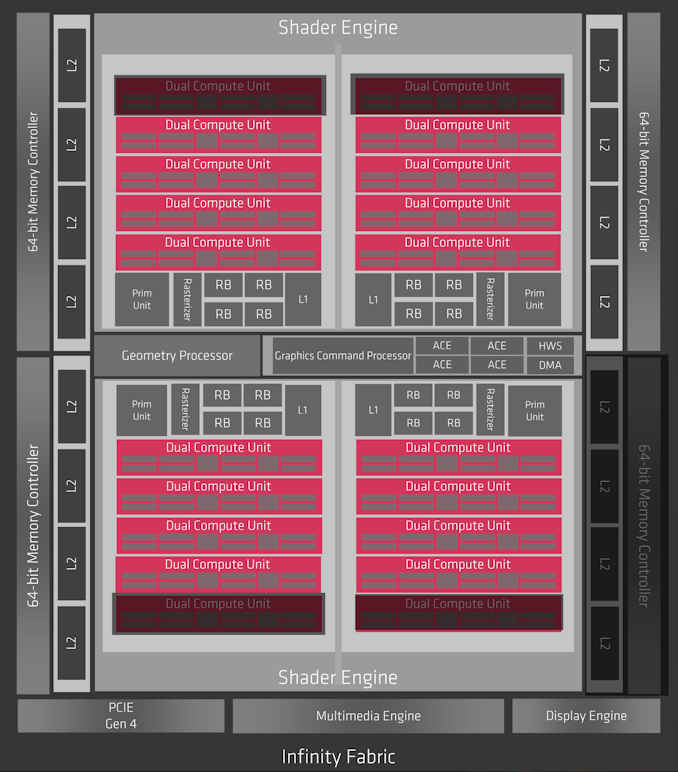 Digging into the specifications, as it’s configured, the Radeon RX 5600 XT is set to be firmly between the RX 5700 and RX 5500 XT in performance. AMD’s interesting choice of functional blocks to cut (and not to cut) means that the RX 5600 XT actually retains a lot of the RX 5700’s "core" GPU performance: on paper, the card's shading, texturing, pixel throughput, and compute performance are all quite close to the RX 5700, with the only difference is 15% lower average clockspeeds. AMD has even retained Navi 10's 64 ROPs, meaning that the card has plenty of pixel pushing power. 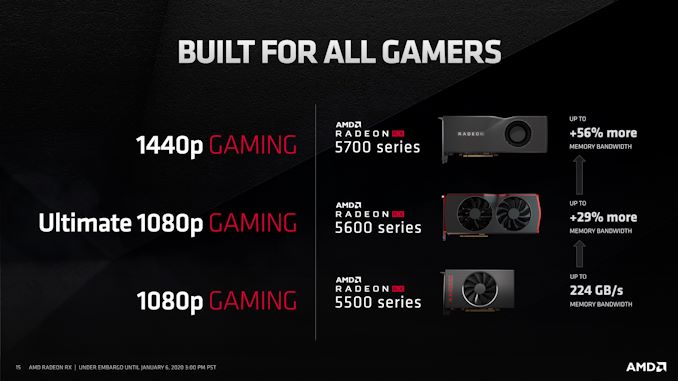 Cutting back on memory bandwidth makes a lot of sense for AMD, both in terms of differentiating products with regards to performance as well as bringing down the card’s manufacturing price. That said, this is the first time in a long while that we’ve seen an AMD card with a 192-bit memory bus; the company normally just doesn’t do it. Power-of-two configurations are easier to deal with for various reasons, and it’s always allowed AMD to pack in more memory than NVIDIA’s competing mid-range cards. Ultimately the use of a 192-bit bus means that AMD can put to work Navi 10 GPUs with a bad memory controller, all the while using fewer (and cheaper) memory chips than in a 256-bit card. But it also means they are only able to outfit the card with 6GB of memory, as opposed to 8GB.

Without getting entirely sidetracked here, I went into this matter a bit back in the RX 5500 XT launch, but I do have some concerns about cards with less than 8GB of VRAM. With the next-gen consoles set to launch this year, the bar on hardware requirements is about to be significantly raised in one fell swoop, and I worry that sub-8GB cards won’t have enough memory capacity. With all of that said, however, whatever the ramifications are, it will mean AMD and NVIDIA are on equal footing: both the RX 5600 XT and GTX 1660 series ship with 6GB of VRAM, so both cards will thrive or falter at the same time. Clearly explaining a 6GB RX 5600 XT versus an 8GB RX 5500 XT is going to be a trickier matter for AMD's marketing department, however.

Rounding out the hardware package, AMD tells us that the new cards will ship with a TBP of 150 watts, which like everything else is right between the RX 5700 and RX 5500 XT. The smaller VRAM amount and lower clockspeeds help to bring down power consumption versus the RX 5700, which helps to keep AMD's energy efficiency up. In fact, AMD tells us that their 150W TBP value for the retail card is a bit on the conservative side of matters, and that real-world power usage will sometimes be less, so I’ll be interested in seeing just what our benchmarks turn up in a couple of weeks for the new card.

Since the RX 5600 XT is built from the same Navi 10 GPU as AMD’s RX 5700 cards, AMD’s board partners will be hitting the ground running here in terms of board designs. Some will just outright be reusing RX 5700 designs, while others will be tweaking their designs to account for the narrower memory bus, lower TBP, and lower sticker price.

This also means that this is a board partner-driven launch. AMD doesn’t have a (public) reference card, and it is the board partners shipping custom designs from day 1. As these are sub-$300 cards we won’t be seeing anything too exotic – mostly the usual variations on two and three fan designs – though factory overclocked cards will be peppered into the mix. 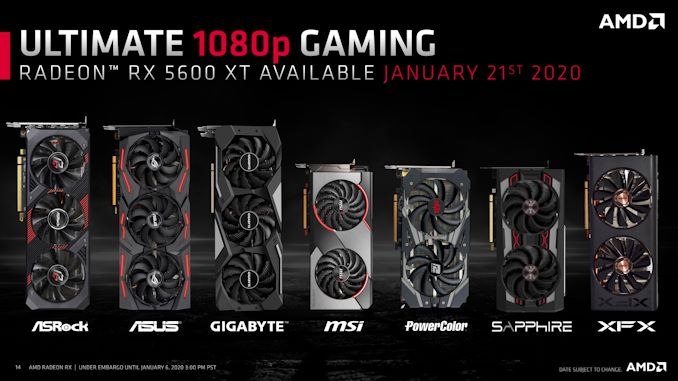 As mentioned previously, AMD’s target market for the RX 5600 XT is mainstream gamers, with the company offering a card that is supposed to be the final word in 1080p gaming. 1080p is still the single largest segment of the gaming market, and after watching rival NVIDIA sell GTX 1060 cards by the millions over the last few years, it's a market that AMD isn't content to leave alone.

Within AMD’s product stack, the RX 5600 XT doesn’t have a particularly good direct predecessor. The closest analog would be the Radeon RX 580 or RX 590, which is somewhat the same lineup that the RX 5700 served to replace. However as it’s not as powerful as the RX 5700, the RX 5600 XT, there's an argument to be had about whether it can deliver a full generational performance update over the RX 580/590. Though as an upgrade to older RX 300-era systems it would be a gigantic step up, or as a natural step within AMD’s expanding product stack for new system builds. 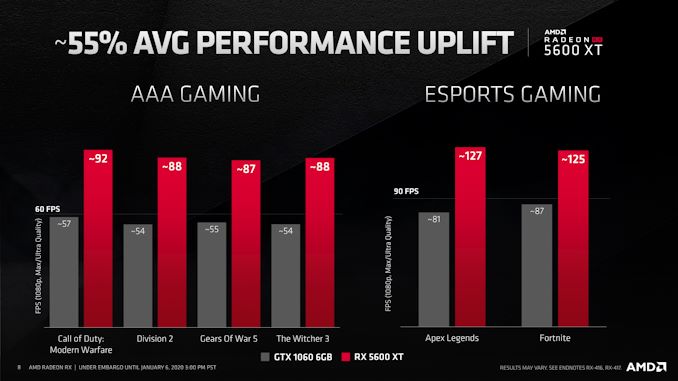 The competition for the RX 5600 XT then is both NVIDIA’s GeForce GTX 1660 series and their older GTX 1060 cards. AMD is especially keen on winning over GTX 1060 owners who are looking for an upgrade, but aren't satisfied with NVIDIA's offerings. None of the Turing cards have been true generational upgrades over their Pascal predecessors, so this is a sentiment that AMD is hoping to build off of by offering a better 1080p card than NVIDIA. 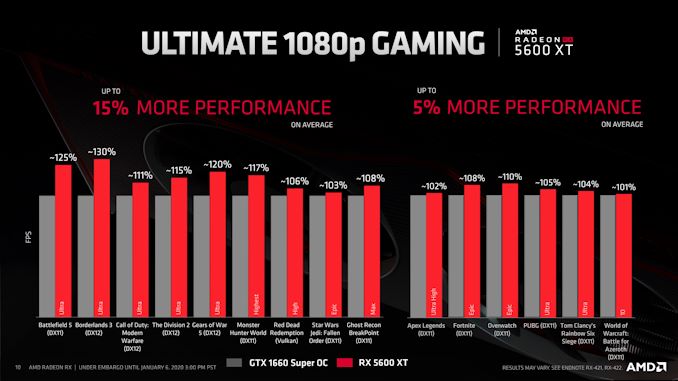 And with a cut-down Navi 10 part, AMD should be able to get there. While all vendor numbers should be taken with a large grain of salt, AMD's internal benchmarks have them ahead of the entire GTX 1660 family, and given the RX 5600 XT's specs (and what RX 5700 can do), this is fairly believable. In fact the biggest challenge for AMD isn't even raw performance, but rather it's beating NVIDIA on overall value.

While NVIDIA’s recent mid-generation Super refresh has kind of made a mess of their product stack here, the $229 GTX 1660 Super has become a clear front-runner of the GTX 1660 family, as its great perf-per-dollar ratio has made the other GTX 1660 cards (e.g. GTX 1660 Ti) rather redundant. So although AMD can handily beat the entire GTX 1660 series on performance, it's not the $279 GTX 1660 Ti where AMD's stiffest competition lies. Instead, they need to be able to convince potential buyers that iRX 5600 XT is worth the $50 premium over the competitively priced GTX 1660 Super.

Overall, AMD is rolling out the Radeon RX 5600 XT with high hopes. The company has a clear goal in mind: to dethrone NVIDIA at the high-end of 1080p, and they have hardware that should be able to do it. Now we'll just have to see where the cards come to rest when the Radeon RX 5600 XT launches on January 21th. So stay tuned for our full look at AMD’s latest video card later this month. 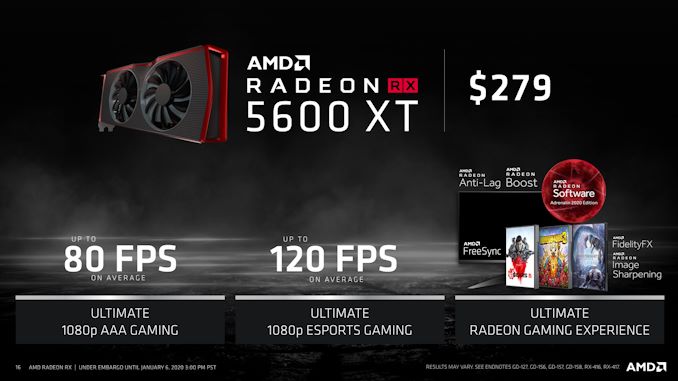