Intel Initiates EOL for the VCA2: Three Xeons on a PCIe Card

One of Intel’s more interesting products over the recent years was its range of Visual Compute Accelerator cards, designed to help cloud streaming and encoding/decoding of HD and UHD video. These cards were built on the QuickSync principle, using Intel’s integrated graphics to accelerate the process, but also using special Xeons with added eDRAM (known as Crystalwell) to help accelerate the process. These cards fit into a PCIe 3.0 x16 slot, and used a switch to control them, as well as shuttling data across the PCIe bus. They were launched in 2017, and now Intel is putting them onto the End-Of-Life track for product discontinuance.

These cards were geared towards the cloud video streaming market, and contained three E3-1585L v5 processors inside with Iris Pro P580 graphics. The card as a whole was rated for 235 W, which includes the switch inside, and through a host you could ssh into the CPUs similar to how Intel made Xeon Phi add-in cards. Intel’s SDK pacakages for the card revolved around AVC transcoding at 30 FPS, as well as a Kernel development kit for CAD applications. 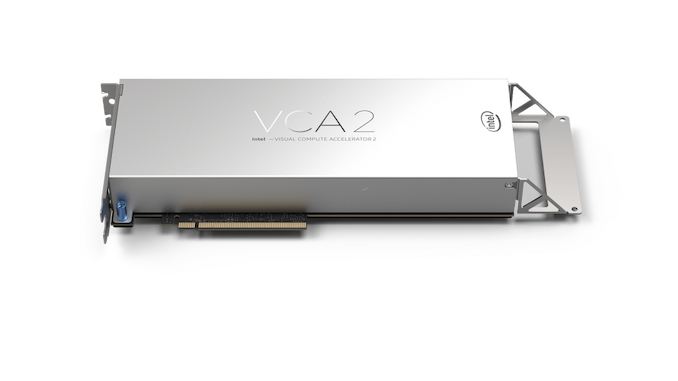 We actually saw a third party company at Supercomputing this year who built the cards specifically for HPE’s customer deployments. They were showing off the PCB routing and cooling skills. The card was quite heavy and long, requiring an 8-pin and a 6-pin PCIe connector to provide enough power.

The EOL timeline for the VCA1585LMV starts on May 22nd, with a final order date of August 1st. Orders are non-cancelable after September 1st, and all orders will be shipped by the end of the year. Any orders placed between the final order date and the final shipment date will be filled by any existing inventory. Interestingly enough, Intel also includes this snippet in its product notice that I’ve never seen before:

At this point in time Intel has not stated if it plans to launch a new version of the Visual Compute Accelerator – given that VCA2 is now in EOL and no VCA3 is announced, this line of products has likely finished, or will be replaced by future AI/Xe/FPGA efforts.