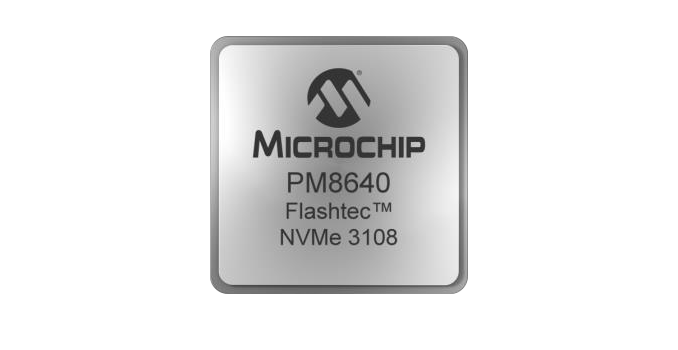 Microchip is announcing their first PCIe 4.0-capable SSD controller for low-power and entry-level enterprise SSDs. The new Flashtec NVMe 3108 is the smaller 8-channel derivative of the 16-channel Flashtec 3016, first announced two years ago. The 3016 has since moved from sampling to mass production, and as a derivative based on the same architecture, the new 3108 is expected to make that same transition much more quickly: sampling now, and production sometime in the first half of next year. 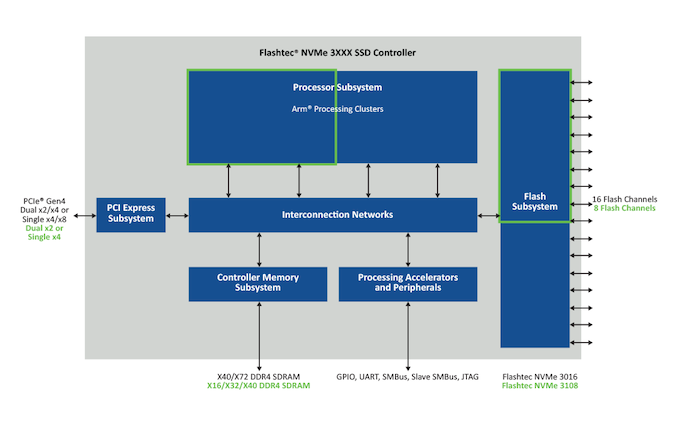 The 3108 runs its DDR4 interface a bit slower than its larger sibling (2400 MHz instead of 3200 MHz), but supports the same NAND interface speeds up to 1200 MT/s — a huge improvement over the 533 MT/s supported by the previous generation Flashtec controllers. This allows the 3108 to hit sequential read speeds of over 6 GB/s and random read speeds of 1M IOPS when paired with sufficiently fast flash memory. This isn't quite saturating what a PCIe 4 x4 link is capable of, but is competitive with other PCIe gen4 enterprise SSD solutions that have been announced such as the Samsung PM9A3 (6.5GB/s, 900k IOPS) or the 16-channel Kioxia CD6 (6.2GB/s, 1M IOPS).

The Flashtec NVMe 3108 includes fewer processor cores than the 3016, but still more than necessary for implementing basic SSD functionality. Microchip has designed the 3108 and the 3016 with spare processing power to accommodate computational storage use cases. This generation switched from Tensilica CPU cores to Arm cores, making for a more familiar development environment for customers developing firmware for these SSD controllers. Microchip says some customers are even running Linux on a subset of the controller's Arm cores.

Two major features of the Flashtec NVMe 3016 are outright missing on the 3108. The smaller controller doesn't include the compression accelerator hardware from the 3016, so it is not as well suited for computational storage duty along those lines. The 3108 also lacks the expansion port of the 3016. The larger chip's expansion port is intended to allow two SSD controllers to pair up and be used as a 32-channel controller, since Microchip is no longer producing a monolithic 32-channel version of their controllers. This expansion port is unneeded on the 3108 since they already have a 16-channel solution that is simpler and likely faster and more efficient than a dual-chip 8+8 channel setup would be. (Competitors in the enterprise SSD controller space have also used dual-controller designs, such as Marvell's dual-chip 16-channel solution. Silicon Motion has taken an in-between strategy, designing a single-chip 16-channel controller that is internally organized much like a combination of two 8-channel controllers.)

Aside from those features, the 3108 checks all the same boxes as the 3016: support for cryptographically verified firmware, dual-port PCIe, virtualization. Customers building SSDs with the 3108 should be able to implement the full range of NVMe 1.4 features and probably anything coming in NVMe 2.0, though not everyone will be including all of those optional features in their firmware.

Microchip's customers for Flashtec SSD controllers include numerous SSD vendors as well as some hyperscale cloud service providers who design their own SSDs. Each of these has their own firmware development and QA processes and few are particularly open about their long-term roadmaps, so it's hard to say when we'll start seeing final products using the new Flashtec NVMe 3108 controller. Most of our hands-on experience with Flashtec SSD controllers has come from Memblaze's PBlaze5 family, which was jointly developed with Micron and related to their 9xxx series SSDs. Memblaze just announced new models using the 2108 controller, so their 3108-based drives are probably over a year away.