At this point, we are very familiar with ASRock's UEFI BIOS for its Z490 models, with a very consistent set of menus and customizable settings. The only differential is the color scheme of the firmware, with a predominantly black and yellowish theme for the Z490 Taichi, while the Phantom Gaming series models opt for a red and black color scheme. 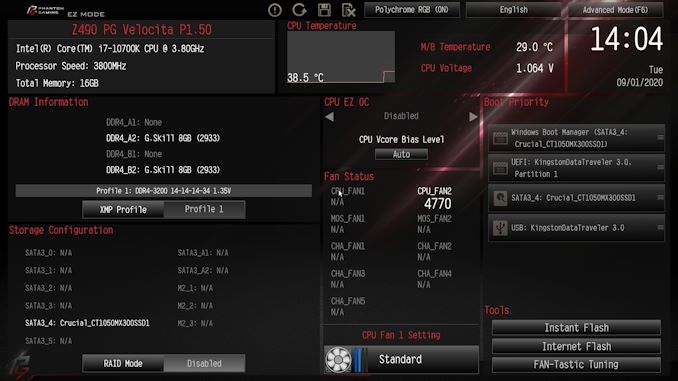 ASRock's UEFI BIOS for Z490 has two primary modes, basic and advanced. Focusing on the basic mode, it provides a quite comprehensive list of information across the entirety of the screen. From top to bottom, there's information for the installed processor, the version of firmware the board is using, as well as a list of installed memory including its speed. Towards the middle is the fan status section, which displays the current speed in real-time of installed fans, as well as the power delivery (MOS_FAN1/2) cooling fans. On the right-hand side is a boot priority listing in which users can click and drag the desired boot order, with one-click access to ASRock's Instant Flash, Internet Flash, and FAN-Tastic Tuning tools. 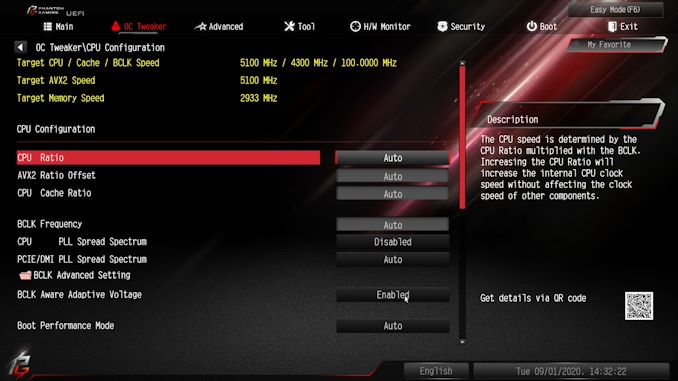 Pressing the F6 key will alternate between the basic and advanced modes, with the latter including the vast majority of the board's firmware features. The most comprehensive section is the advanced section with multiple menus including the OC Tweaker, Advanced, Tool, H/W Monitor, Security, Boot, and Exit. Each of these is self-explanatory, but perhaps the busiest area is in the OC Tweaker section, where all of the overclocking settings reside. 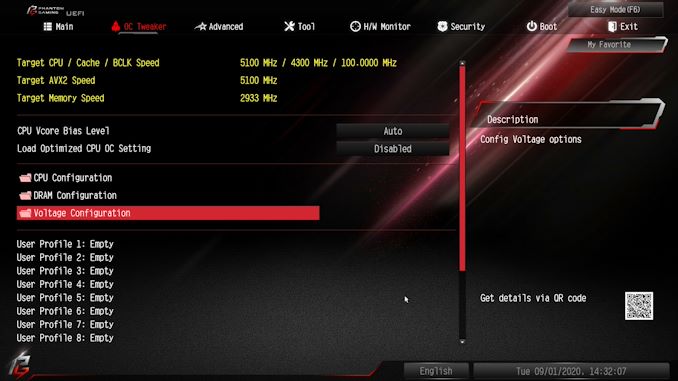 ASRock separates the settings into different sub-menus, including a dedicated section for CPU, voltage, and DRAM settings. Each submenu provides a wide variety of options, with CPU ratio and BCLK adjustments, as well as CPU AVX rations all available to customize. The CPU section also hosts all the relevant power settings for Intel Thermal Velocity Boost, as well as Turbo and Speedstep settings. The DRAM section allows users to overclock memory and tweak latencies, with a one-click button for users looking to keep things simple and enable X.M.P 2.0 memory profiles. In the voltage section is all of the voltages including CPU VCore, DRAM Voltage, and offer the customization of other voltages such as PLL, PCH, and VCCIO.

ASRock's UEFI firmware is easy to navigate and includes a wide variety of customizable settings, including those for Intel's TVB. While some may argue that splitting the CPU, DRAM and Voltage options into sub-menus within the OC Tweaker section makes this look cleaner, I would prefer to see settings housed together for CPU, e.g, CPU Ratio with CPU VCore. This means users don't have to go backward and forward changing settings between different menus. Overall the ASRock firmware is consistent, useful, and includes the cool HW Monitor and a basic UEFI version of ASRock's Polychrome RGB utility which is a nice touch.

With the ASRock Z490 PG Velocita is a varied selection of software that errs on the side of basic, but still, plenty for users to sink their teeth into. The most prominent applications include ASRock's Phantom Gaming Tuner, which is A-Tuning with a Phantom Gaming inspired GUI, with ASRock's Polychrome RGB utility, its handy App Shop and Live Update tool, as well as Nahamic 3 for audio customizations. Users can install the software from disc included within the accessories bundle, or download the latest versions from the Live App utility, or the official product page on the ASRock website. 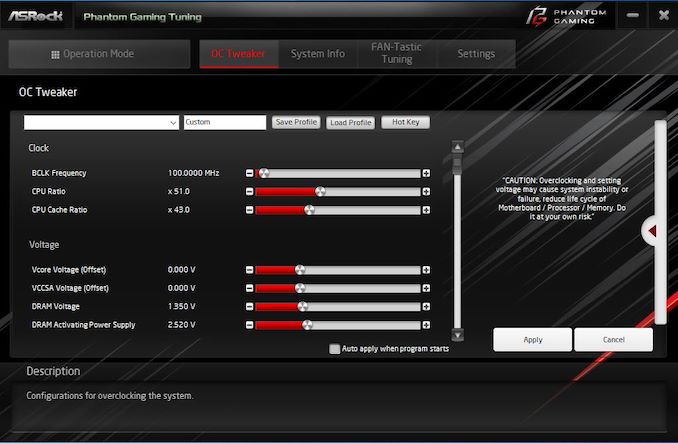