Aside from rough microarchitectural performance claims, we don’t typically talk much about first-party benchmark numbers – they are unverified and we’d rather hold station until the reviews where we can talk about our own testing. There are a couple of numbers that I do want to pull out of AMD’s marketing however, if only to put some markers in the sand compared to numbers we already have.

One of the favorite benchmarks that both Intel and AMD have used over the years is Cinebench, a test scene render for Cinema4D. AMD has been promoting it with Ryzen because it holds a performance lead, whereas Intel prefers to highlight it as an example of a less-than-ideal representative workload. We use it in our test suite as only one of a number of rendering workloads, covering a large user base. From our numbers, Intel and AMD’s best processors have the following results in a single threaded test:

(Note that in the single threaded test, the power limits ultimately should not apply because one core should not consume all the power of the chip. For the Tiger Lake processor, because this is a nominal 15 W TDP part with a 50 W turbo, this actually does go above the power limit with one core active, as it scores 554. As a result, the 50 W mode with a 28 W TDP was used and scores 595. This is more akin to a desktop processor anyway.)

Whichever way you slice it, whether you consider the lead a 17% lead from desktop-to-desktop, or a 6% lead from best-to-best, one thing is clear that if this result is correct, AMD will have the single threaded performance crown.

The previous time that AMD truly held this title was over a decade ago, and ever since the company has been playing catch-up. The argument over having enough single thread performance, if these results are correct, is one that AMD can fight toe-to-toe on. Not only that, but in AMD’s marketing materials, they believe it is a clear cut winner.

This sort of metric also extends out to gaming, which has been a contentious issue since Ryzen enabled AMD to play in this market again. AMD’s numbers here focus on 1080p gaming for two reasons: firstly it’s an area where CPUs are more important for performance, but secondly because they cite that 1080p monitors are still the bulk of monitor sales for gamers, especially when looking at high refresh rates.

This latter one is important, as when the Core i9-10900K was released, there as a strong marketing message that this was the best gaming CPU available on the market. Now AMD believes it can make that claim and take the crown. The important element for AMD to manage however is availability – the availability of the 10900K has been so varied that Intel quietly released the 10850K to manage expectations. If AMD can put enough Ryzen 9 5900X processors into the hands of people that want them, then Intel has a bigger step to climb to regain the title when it will reportedly launch its Rocket Lake processors in Q1 next year. 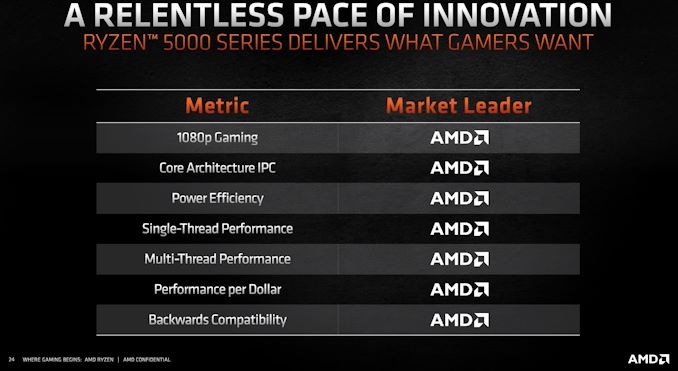 As always, we will wait until we have the hardware on hand to form our own conclusions. These results are AMD first party tests, so the usual standards of caution apply. AMD has a strong history of making accurate claims, confirmed by our testing in recent years, but we still recommend waiting for our review.

As always, AMD is keen to highlight that the new Ryzen 5000 processors are supported in currently available motherboards. Due to the long life cycle of the AM4 platform, there has been some segmentation between chipset and processor support, however AMD this time around has made it very clear when it comes to supported chipsets. AMD has split its instructions in two.

For 500 series chipset users, motherboards firmware that supports the new hardware should already be available. Users will need to ensure that a minimum AGESA version of 1.0.8.0 is installed which will ensure that the system will boot. For full support and performance, users should update to AGESA 1.1.0.0 for the best experience.

For 400 series chipset users, AMD is currently hard at work with motherboard partners to update their firmware stacks. AMD expects the first beta BIOSes with Ryzen 5000 support to be made available from January, however part of this will be motherboard manufacturer dependent. Full release BIOSes will be at a later date. When asked if the new 5000-series firmware for 400-series chipsets will remove support for older processors, AMD said it would be on a case-by-case basis depending on how the motherboard vendor wanted to enable support. 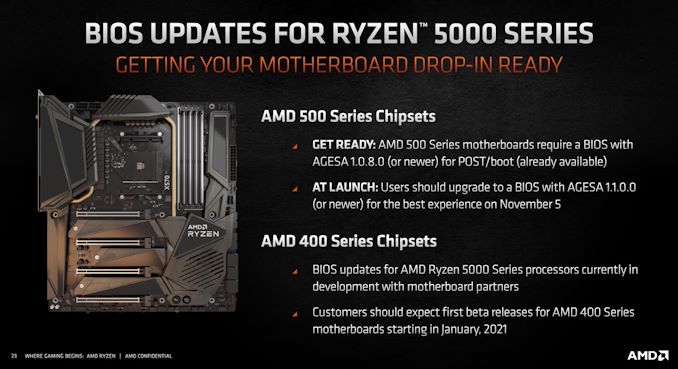 For users that purchase motherboards that do not have the required BIOS support for Ryzen 5000, the Processor Loan Boot Kit programme will still be available.

A Word on Sticker Shock

It is hard not to notice that AMD is raising the prices of its hardware for this new generation. The company believes that it is truly in a winning position, and that better hardware in the market deserves to be priced at a level that matches this. For any competitive business owner with a belief of a better product, finding that right balance of demand and price is always critical to how to manage sales and ultimately market share.

Anand once said a very insightful phrase to me. “There are no bad products, only bad prices.”

So with AMD asking for another $50 on these processors, is that a lot to ask?

AMD’s argument is that, for performance per dollar, it still retains a healthy lead over its competition in each market segment. The spokespersons were keen to point out that they still remember where AMD has come from to reach this level of performance, and understand that a metric such as performance per dollar has always been high on the list of requirements from its most passionate users. The difference this time around is that, because AMD is claiming it has the best performance on the market, it can now charge that slight premium but still offer a more compelling product.

The success of AMD’s Ryzen 3000 family is easy to see. It offers a very attractive performance per dollar proposition, and nine of the top ten processors on Amazon’s best sellers list are from AMD. Here’s that list, with the pricing as given in our buyer’s guide last week:

This is an impressive list, however there a theme I have noticed. Starting from the top, the first four best-selling processors are below $299. The lowest Ryzen 5000-series processor in this launch comes in at the $299 price bracket. Out of that top nine, only #5 and #6 are above $299. This is a clear indication of where the bulk of the market is, especially as AMD is likely in increasing both market share and revenue.

In discussing the pricing with AMD, I noted that the new Ryzen 5000 processors are not only replacing hardware with a $50 higher MSRP, but also replacing hardware that routinely sells below MSRP. This makes the differences more akin to $90-$150. This of course changes some of the dynamic when we start discussing performance per dollar.

AMD’s response to this commentary was the one I would have given if I were in their position. The Ryzen 5000 series is a new product, and the claim of market leading performance means that the early adopters and AMD enthusiasts that want the best on day one will be able to get the hardware they desire. During the initial phase in almost all launches, users looking for the best bang-for-buck build will always look to purchasing the previous generation, which is almost always offered at a good discount as stock transfers to the latest product. AMD believes it has set the pricing of the new Zen 3 processors where it remains competitive, but still balances the message that AMD claims it has the best, most efficient processors.

For users looking for processors under that $299 mark, or more offerings at the 65 W TDP, we expect AMD to look at expanding the Ryzen 5000 product list over the next six months. No exact word from AMD was given about what might come in the future. I even asked about Threadripper with Zen 3, but as expected there was no official comment.

As for the processors announced today, November 5th is the date to put in your diary. On this date, reviews will go live, details about the microarchitecture will be revealed, and processors will be available. We’re already pre-testing a LOT of hardware for our review. Let us know what comparisons matter most to you.