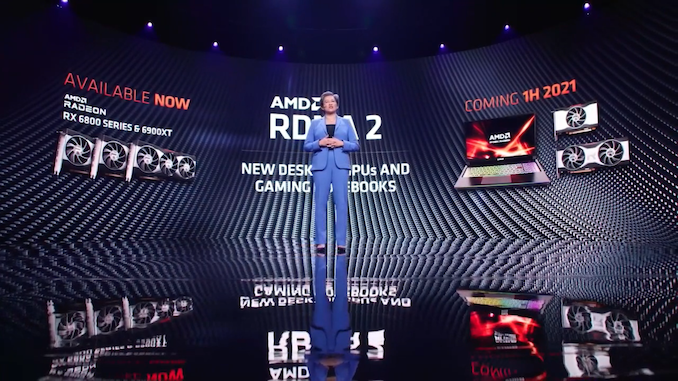 The recent launches of high-end graphics cards from both sides of the aisle has left a number of questions on the table about what will be offered for those of us unwilling or unable to either find $400+ for the latest generation (or more due to low stock pressure). Both AMD and NVIDIA have focused, naturally, on the high-end of the market as that is where a good chunk of the revenue is, however we are waiting for both companies to filter the latest technology into something a little more mainstream. Neither company had said anything about their plans here, until AMD’s keynote at CES today.

The company looks set to bring to market RDNA 2 solutions for mid-range desktop discrete graphics cards models in the first half of 2021 (H1 2021). Based on the images showcased during AMD’s presentation, compared to the current RDNA 2 solutions, these cards appear to be less bulky, along with versions that only need a single fan.

These are almost certainly built on new silicon – rather than the Navi 21 GPUs used in their 6800 series cards, perhaps something like Navi 23, with cut down compute units and/or memory support. There are also questions as to the state of AMD’s Infinity Cache on these lower models, whether it still exists or is reduced, and then how that all ties into performance, power, efficiency, and then ultimately cost. All RDNA 2 hardware supports DX12 Ultimate, and all that entails.

AMD is keeping tight lipped at this time, however AMD did mentioned that mobile graphics solutions will also be coming to market in the first half of the year.