Due to the global pandemic, this year’s annual Computex event in Taiwan is being held virtually, but all the big-name companies have keynotes to present their latest news and wares. Intel is no different, and this year the hot ticket items stem from an expansion or ‘refresh’ of their Tiger Lake-U series processors (as we exclusively confirmed at AnandTech in April) but also the first fruits of an Intel 5G solution developed through the partnership with MediaTek.

At the start of the year, the lay of the land for Intel in the second half of 2021 was confusing. The company was promising to deliver its 12th Generation Core ‘Alder Lake’ portfolio to both desktop and mobile by the end of the year, and there was some confusion as to which market was going to get the hardware first. As Intel ramps up its 10nm product lines, and as silicon supply chain shortages are slowly rectifying themselves, the initial expectation was that Alder Lake was to be introduced first for mobile processors, given that these are usually smaller and easier to bring to market. With the Q1 2021 launch of Rocket Lake (11th Gen) for desktop, it would also make sense to launch a mobile product first as that was launched back in Q3 of 2020 (Tiger Lake-U).

However, as we reported on last month, Intel’s route for processor updates has another stepping stone we hadn’t heard of before. As part of its Partner Connect conference to OEM and retail partners, Intel disclosed that it was preparing a Tiger Lake-U Refresh family for the thin-and-light notebook markets. During Intel’s presentation where the TGL-U refresh was mentioned, it was specified that the refresh will only apply for 15-28 W processors. Today as part of Computex, the first elements of that Tiger Lake-U Refresh are being put in place.

Normally with a refresh we typically expect a full stack of processors, but this time around Intel is only providing two, at least to begin with. At the top of the stack is the new halo processor, the Core i7-1195G7.

The Core i7-1195G7 represents the first time Intel has enabled 5.0 GHz on a U-class processor (not counting the H35 series which aren’t H-series processors but U-series processors with a stupid name). Intel enables 5.0 GHz through the use of Turbo Boost Max 3.0, which is a ‘favored core’ technology and the best core of the processor can boost that high.

The other specifications of the processor include a 2.9 GHz base frequency (at 28W only, Intel hasn’t given the 12W or 15W base frequency), a 4.6 GHz all-core turbo frequency when inside the turbo window, and a new peak 1400 MHz graphics frequency on the Xe-LP Iris graphics configuration of 96 execution units.

The processor has four cores and eight threads, and supports up to 64 GB of DDR4-3200 or 32 GB of LPDDR4X-4266. In our initial report, we had believed that the refresh processors might be the first to support LPDDR5, given that was part of Intel’s specifications when the Tiger Lake-U platform first launched in Q3 2020. We are still yet to see any Tiger Lake-U processor run with LPDDR5, so here’s hoping it comes to fruition perhaps later this year.

In July 2019, Intel sold its 5G assets to Apple. At the time, Intel had been working on 5G technology for some time, but it was very late to the game. The company had a number of key design wins on 4G, but reports of a lack of performance and power efficiency compared to others in the market. Ultimately Intel decided to sell its faltering smartphone modem business that had never actually turned a profit to Apple in order for Apple to develop its own vertically integrated design. Intel, now without a 5G solution, had to call on third parties for cross-branding. Insert MediaTek.

In November 2019, Intel and MediaTek jointly announced a partnership to bring 5G connectivity to its processors. At the time MediaTek was well underway with its 5G solution, especially with a burgeoning smartphone processor business to support and the need to have a competitive solution with Qualcomm and Samsung. Under the deal, rather than simply rebranding the solution MediaTek created, Intel would be defining its offering in a semi-custom-like arrangement. Today, a long while after MediaTek has been supplying 5G modems with its own mobile processors, Intel is disclosing the first Intel-branded productizable solution out of the partnership, likely based on the T700 announced in the middle of last year. 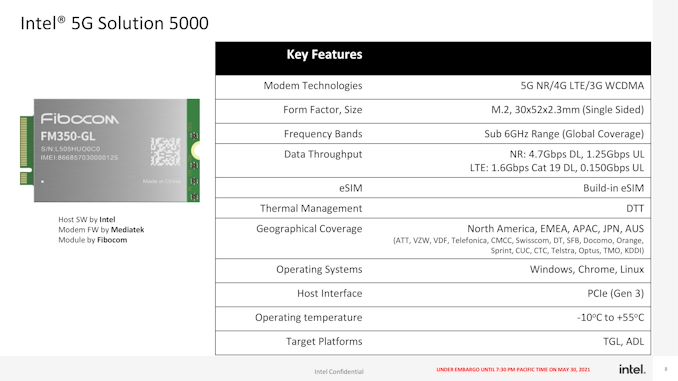 The Intel 5G Solution 5000 is an M.2 module with an odd size. Rather than being a standard 2230 or 2242 module, which means it would be 22x42mm, the unit is actually 30x52mm. Over a PCIe 3.0 interface, it supports 5G Sub-6 GHz (the wider slower version of 5G), 4G LTE and 3G WCFMA, with global geographical coverage to support the following carriers:

Intel is targeting the platforms for Tiger Lake and Alder Lake, but Acer has already announced a home router/base station with the technology.

As a sneak peek, Intel also disclosed the next generation NUC Extreme kit, based on 11th Generation Tiger Lake-H processors. The new design follows Intel’s PCIe Element strategy, whereby most of the machine is on one PCIe card and a full GPU is connected through a combination riser, all in a single box, allowing for a premium gaming experience with a mobile processor. 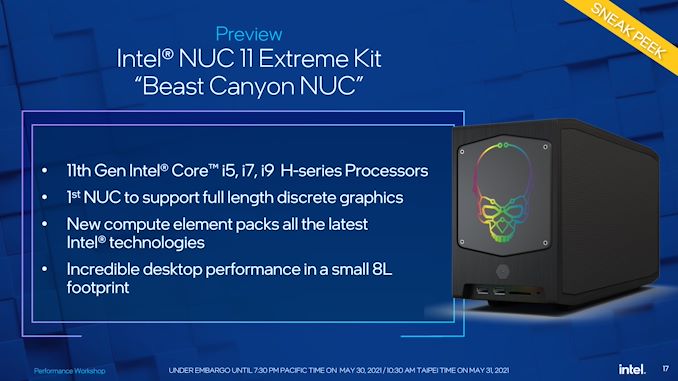 The preview we saw showcased the new chassis, with Intel’s RGB skull logo. We were told to expect more information later in the year from the NUC team.