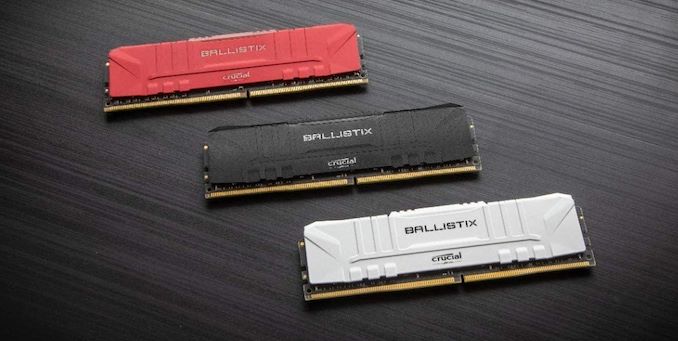 Underscoring the fast-paced nature of the computer hardware market, Micron this week has decided to discontinue all of its current Crucial Ballistix memory products. The move to end-of-life (EOL) these products covers the entire Ballistix lineup, such as the vanilla Ballistix, Ballistix MAX, and Ballistix MAX RGB series. Word of this change comes from a press announcement from Micron, Crucial's parent company, and marks the impending end of the line for its popular consumer-focused line-up.

Over the years, I have personally used many of Crucial's Ballistix series memory for different builds, even back as far as the days of its DDR2-800 kits with bold and stylish gold heatsinks. The latest Ballistix series for DDR4 mixed things up with a whole host of different color schemes such as white, black, and even those adopting integrated RGB heat spreaders designed to offer users varying levels of customizability. It seems those days are now set to come to an end, as Micron has decided to call time on the popular series designed for enthusiasts and gamers.

Despite there being no officially stated reason from Micron for the decision to cut its popular and premier consumer-focused Ballistix series from its arsenal, the press release does state, "The company will intensify its focus on the development of Micron's DDR5 client and server product roadmap, along with the expansion of the Crucial memory and storage product portfolio".

It should be noted that Micron or Crucial never advertised or mentioned the Ballistix brand during the market's transition from DDR4 to DDR5 memory. It seems that the decision wasn't a spur-of-the-moment one and that Micron, which is one of the three main DRAM manufacturers globally along with SK Hynix and Samsung, is looking to turn its attention to satisfying the growing demand for its server hardware and client-based customers.

Finally, it should be noted that the memory discontinuation doesn't affect Crucial's consumer storage products, such as the Crucial P5 and P2 NMVe M.2 storage drives, or Crucial's X8 and X6 portable SSDs. It looks as  Crucial will still keep its toes in the consumer sector for storage, at least for now. Still, the glory days of its Ballistix series will be no more, and users can expect to see the brand die out entirely as DDR4 memory is phased out of the desktop platforms in the coming years to come.

BOISE, Idaho; Feb. 16, 2022 – Micron released the following information about a change to its business strategy for Crucial memory.