"One more thing," the most anticipated words in a keynote speech given by Apple CEO Steve Jobs. The final major announcement of a Jobs keynote, one more thing is usually Apple's biggest and most secret product or project, previously having introduced items such as the MacBook Pro, various iPods, and AirPort 802.11 products. So whenever Jobs says those three words, the technology community tends to be all ears.

Not one to break tradition, at this year's Apple Worldwide Developer's Conference(WWDC), Jobs closed as always with one more thing, and as usual the audience got the unexpected. This year's conference and one more thing will likely be at the top of any top 10 lists for some time to come however, for the one more thing wasn't a new Apple product at all, it was Safari for Windows.

Safari, Apple's custom web browser for Mac OS X, has since its inception played a fairly minor role on the world wide web due to being limited to modern Macintosh computers, and hence a role and market share limited to the size of the Mac OS X install base. This has been scheduled to change for some time now as with the impending release of Apple's iPhone smartphone, Safari will be the shipping browser there too, with all indications of the iPhone quickly selling out. However nowhere in these public plans was a version of Safari for Windows, which may very quickly eclipse the market share effects of the aforementioned iPhone.

Given this unexpected release, it has taken very little time for Apple to drum up a lot of interest in Safari - having already passed 1 million downloads - nor has it taken long for a multitude of theories of sprout on and off of the WWDC show floor. It's not every day that someone releases a new web browser after all.

We have covered Safari in the past with our Mac OS X 10.4 review and A Month With A Mac series, with very little changing between Safari 2.0 and 3.0 other than Windows support. So rather than rehash those articles for anyone unfamiliar with Safari, we recommend reading those reviews first before continuing. 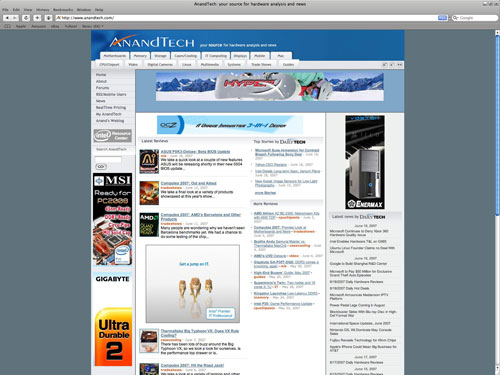 Since the release of Safari 2.0 when Apple managed to take care of many of the performance issues with Safari, Apple has been trying to build a reputation for Safari as a faster browser, something they have only been marginally successful at so far. Having finally corrected a number of their performance issues in Safari, this is the key point Apple is trying to push with Safari 3, and we're eager to put it to the test. However it takes more than speed to crack the browser market, including memory usage and a slew of generally subjective issues within a browser such as flow. Although Apple is neither a newcomer to the web browser market or the Windows market, both markets can be surprisingly fickle and treacherous at times.

Does Safari have what it takes to challenge the dynamic duo of Firefox and Internet Explorer on Windows, or does Apple need to go back to the drawing board? Let's find out.