As the newcomer to the Windows web browser market, Safari needs a hook in order to get a following. As we have previously discussed performance and have come to the conclusion that Safari is not significantly faster than most of the existing browsers, it will be up to the features and other subjective measures to make or break Safari. To that extent there are couple things we like about Safari, and several more that we don't.

Safari 3 in particular introduces a new inline searching feature that goes beyond previous highlighting abilities by removing the focus on the rest of the webpage that doesn't contain the word being searched for. This is far superior to Internet Explorer, which can only highlight a single instance of a word at a time, or Firefox which in spite of its multi-highlight ability can be hard to use in dense page situations. Compared to both of those situations, it's much easier to actually see the searched word on the page. 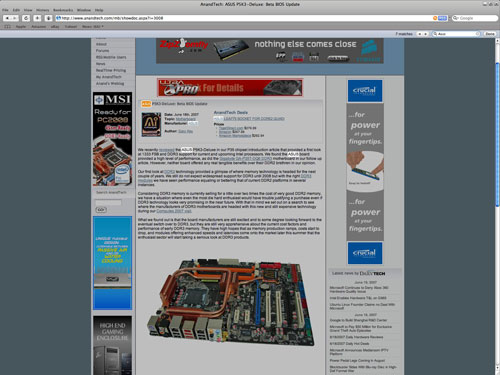 We're also generally fond of the RSS feature as introduced in Safari 2. It hasn't changed for Safari 3, nor does it need to however. RSS features in a web browser are still a bit unusual, and not everyone will be able to use them effectively, but compared to Internet Explorer and Firefox we're more impressed with how Safari handles it.

We're less convinced on the general flow of Safari, and a lot of that has to do with the interface of Safari which we'll get to in a moment. However we've also encountered issues where Safari is slow to respond, such as resizing the window or typing in to the address bar in one tabbed window while something loads in another tab. Both of these will be highly dependent on the browsing habits of the user, but they're definitely annoying when they occur.

The lack of a spell checker, in spite of the menu item still being there is also a disappointment for us. Because the spell checker is actually a part of Mac OS X and not Safari, we understand why Apple wouldn't have been able to easily bring it over, but at the same time leaving the menu is lazy. And more to the point we've suffered more than a few headaches reading forum and blog posts rife with poor spelling, and committed a few snafus ourselves.

Last but not least there's the issue that we and likely anyone else who has or will use Safari for Windows will have immediately noticed: the interface. Apple has a poor habit of sticking to interface guidelines - their own or otherwise - with previous ported applications like iTunes failing to look and act like a Windows application. For iTunes in particular this wasn't a significant problem since jukebox programs usually forgo interface guidelines, but this isn't the case for web browsers.

Apple did such a perfect port of Safari to Windows that it completely and utterly fails to act like a Windows application, and this isn't a compliment. The application window can only have its size adjusted in one corner, the minimize/maximize/close buttons fail to extend to the edge of the window, the title bar is not a different color than the menu bar, Apple uses their own font smoothing technique, the middle mouse button doesn't work on half the things it should, and we could go on. iTunes in spite of its transgressions manages to get most of this correct, so we know Apple can do this, this appears to simply be a case of stubbornness.

This isn't a case of actually caring what Safari looks like so much as it is being able to properly use Safari along side other Windows applications. The close button not extending to the edge of the window for example means that we can't scroll to the top-right corner of the screen when Safari is maximized and click to close the application in spite of the fact that we're not actually over the close button. The middle mouse button not having all of its features means we can't close tabs like we can in other browsers, or do a middle-click scroll like we can in any other Windows application. The use of a different font smoothing technique means that text doesn't look like anything else in Windows, and while we like this technique on Mac OS X it's distracting compared to everything else Windows. Safari even prevents the Windows taskbar from coming up when Safari is maximized and the taskbar is set to auto-hide, which frankly is unfathomable in the Windows world.

All of these interface differences make Safari genuinely hard to use on Windows. For all of the positive aspects we've mentioned above, what good are they if we go mad trying to use the application? If Apple doesn't redesign Safari to follow at least some of the Windows interface guidelines, it may very well have a short life span outside of Mac OS X.