In the race to get a USB3 capable mini-ITX motherboard to market, Gigabyte has today announced the first entry into the arena - the GA-H55N-USB3.  Measuring a tiny 17cm x 17cm, this board is a stark contrast the the Gigabyte X58A-UD9 released last week. 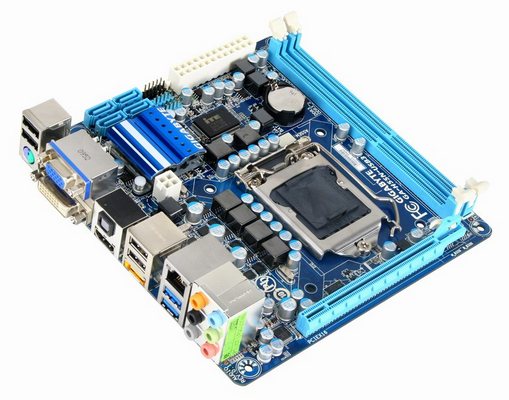 USB3 connectivity is achieved via the onboard NEC uPD720200 host controller to two USB3 ports with a bandwidth of 5Gb/s.  The board also provides Gigabyte's 3x USB Power Boost, allowing USB devices a greater power range to work with and devices to charge quicker.  On the board is a full x16 PCI-E 2.0 slot, four SATA 3Gb/s ports, and two DDR3 DIMM slots supporting up to 8GB.  The back panel features the two USB3 ports, one eSATA 3Gb/s port, four USB2 ports (a further four available from internal headers), Realtek Gigabit Ethernet and 7.1 channel audio, a combined PS2 connection, an optical S/PDIF Out, and HDMI/D-Sub/DVI connectors

According to Tim Handley, Deputy Director of Motherboard Marketing at Gigabyte, "The GIGABYTE GA-H55N-USB3 was designed specifically for users wanting to build the ultimate home entertainment PC".  Usually, a mini-ITX board is just what the doctor orders for such an endeavour, however this also expands into the realm of LAN gaming, where portability and power like to go hand-in-hand.  The H55N-USB3 will support the latest LGA-1156 Core i3 and Core i5 processors with integrated graphics, as well as s1156 Core i7 processors.

Along with On/Off Charge to charge external devices and Gigabyte's DualBIOS providing a backup BIOS in case things go wrong, there are very few things to pick at on this board announcement.  One thing of note is the onboard SATA ports - should a HTPC also become a basic network storage hybrid, more SATA ports would have been a good selling point for the H55N-USB3.  Probably not a huge deal, but looking at the VRM layout we'd guess that HT enabled Lynnfield processor overclocking is going to be limitied - just like other mini-ITX offerings. 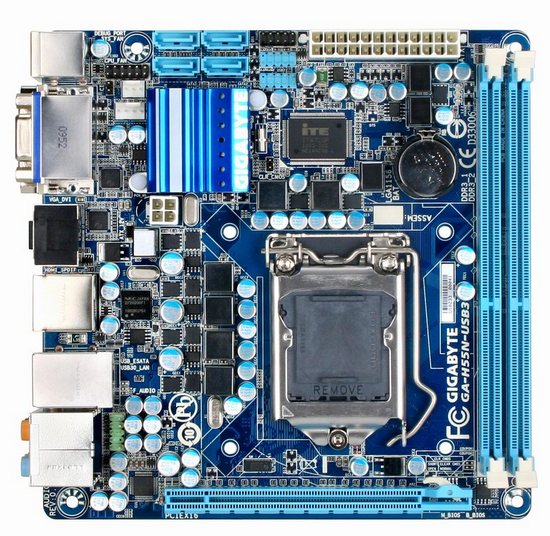