Using the 6-22-2008 build of Iometer I ran a 3 minute long 2MB sequential test over the entire span of the drive. The results reported are in average MB/s over the entire test length: 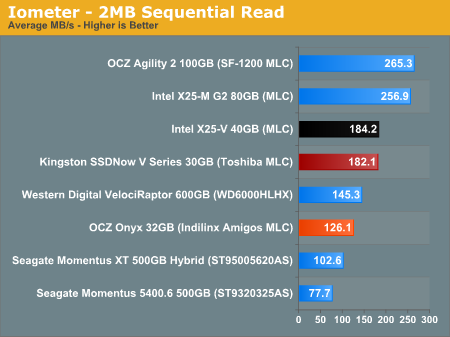 Sequential read/write performance suffers on these entry level drives. Remember that these drives hit their low capacities (and price points) by leaving half of the NAND channels unpopulated, which means in situations where you've got a ton of data to transfer in parallel you're going to be slower than a high end SSD. In read speed the Intel and Kingston drives are limited to around 180MB/s, still faster than any desktop hard drive. Sequential write speeds are slower than 2.5" hard drives however: 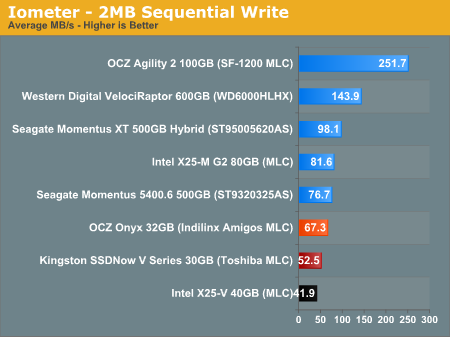 This test reads/writes 4KB in a completely random pattern over an 8GB space of the drive to simulate the sort of random access that you'd see on an OS drive (even this is more stressful than a normal desktop user would see). I perform three concurrent IOs and run the test for 3 minutes. The results reported are in average MB/s over the entire time. 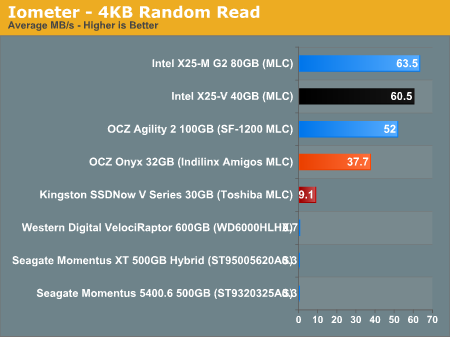 Improved random read and write performance are SSD advantages. Even the cheaper drives hold this advantage over the fastest hard drives. While the 600GB VelociRaptor is stuck at 0.7MB/s in our random read test, Intel's X25-V delivers 60.5MB/s. The best performer here out of the value drives is the Intel X25-V, followed by OCZ's Onyx. 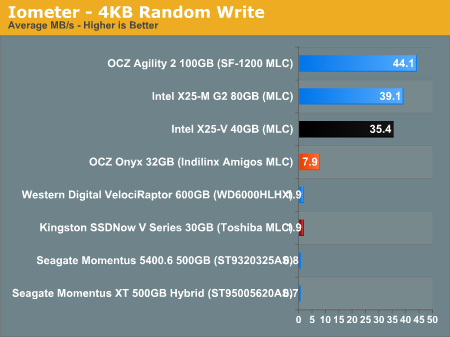 Many of you have asked for random write performance at higher queue depths. What I have below is our 4KB random write test performed at a queue depth of 32 instead of 3. While the vast majority of desktop usage models experience queue depths of 0 - 5, higher depths are possible in heavy I/O workloads: 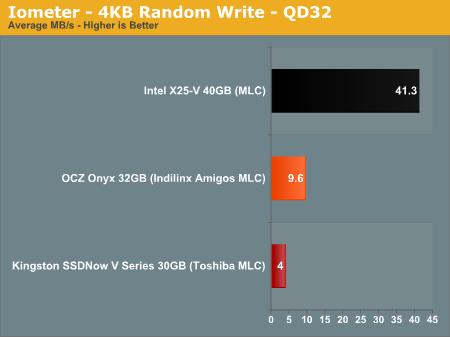 All of the value SSDs improve performance as they are able to extract more parallelism out of the data and thus get better NAND/controller utilization, but the standings don't change: Intel is on top, followed by OCZ and Kingston at a distant 2nd and 3rd place.