You Know It's a Clevo

It's actually difficult to really break down the Clevo B5130M in terms of its appearance because I'm pretty sure no other manufacturer, not even Lenovo with their ThinkPads, has this kind of uniformity across all of their notebooks. Don't believe me? Compare the B5130M to the other Clevo units we've reviewed.

Starting from the top, there's the smooth, black matte plastic lid. Once again, the lid and screen offer an amount of flex that's a little alarming though nowhere near as bad as the W870CU's. Hinges are fairly stable, though, so the screen is unlikely to wobble much when the notebook is in use. When we move inside, we find the single instance of glossy plastic on the entire notebook. 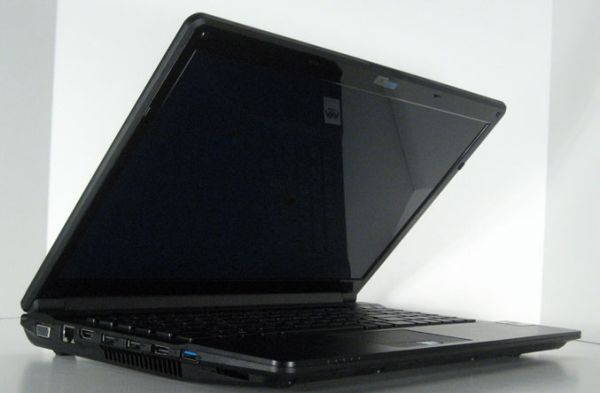 Vivek echoed my sentiments in his review of the ASUS UL80Jt, and once again Clevo makes the same ridiculous mistake. This entire notebook is black matte plastic, except for the screen bezel, which is glossy. Seriously, Clevo? We're going to keep putting glossy plastic in the one place it's most likely to pick up fingerprints? I do think Clevo should be commended for generally avoiding glossy plastics on their notebooks (though most vendors have begun to follow suit), but this is the absolute worst place to use them, barring the keyboard (really Toshiba, why'd you think that was a good idea?)

The problem with the black matte plastic that Clevo uses is that it tends to feel cheap instead of rigid, and while a candy shell is terrific for Skittles it makes for a lousy notebook housing. As a result, the B5130M can actually be flexed a little bit. This isn't a dealbreaker and we've seen worse-built notebooks (unfortunately, almost always built by Clevo), but it continues to be a problem that plagues Clevo specifically.

Oh, and the keyboard. Jarred has expressed a kind of dislike of Clevo's keyboard layout with sentiments similar to my feelings for Acer and their nightmarish island-style keyboard, and he does have a point. It's another problem that could be easily remedied and is made all the more frustrating because the keyboard itself is fairly comfortable to type on, but here it is: the dedicated 10-key is bar none the worst implementation we've ever seen. The whole point of a 10-key is that you should be able to touch-type it, but you can't because it's so squished. There's room on this notebook to stretch the keyboard coast-to-coast, but Clevo continues to squish the 10-key to the point of impracticality, and it brings casualties with it: document navigation keys are entirely Fn+arrow based (although at least this is marginally logical).

The touchpad isn't a big winner either. It's adequate and not the worst I've used, but the mouse buttons feel very loose and prone to popping off even though they're recessed.

Popping the bottom panel off reveals the B5130M's delicious insides, but strangely Clevo attaches the fan to the panel instead of the inside of the notebook. First, the bad news: no MXM on the GeForce GT 425M. You're stuck with it. That said, the inside is spacious and has a free mini-PCIe slot, and the processor is at least upgradeable.