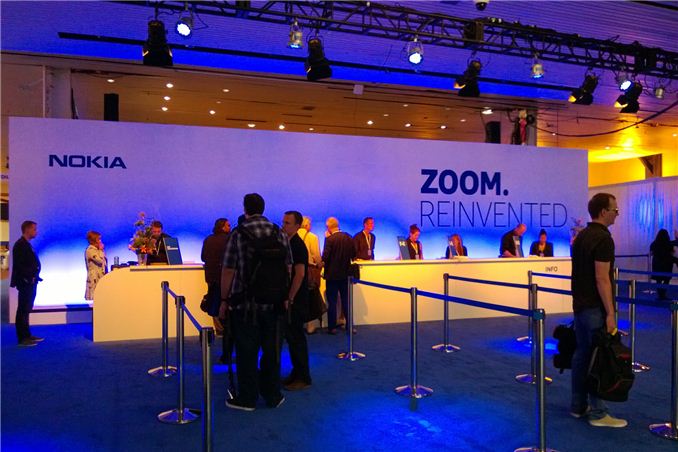 11:42AM EDT - Time for questions now, well that looks like it, the 1020 looks very interesting

11:41AM EDT - Other markets starting this quarter in China and key European markets, and exclusive device variants to Telefonica to Latin America markets

11:40AM EDT - "Today AT&T sells more Windows Phones than any other carrier" 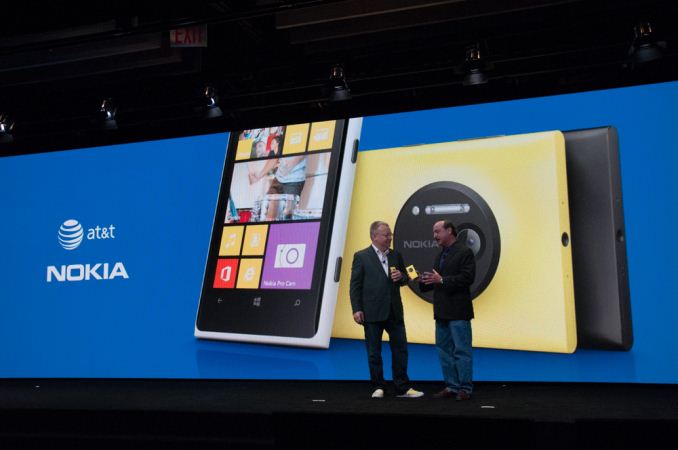 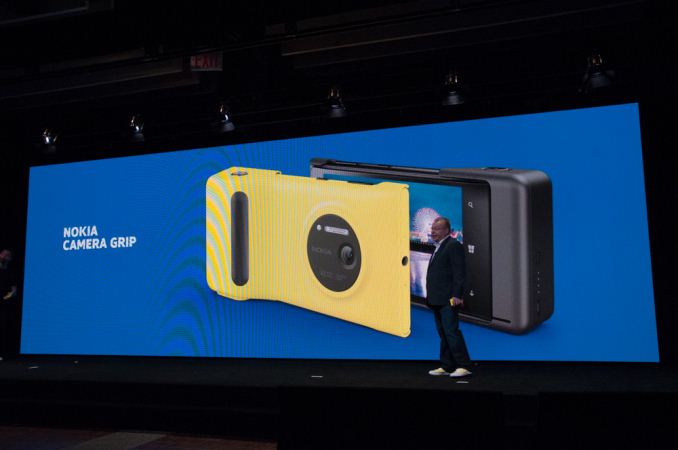 11:36AM EDT - Nokia gear investment continues with the 1020, snap on wireless charging shell and nokia camera grip with a tripod mount and 1020 mAh battery in the camera grip

11:35AM EDT - The camera development SDK will be available today at developer.nokia.com

11:34AM EDT - So far the camera UIs that Nokia have been showing off look great, lots of control

11:33AM EDT - CNN, vyclone, yelp, foursquare, path, flipboard, panagraph, snapcam, and hipstamatic all use the SDK

11:32AM EDT - Inviting developers to create unique experiences with a Nokia imaging SDK

11:30AM EDT - Now we're seeing the usual assortment of Nokia-specific applications, like Here maps, I want to see more of that camera UI, didn't really get a good picture of it, but I'm reminded of the Galaxy Camera interface with those circles 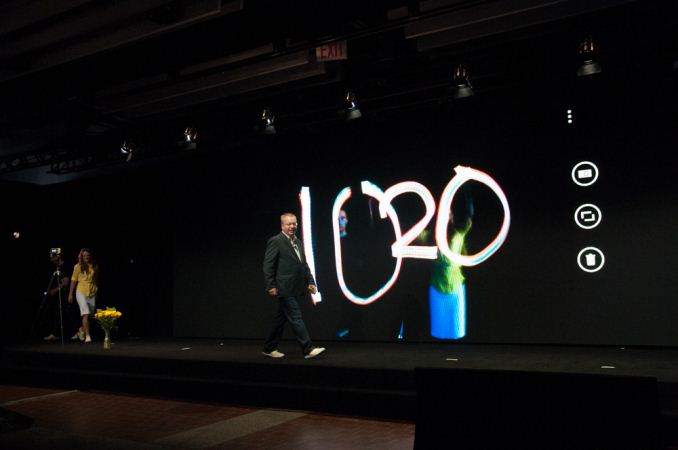 11:26AM EDT - Very cool looking manual focus interface with a slider that rotates

11:25AM EDT - AWB, manual focus, ISO settings all in this camera application 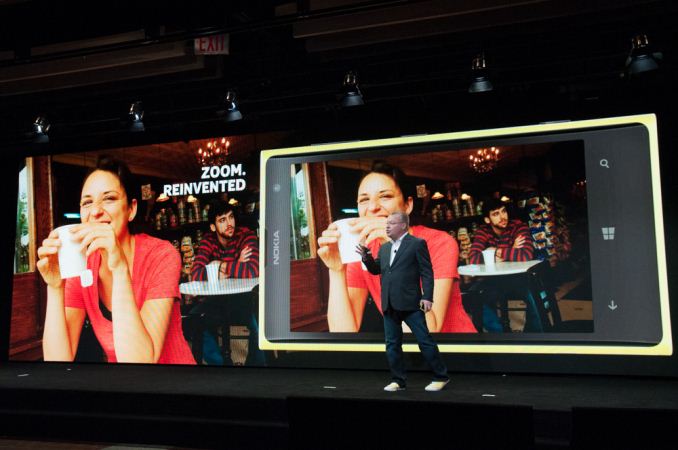 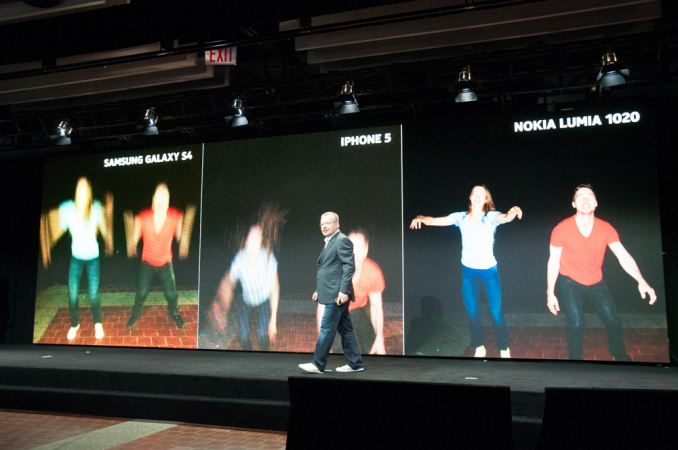 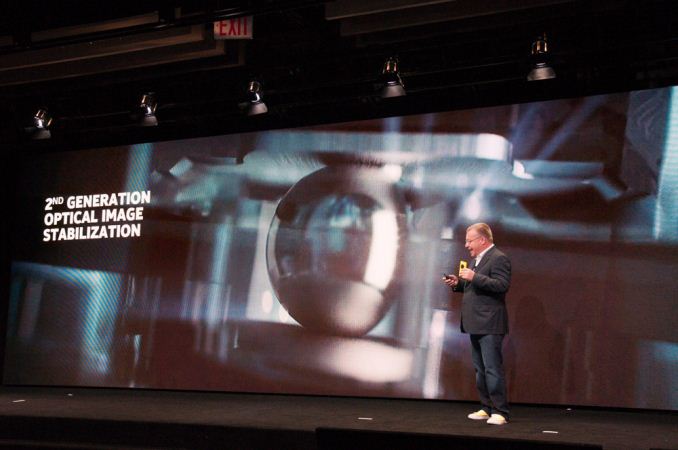 11:15AM EDT - The 1020 uses ball bearings around the housing and magnetically driven motors in its OIS system 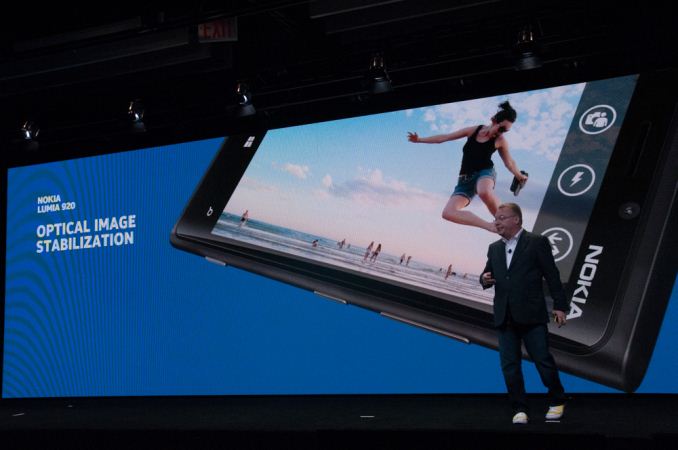 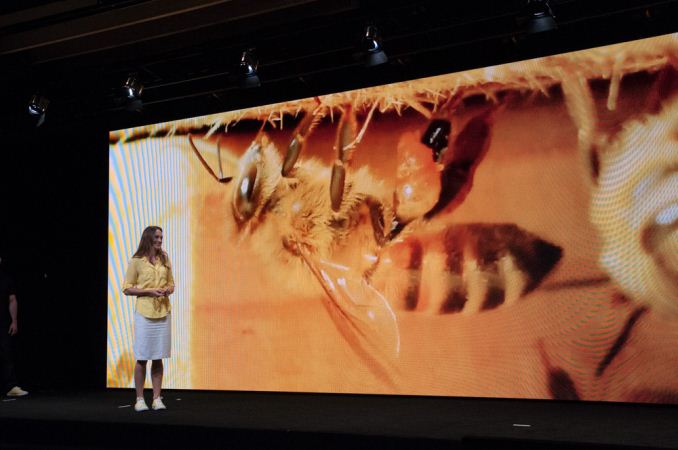 11:13AM EDT - Oversampling also processes image data for video, up to 1 billion pixels/sec

11:13AM EDT - Really easy to share the 5 MP oversampled images on social networking and cloud storage 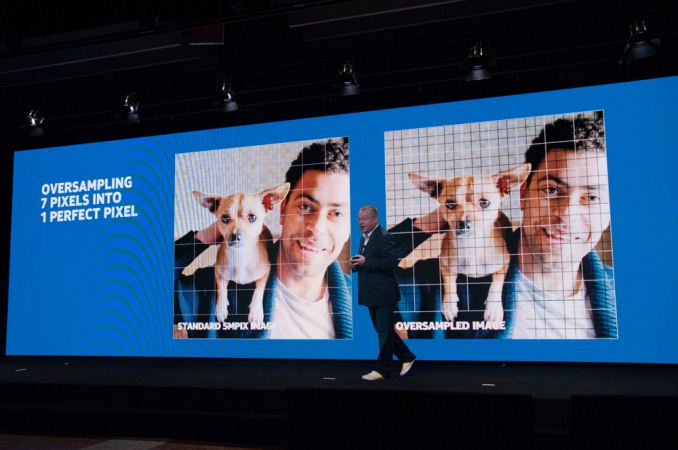 11:12AM EDT - Simultaneously saves a 5 MP oversampled image at the same time, using up to 7 pixels from the sensor

11:10AM EDT - We're going to hear from the team responsible for PureView and the Nokia imaging team 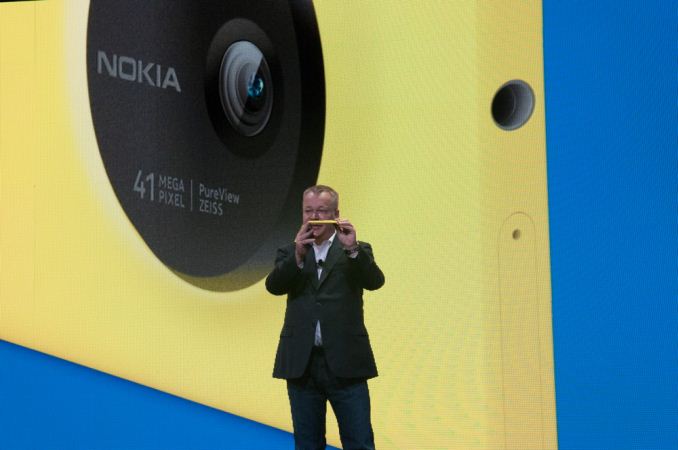 11:10AM EDT - The camera module doesn't look like it sticks out that far at all, not a huge bulge like the PureView 808 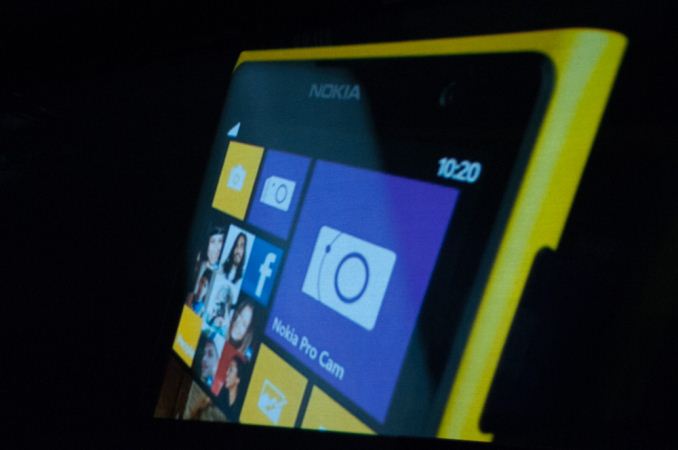 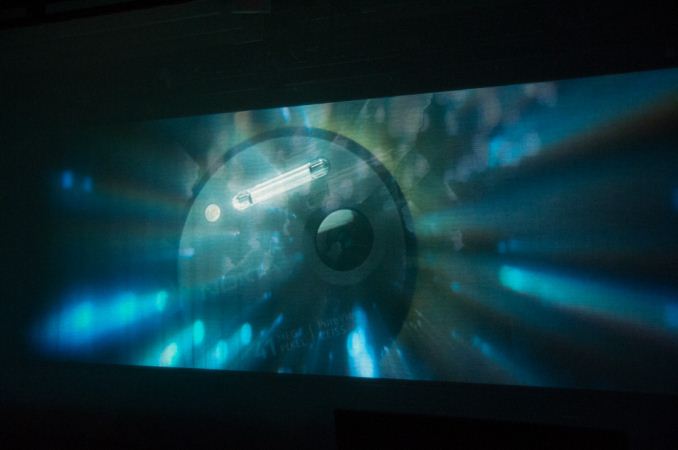 11:07AM EDT - "next chapter in smartphone photography" being introduced today 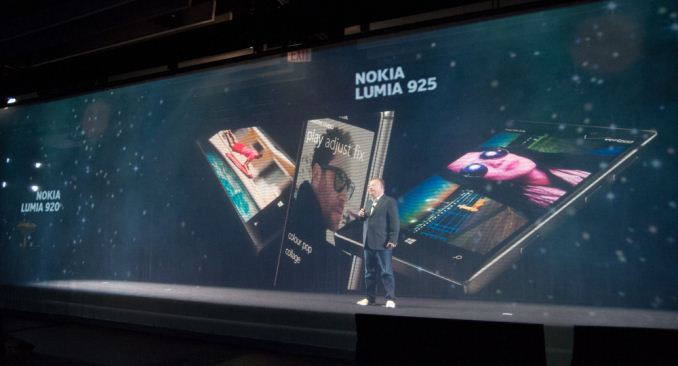 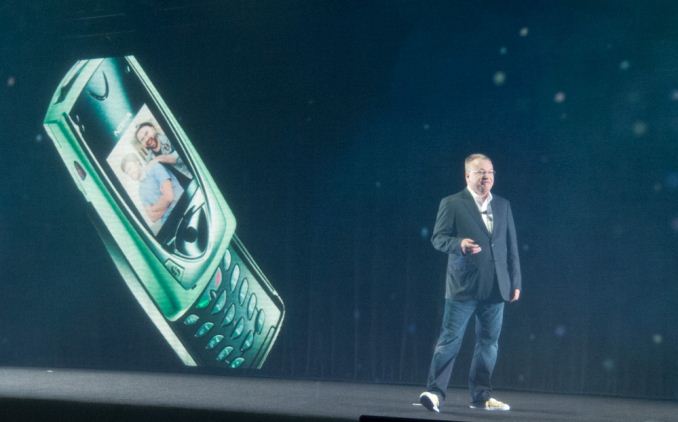 11:04AM EDT - Stephen Elop is out talking about the history of Nokia's cameras

11:02AM EDT - Looking at a video showing the history of photography

11:00AM EDT - Looks like we're going to be getting underway shortly

10:50AM EDT - Obviously because it's likely an MSM8960 inside that means there's bound to be a discrete ISP inside the 1020 somewhere, similar to the beefy discrete ISP on the 808

10:49AM EDT - 41 Megapixels with oversampling and lossless zoom running on a platform I can use could be compelling, that experience was very unique on the PureView 808

10:45AM EDT - If rumors are true, the Nokia 1020 should be like a PureView 808 running Windows Phone. That was my biggest complaint with the PureView 808, while the imaging experience was best in class, the platform it ran on made using the device as something beyond a camera a chore. Running Windows Phone should obviously address that.

10:34AM EDT - This is the first press event I've been at where we have desks like those from school with the little folding table. I feel like there's going to be a quiz later.

10:30AM EDT - We're looking at photos taken on Nokia Lumia smartphones while waiting on the screen here. The projector is surprisingly kind of low res though. 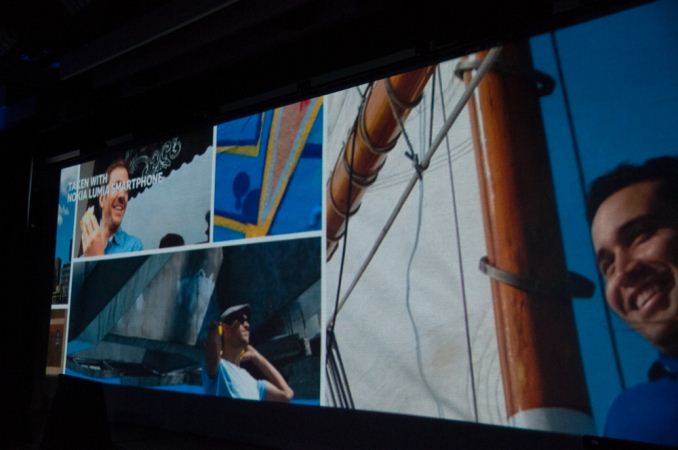 10:26AM EDT - We've got quite a wait in front of us, the event starts at 11 AM eastern, so in roughly 35 minutes things will get underway

10:17AM EDT - One of the things that Windows Phone handset makers do have control over is the imaging experience, which is good for Nokia since it allows things like PureView 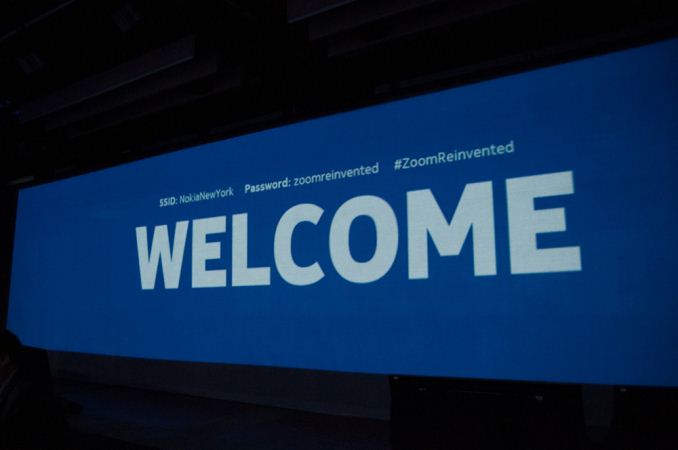 10:14AM EDT - Well, seated and ready to go, it's a nice day in NYC and hopefully we're going to hear about the Lumia 1020 (formerly EOS) which will combine Windows Phone and imaging closer to the PureView 808's system.