Kicking off today is AMD’s annual developer conference, which now goes by the name APU13. There will be several APU/CPU related announcements coming out of the show this week, but we’ll start with what’s likely to be the most interesting for our regular readers: the launch date for AMD’s Kaveri APU. 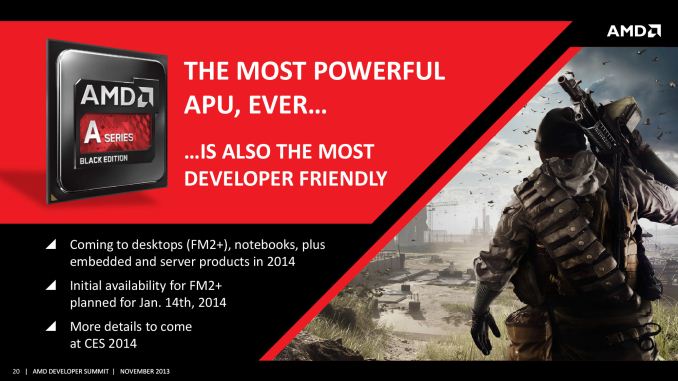 First and foremost, AMD has confirmed that Kaveri will be shipping in Q4’13, with a launch/availability date of January 14th, 2014. For those of you keeping track of your calendars, this is the week after CES 2014, with AMD promising further details on the Kaveri launch for CES. 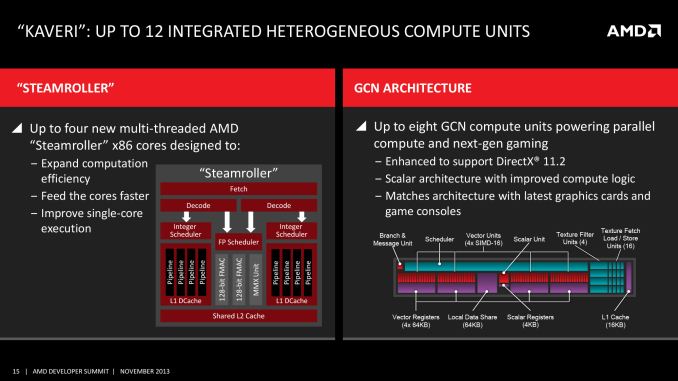 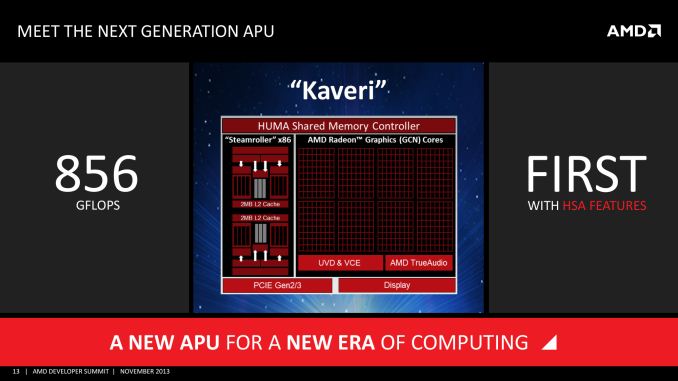 Second of all, we have confirmation on what the highest shipping APU configuration will be. Kaveri will have up to 4 CPU core (2 modules), which will be based on AMD’s latest revision of their desktop CPU architecture, Steamroller. Meanwhile the GPU will be composed of 8 GCN 1.1 CUs, which would put the SP count at 512 SPs (this would be equivalent to today's desktop Radeon HD 7750). Furthermore AMD is throwing around a floating point performance number – 856 GFLOPS – which thanks to some details found in AMD's footnotes by PCWorld gives us specific clockspeeds and even a product name. A10-7850K CPU clockspeed 3.7GHz, GPU clockspeed 720MHz.

Third, in a departure from how AMD launched Trinity and Richland, Kaveri will be coming to the desktop first. The January 14th date is for the availability of desktop socket FM2+ Kaveri APUs, with server and mobile APUs to follow (these are presumably some of the CES details to come). Pricing and specific SKUs will of course be announced at a later time, and there wasn’t any clarification on whether this was just for OEM hardware, or if we’ll be seeing retail CPUs too. 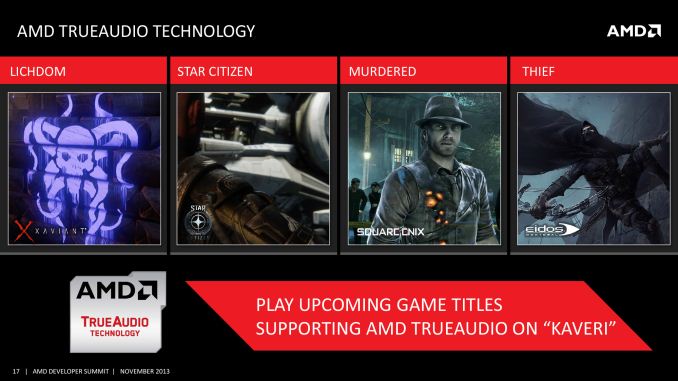 Finally, AMD has confirmed on the GPU side that Kaveri will be shooting for feature parity with AMD’s latest discrete GPUs, by supporting many of the same features. Specifically, TrueAudio will be making an appearance on Kaveri, bringing AMD’s dedicated audio processing block to their APUs as well as their GPUs. On the discrete GPUs this is a move that was mostly about functionality, but on Kaveri it should take on a second role due to the fact that it’s exactly the kind of CPU-constrained environment for which having dedicated hardware will be a boon. Furthermore, AMD has also confirmed that their new low-level API, Mantle, will also be supported on Kaveri – it is after all a GCN based GPU.

For AMD Kaveri is going to be a big deal; likely the biggest CPU/APU launch for the company in quite some time. Since the acquisition of ATI all the way back in 2006 this is what the company has been building up to: producing a processor with a highly integrated CPU/GPU that allows both of them to be leveraged nearly-transparently by software. Kaveri is the launch vehicle for HSA both as a specific standard and as a general concept for a PC CPU/APU, so it’s something that everyone inside and outside of AMD will be watching closely. 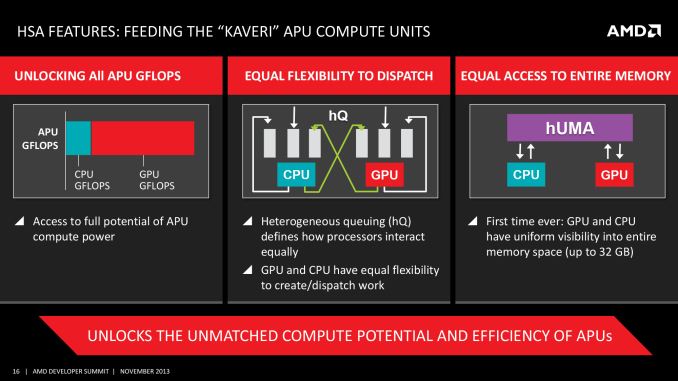