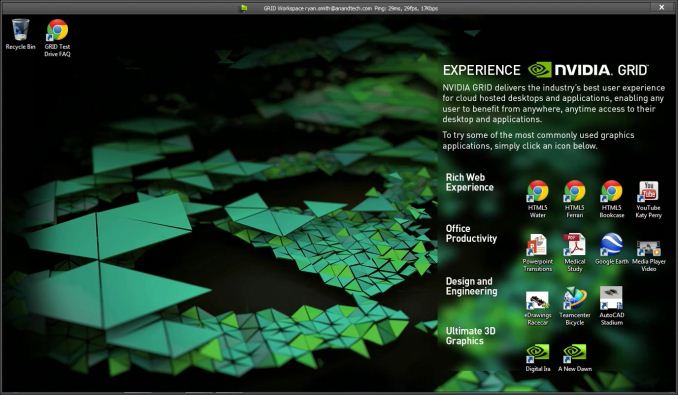 For the last several years now NVIDIA has been heavily pursuing the Virtual Desktop Infrastructure (VDI) market. In NVIDIA’s continuing efforts to maintain and expand their presence in the professional marketplace, VDI offers NVIDIA both a natural outlet for further growth and a necessary avenue to follow to make sure the company doesn’t fall behind. If nothing else NVIDIA has seen which direction the winds of change are blowing, and in the business market those winds have steadily been blowing towards thin client computing – the consolidation of desktops and workstations onto centralized servers, virtualized, and remotely accessed by thin clients.

NVIDIA for their part has chased this market over the years as market conditions and technology allows. While the CPU has been a mainstay of VDI since the very beginning, earlier generations of technology have made little use of GPUs, either emulating a 2D GPU or offering a restricted subset of 3D capabilities via API translation and GPU time sharing (RemoteFX). It’s only in the last couple of years has the technology come into its own for GPUs, with both the necessary hardware and software hitting the market. Consequently with GPU virtualization made practical, businesses jumping into the virtualization pool have been looking at what they can do to virtualize their GPU-wanting desktops and workstations, and NVIDIA in turn has been gearing up to provide for that market.

The lynchpin in NVIDIA’s efforts has been their Kepler GPUs, which first hit the professional market in 2013. Kepler’s principle technology features for this market – the GPU Memory Mapping Unit (MMU) and the NVENC H.264 encoder – have allowed NVIDIA to offer the kind of resource sharing necessary for efficient virtualization and a method to quickly transmit those virtual desktops to thin clients. Ultimately by putting together a family of Kepler-powered GRID products, including the GRID K1/K2 boards and GRID VCA, NVIDIA hit the ground running on the hardware side and has slowly but surely been landing the software wins necessary to put that hardware to good use. 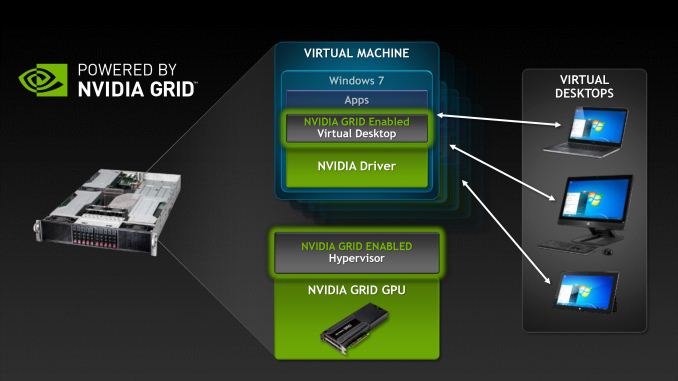 With their technology in hand and the hard problems either solved or in the process of being solved, NVIDIA’s efforts over the last year have turned towards marketing and promotion. For existing customers (particularly those looking into virtualization) NVIDIA wants to convince those customers that GPU virtualization is ready and that they have the best tools for the job. Meanwhile for potential customers making the move to virtualization, NVIDIA seeks to convince those buyers that emulated/translated GPUs are inadequate, and that they need a real GPU for the job.

The end result is that NVIDIA’s spiel for virtualization looks a lot like their spiel for GPUs over the last 10 years: GPUs improve performance in a number of tasks (often greatly so), and now that kind of performance is available on a virtualized basis and/or in the cloud. It’s a simple concept, but an important one to get across as customers look at virtualization and what hardware they need to achieve it. NVIDIA knows that there’s some fraction of the market that is going to be “lost” in the move to virtualization – those users’ desktops will longer need an NVIDIA GPU as they’re virtualized – but NVIDIA sees the rest of the market as being a good fit for their GPUs, and needs to convince their customers of this. 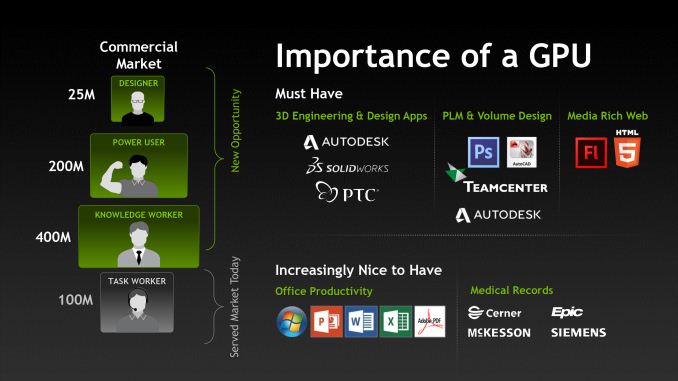 This brings us to today’s NVIDIA announcement, which is the GRID Test Drive. As the saying goes “seeing is believing,” and a big part of NVIDIA’s marketing efforts have involved demonstrating the benefits of GPU accelerated VDI to customers and showcasing just how well it can work. This has not been an easy task for NVIDIA or their customers though, as it has either limited customers to hands-off demonstrations or required hardware to be shipped on-site for live demonstrations. With the GRID Test Drive NVIDIA is seeking to solve the demonstration problem once and for all by giving users hands-on demonstration access without the hardware requirement. How? By making GRID demonstrations available over the Internet. 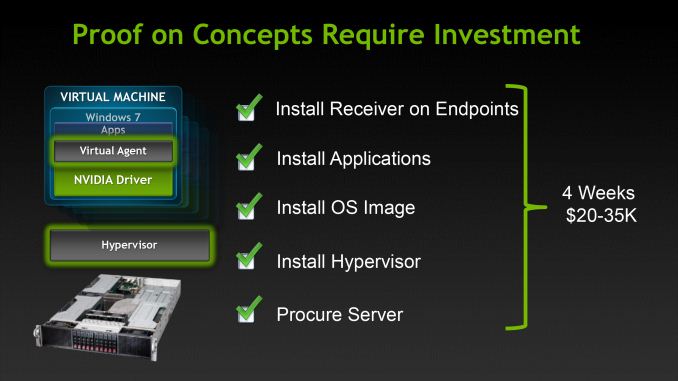 Launching today is the GRID Test Drive. Aimed primarily at business customers looking into virtualization, the GRID Test Drive program sees NVIDIA offering access to GRID instances over the Internet, giving customers a chance to freely test out GRID-backed VDI for themselves.

These instances are operating out of NVIDIA-contracted datacenters on the US west coast, where NVIDIA has setup fleets of GRID-enabled servers running workstation-class instances of Windows 7. Equipped with 8 vCPUs, 15GB of RAM, and pass through access to one of the GPUs on an NVIDIA GRID K520 card (GK104-based), these instances are designed to show off GRID at its full potential, offering plenty of CPU and GPU power for everything up to workstation class applications.

For the purposes of the test drive program, NVIDIA is giving users just short of complete control of their instance, having locked the GRID configuration settings but otherwise giving the user full administrator access to their instance. The instances already come pre-configured with a selection of software and demos – including everything from MS Office to AutoCAD – and with administrator access users are allowed to install any additional software they’d like in order to further test the capabilities of GRID. The only limitations are that the GRID setting are locked at 1366x768@30fps with a maximum bitrate of roughly 10Mb (to conserve bandwidth) and that the test drive is limited to 24 streaming hours. Thereby giving users a chance to try out GRID without letting the demonstration go for too long. 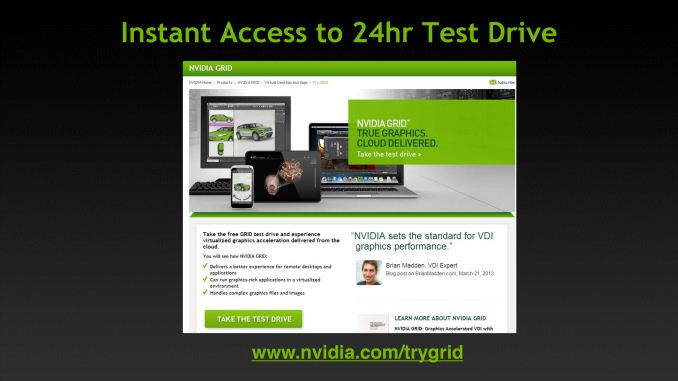 Just as GPU virtualization itself it’s a pretty simple concept, but it’s an important one for NVIDIA as it allows them to far more readily demonstrate the capabilities of their GRID products and let customers investigate it at their own pace. Ultimately NVIDIA will be expanding the program to other locales – instances in Asia and Europe are on the schedule – but for the moment the only instances are available on the US west coast.

Ahead of today’s launch of the GRID Test Drive program, NVIDIA briefed us on the program and gave us the chance to play with a test drive instance. While this is far from a complete review of the GRID ecosystem, we did want to share our thoughts with the test drive and point out what works and doesn’t work, and where the limits of offering it over the Internet will impact performance as opposed to a local setup (which is how most businesses will be operating).

Our instance ended up being served out of one of Amazon’s Oregon AWS datacenters, giving us a solid sub-30ms ping to the server hosting the instance. It goes without saying that for something as latency sensitive as VDI, location and bandwidth will play a huge part; even at 30ms the latency is notably worse than what a local installation will behave like, but it’s by its very nature a good approximation of what VDI over the Internet will perform like. 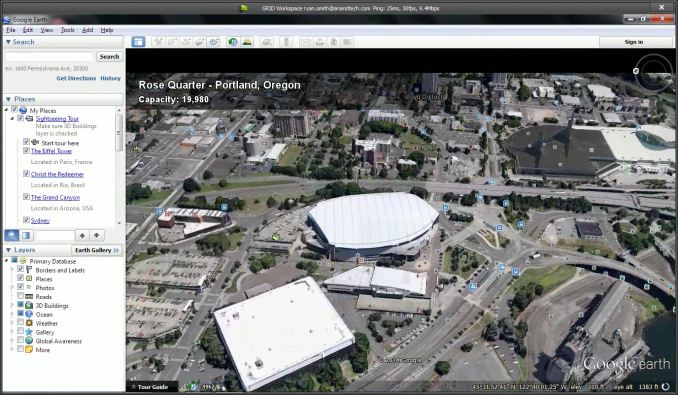 The GRID Test Drive uses a customized version of NVIDIA’s GRID Workspace client. The client is functional but thin, providing an interface to the remote desktop and the necessary statistics – ping, framerate, and current bandwidth usage – but little else. As we mentioned earlier NVIDIA has limited these instances to 1366x768 @ 30fps for bandwidth usage, with the bitrate topping out at about 10Mbps. 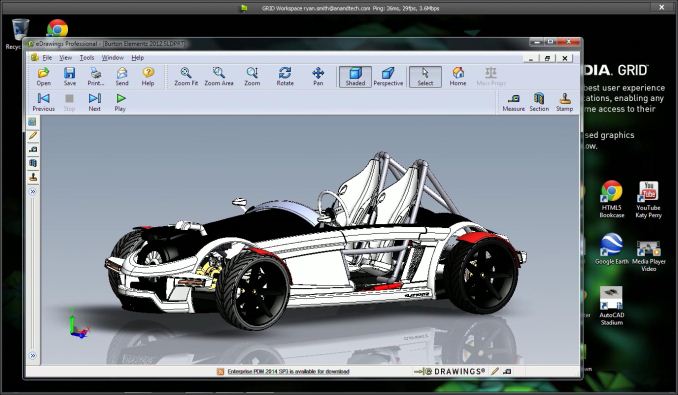 From a usability standpoint the test drive instance is fully usable, with the latency being immediately noticeable but not a significant problem for desktop usage. You’ll feel the latency in every move (especially if you’re fast at the mouse), but unlike twitch gaming it’s easy to adapt to. Everything from Word to Google Earth to AutoCAD responds as you’d expect it to, just as if it was a local instance. The biggest drawback here ends up being the 30fps framerate, which is more than workable for this demo but won’t match the smoothness of a local 60fps desktop.

Meanwhile from a quality standpoint the 10Mb bandwidth cap ends up being rather generous and generally suitable for most tasks. Despite not being designed and optimized for text and remote desktop usage and the constrained placed on quality by real time encoding, H.264 handles the task reasonably well. Text is easily legible, though users with a sharp eye are going to occasionally pick up on the lack of fidelity and lack of subpixel rendering (ClearType) around text edges.

In motion GRID rarely betrays the notion that it’s supposed to behave as if it’s local, with artifacting rarely seen in desktop applications and even in video playback. It’s not until you go with an intricate, high motion workload (such as Unigine Valley) that H.264 encoding finally can’t keep up. Otherwise even remote video playback works well, although the Inception-like H.264 video inside H.264 video is not the best use of the technology. 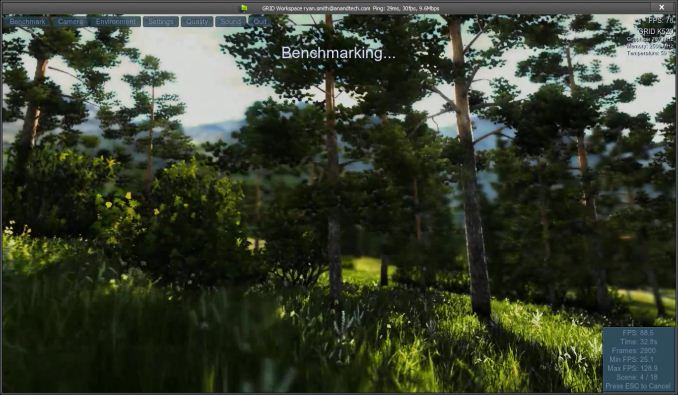 Overall performance in our experience has been very good, though admittedly NVIDIA’s instances are intended to show off GRID at its best. Bitrate limitations aside, we had no trouble maintaining 29/30fps for the stream itself, with no apparent issues with packet drops or other phenomena that would degrade stream.

For something to work so well is admittedly a bit boring from an editorial standpoint, but NVIDIA has done their homework and it shows. Without the concern of input latency that faces GRID as a gaming service, GRID as a desktop/workstation service excels at what it was designed for. Here we are using a remote server to do everything from type up parts of this article to running workstation applications, and all of it behaves as it should, behaving like a slightly laggier version of a local desktop. Which for NVIDIA’s purposes – demonstrating GPU accelerated VDI to potential customers without the need to install demonstration hardware – is exactly what NVIDIA needs.

While the GRID Test Drive is just one part of NVIDIA’s GRID marketing efforts, for the company it stands to be a big part. NVIDIA still has their work cut out for them on selling customers on the need for GPUs – a challenge that will likely never really go away – but they are increasingly in a good position to grab a piece of the pie that is the VDI market. An easily accessible demo makes their job just that much easier, and it makes it that much easier for potential customers to quickly evaluate GRID-powered VDI and how close it can currently come to offering a native desktop experience.

Long term of course NVIDIA’s plans are even grander, but that will come with software improvements. The feather in NVIDIA’s cap is VMWare’s forthcoming support for virtual GPUs (vGPUs) on GRID, which will allow greater consolidation by enabling GPU time sharing. This level of consolidation makes a clear tradeoff between performance and hardware costs, but it will be a big part of NVIDIA’s strategy in grabbing the large chunk of the market that needs GPU acceleration without needing a dedicated GPU (as the GRID Test Drive uses). To that end VMWare’s vGPU-enabled software won’t be shipping until 2015, but as of now NVIDIA tells us that the technical preview should be available late this year. 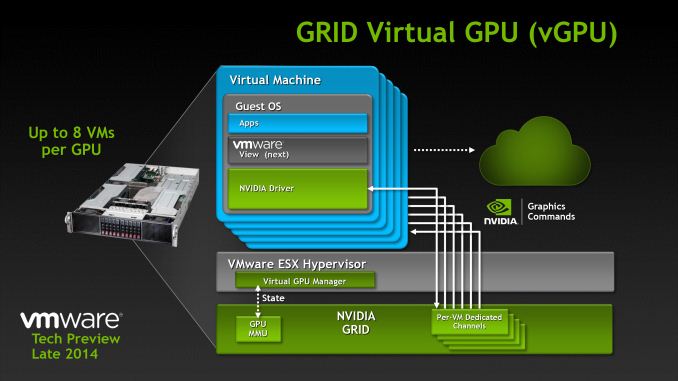