ART was designed in mind with modularity of the various target architectures in which it is supposed to run on. As such, it provides a multitude of compiler-backends targeting today’s most common architectures such as ARM, x86 and MIPS. In addition, 64-bit support for ARM64, x86-64 and while still not implemented, also MIPS64.

While we have gone more in depth of the advantages and implications of switching over to 64-bit architectures in the iPhone 5s review, the main points to take away are the availability of an increased address space, generally increased performance, and vastly increased cryptographic capabilities and performance, all while maintaining full 32-bit compatibility with all existing apps.

An important difference that Google is applying over Apple, at least inside VM runtime applications, is that they are using reference compression to avoid the usual memory bloat that comes with the switch to 64-bit. The VM retains simple 32-bit references. 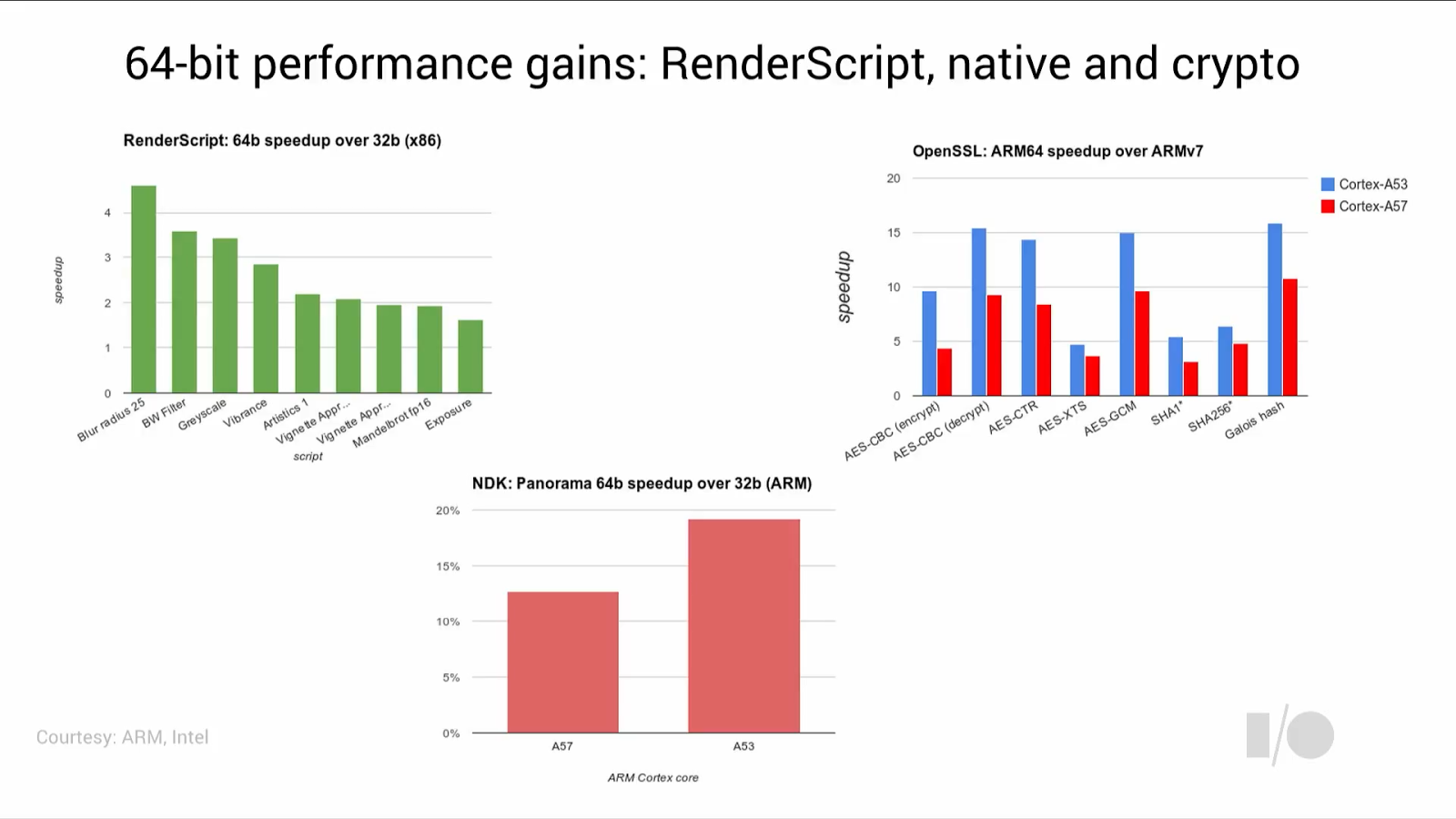 Google has made available some preview benchmarks showcasing the performance gains both on x86 and ARM platforms. The x86 benchmarks were executed on a Intel BayTrail system, and show a 2x to 4.5x speedup in various RenderScript benchmarks. On the ARM side, the crypto performance gains over 32-bit were showcased on an A57/A53 system. Both of these are relatively non-representative of one should really expect in real-world use-cases so they’re not that useful as a performance prediction.

However Google also made some interesting numbers available on one of their internal build-systems called Panorama. Here we can see a 13 to 19% increase in performance by simply switching over the ABI. It is also good to see how ARM’s Cortex A53 is able to make a bigger impact on performance when in AArch64 mode than the A57 cores.

Google claims that 85% of all current Play Store apps are immediately ready to switch over to 64 bit - which would mean that only 15% of applications have some kind of native code that needs targeted recompiling by the developer to make use of 64-bit architectures. This is a great win for Google and I expect the shift over to 64-bit to be very fast once silicon vendors start shipping 64-bit SoCs in the coming year.

In many points, Google has delivered its “Performance boosting thing” and addressed much of the shortcomings that have plagued Android for years.

ART patches up many of the Achilles’ heels that comes with running non-native applications and having an automatic memory management system. As a developer, I couldn’t have asked for more, and most performance issues that I needed to work around with clever programming no longer pose such a drastic problem anymore.

This also means that Android is finally able to compete with iOS in terms of application fluidity and performance, a big win for the consumer.