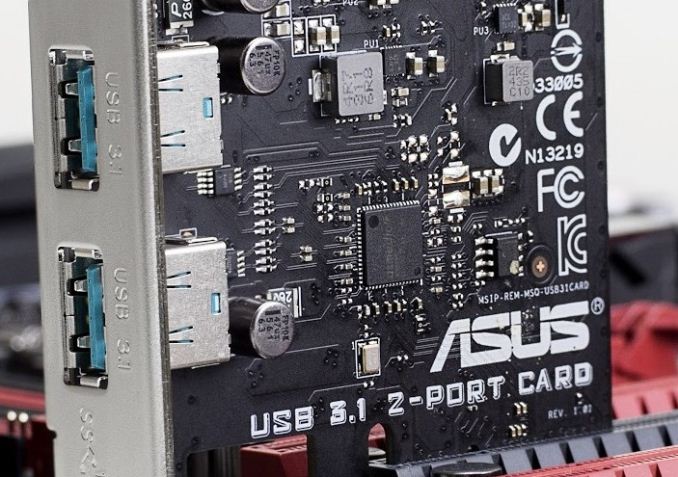 As the motherboard reviewer at AnandTech, I speak to my contacts at the motherboard manufacturers on a regular basis. All the recent talk has had a heavy sprinkling about thoughts, opinions and implementations of USB 3.1. To add to our recent testing, ASUS is today announcing the launch of their USB 3.1 PCIe card along with a variety of motherboard bundles either featuring onboard USB 3.1 or a bundled USB 3.1 card. We stuck the card in the Rampage V Extreme to run the numbers with an ASUS dual mSATA USB 3.1 enclosure.

The ASUS Plan Of Attack

As we expressed in our previous piece, USB 3.1 adoption will take an excruciating long time, especially as USB 3.0 is only now reaching price party with USB 2.0. But as with USB 3.0 we will first start to see USB 3.1 adopted on PCIe cards and extra controllers first on desktops followed by high end laptops before it becomes part of the chipset standard. Even then, with a ubiquity of ports available, it takes time for the devices to appear in the market with sufficient quantity to become cost effective for all but the early adopters.

Nevertheless, motherboard manufacturers want to tackle this head on. As far as we can tell there are a handful of IC manufactures that can provide controllers to be placed in products, but ASMedia are more ready than others to actually sell the components. ASUS' close relationship with ASMedia allows them to approach the market in two different ways - either by an onboard controller or via a bundled PCIe card.

At this point in time, all the implementations from ASUS will be via the Type-A interface. A couple of high end motherboards will be offered with USB 3.1 PCIe cards, while those lower down the stack will be modified for the onboard controller for about a dozen in total. There will be a USB Type-C card released at a later date, available only as a separate purchase.

One tack that ASUS is implemented differently is the color of the USB 3.1 Type-A ports. Standard procedure for USB 2.0 is a black port, with USB 3.0 as blue. This is not a hard and fast rule, as we see red ports on some motherboards for gaming or green ports on the Razer Blade, but as if yet there is no clear definition for USB 3.1. In this instance, ASUS is going with a teal blue to represent USB 3.1, and offers enough contrast from USB 3.0. 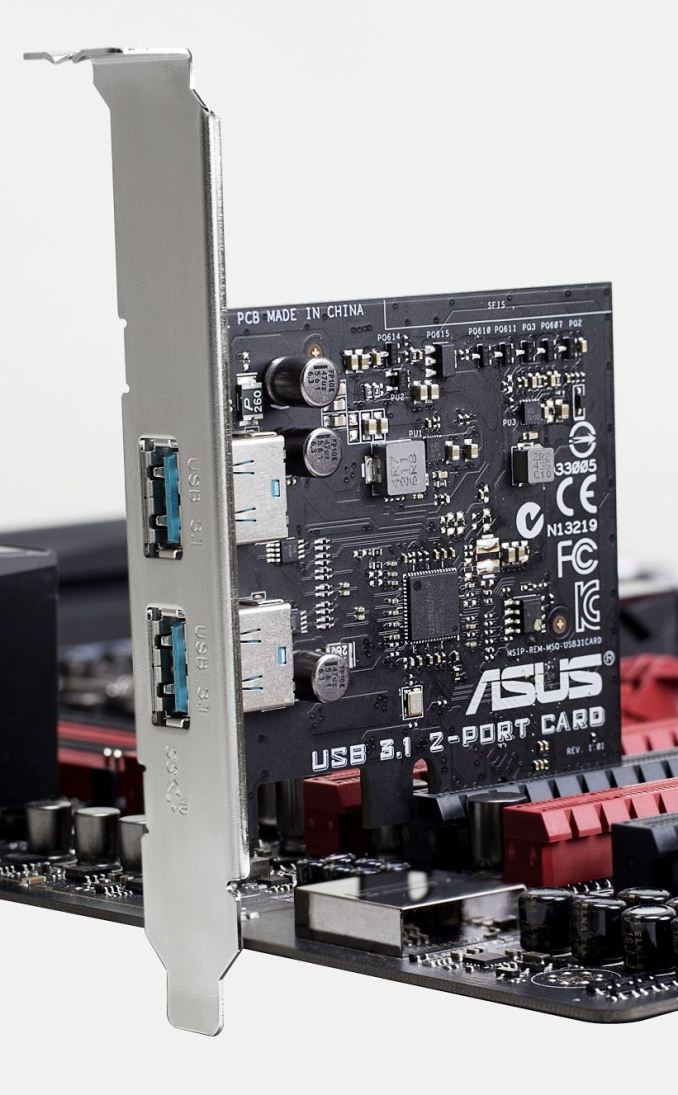 The card itself uses the ASMedia ASM1142 controller in a PCIe 2.0 x2 form factor. This should provide the 10 Gbps data rate for the USB 3.1 standard. The Type-A versions will support 900 mA charging at 5V, whereas Type-C will do 3A at 5V, suitable for 15W. In order to get the 100W charging and implement the enhanced power standard, the power delivery delivery has to be built into the power module around the USB 3.1 controller. With PCIe cards this makes more sense, although it would require the card to have an extra power connector (either SATA, molex or PCIe). When the USB 3.1 port is on the rear panel of a motherboard, it makes it more difficult to apply the approach power planes, especially on cheaper motherboards, as well as drawing power directly from the 24-pin ATX and directing the appropriate power around the processor. Thus if we ever see 100W charging on motherboards, PCIe cards might be the way forward. 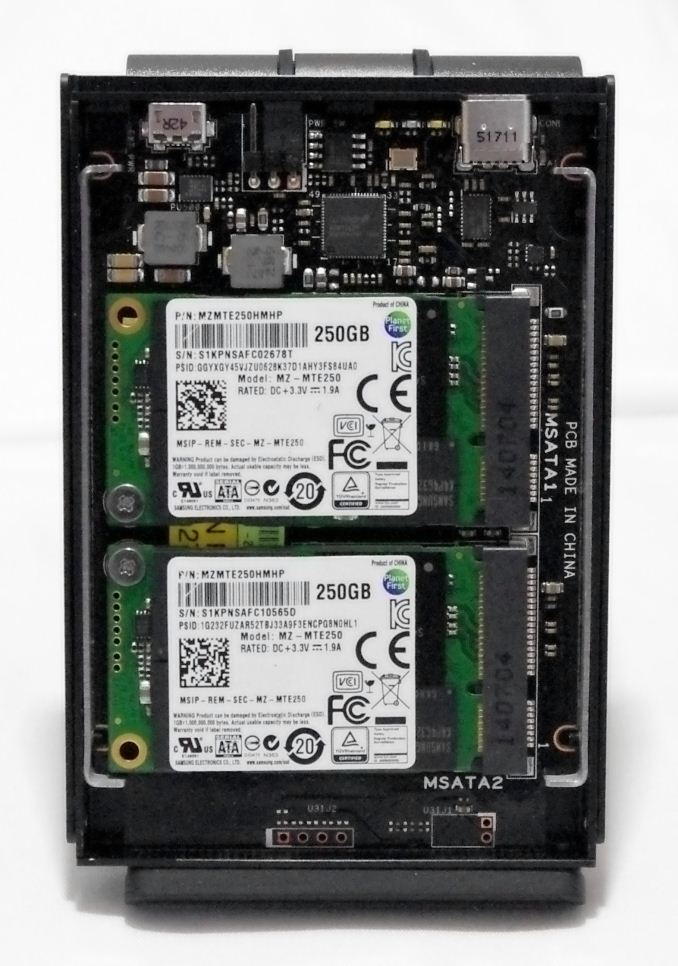 In order to keep the size of the device down, it uses a Type-C connector for data along with a micro-USB for power. This means that the device requires two USB ports in all, which is understandable for a dual mSATA device that requires power but perhaps somewhat limiting for devices with only one USB port. It is unknown if ASUS will sell this enclosure separately at this point.

Both the card and the enclosure are still in development, and we had a difficult time to get it to work. For example, with the Rampage V Extreme and the USB 3.1 card, the enclosure had to be plugged in at power up, with power and data both connected to the card. Without this, the system would not recognize the device or it would enter a speed mode indicative of PCIe 2.0 x1 data transfers eventually ending up in an IO error. Also, our setup did not want to work in USB 2.0 mode at all. But when we installed the right drivers, and booted the system with the cables set up as required, we got great performance. There was a little coil whine during system writes, but as mentioned this device is still in development, and hopefully all these issues can be ironed out. 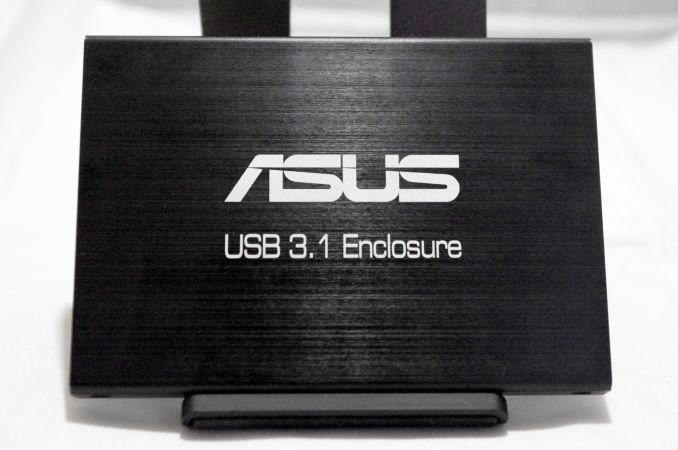 Unfortunately all the hardware for our previous USB 3.1 testing had to be sent back which means we cannot do a direct comparison due to different enclosures, but it is still interesting to see where the numbers land. ASUS is also touting an updated USB 3.0 Boost as well, dubbed USB 3.1 Boost, to help with transfers. The current state of play with USB transfer speeds is a miasma from XP drivers, base Intel drivers for Windows 7 and then UASP implementations in Windows 8.  The basic mode in Windows 7 means that Bulk Only Transfer (BOT) is par for the course: 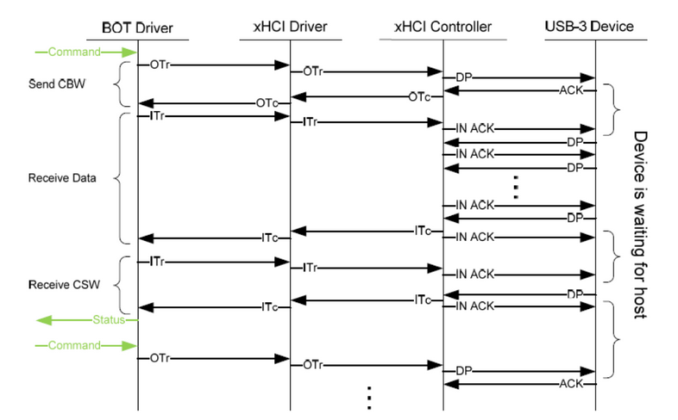 UASP, or USB Attached SCSI Protocol, allows transfers to occur by multitasking the transfers without the need for constant iterations up and down the stack for each read or write command. 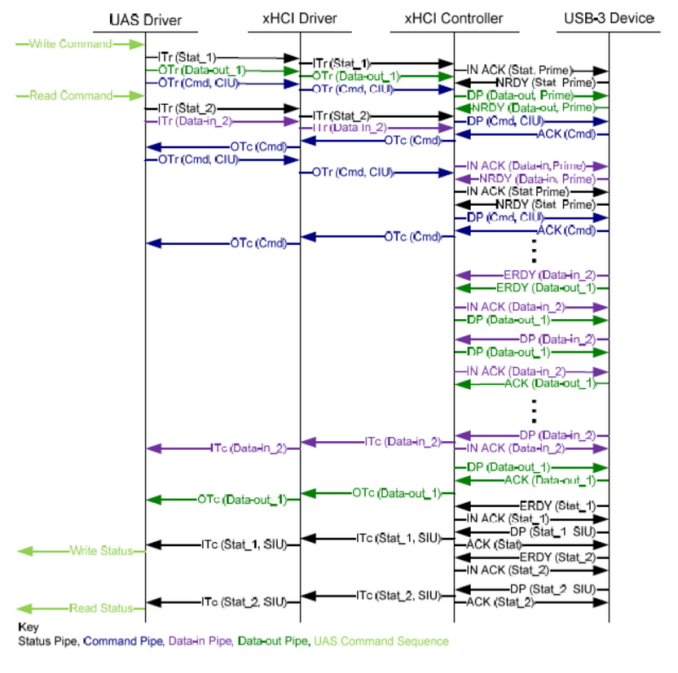 Windows 8 offers a good version of UASP, however ASUS’ customized driver for Intel and ASMedia based ports goes one better through optimization. Normally such processes sacrifice latency for peak speeds, although we are rarely latency limited with a USB drive. Windows 7 also gets a similar driver, which represents a bigger boost from the base driver there.

For the setup, we tested the USB 3.1 enclosure in the USB 3.1 Type-A card installed into a red slot on the Rampage V Extreme (a CPU PEG slot), the Intel PCH based USB 3.0 ports and the ASMedia controller based USB 3.0 ports. In each of these scenarios, USB 3.1 Boost is applied for a second set of data. Due to our initial issues (our first USB 3.1 card was DOA), ASUS sent a spare set of hardware and another enclosure – we can confirm that the second enclosure exhibited the same speeds, confirming a level of consistency.

Due to some issues getting IOmeter to recognize the drives without a partition, the IOmeter results for peak throughput seem low compared to the AS-SSD and CrystalDiskMark testing. But on the other hand, we easily show a ~50% boost in random write speeds, as moving from 84 MBps to 125 MBps (Intel 3.0 -> ASMedia 3.1) marks a significant shift. Our copy test shows a similar gain, even more so when USB 3.1 Boost is factored in.

As of the official announcement in the US today, a number of SKUs will be available for users to purchase (as long as you don’t mind waiting for USB 3.1 devices to come along). These motherboards will be split into two sections:

The USB 3.1 card, with the appropriate driver update, will be $39 and have an ETA of 3/10. Both cards should be compatible in the following motherboards:

Technically ASUS would prefer that these cards are used solely for use in ASUS motherboards and are being validated as such. A full validation list should be available on the product page for the USB 3.1 cards when it becomes available. Performance on any other motherboard is not guaranteed, but we wouldn’t say it was impossible. The official specifications are: 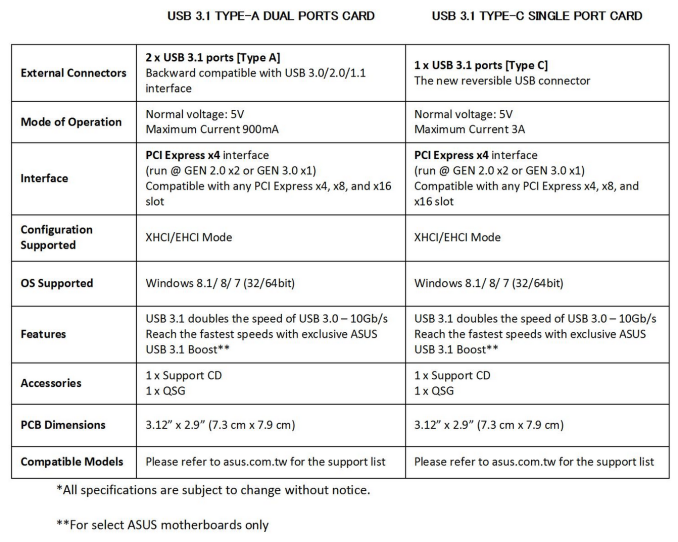 Most manufacturers will go all in with Type-A to begin with, as Type-C is still new to the market. Type-A can still be used with current devices and drives, whereas Type-C cables are still new. Given that the controller requires two PCIe 2.0 lanes, it makes interesting reading as to how freely USB 3.1 might be implemented on Intel’s next desktop platform. USB 3.1 will also be a differentiator in the laptop and notebook space, and I suspect several companies will market the functionality and charge for the privilege, despite the lack of enclosures right now. The fact that ASUS is going to sell its USB 3.1 card for $39 means that implementation costs should be low for notebook manufacturers.

As part of this release, ASUS also sent us a list of USB 3.1 devices that they plan of validating with the USB 3.1 ports. Most of the company names come from Asia and might represent a few of the ODMs that the more consumer-oriented brands use, but the list totals 34 items (Hubs, enclosures, cables) with availability for a few of them from March. I suspect that Computex time (June) will be ramping up the USB 3.1 ecosystem for the early adopters for sure.