We've been looking at performance consistency since the Intel SSD DC S3700 review in late 2012 and it has become one of the cornerstones of our SSD reviews. Back in the days many SSD vendors were only focusing on high peak performance, which unfortunately came at the cost of sustained performance. In other words, the drives would push high IOPS in certain synthetic scenarios to provide nice marketing numbers, but as soon as you pushed the drive for more than a few minutes you could easily run into hiccups caused by poor performance consistency.

Once we started exploring IO consistency, nearly all SSD manufacturers made a move to improve consistency and for the 2015 suite, I haven't made any significant changes to the methodology we use to test IO consistency. The biggest change is the move from VDBench to Iometer 1.1.0 as the benchmarking software and I've also extended the test from 2000 seconds to a full hour to ensure that all drives hit steady-state during the test.

For better readability, I now provide bar graphs with the first one being an average IOPS of the last 400 seconds and the second graph displaying the IOPS divided by standard deviation during the same period. Average IOPS provides a quick look into overall performance, but it can easily hide bad consistency, so looking at standard deviation is necessary for a complete look into consistency.

I'm still providing the same scatter graphs too, of course. However, I decided to dump the logarithmic graphs and go linear-only since logarithmic graphs aren't as accurate and can be hard to interpret for those who aren't familiar with them. I provide two graphs: one that includes the whole duration of the test and another that focuses on the last 400 seconds of the test to get a better scope into steady-state performance. 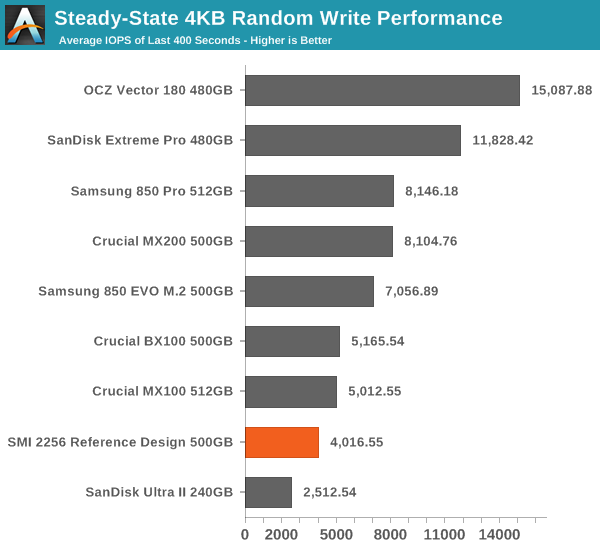 The SMI 2256 manages to pull off decent average IOPS under a sustained random IO workload. It can't challenge the 850 EVO that uses faster 3D V-NAND, but compared to the BX100 with SM2246EN and 16nm MLC the drop in performance isn't massive -- better yet the SMI 2256 is quite a bit faster than SanDisk's TLC drive Ultra II. 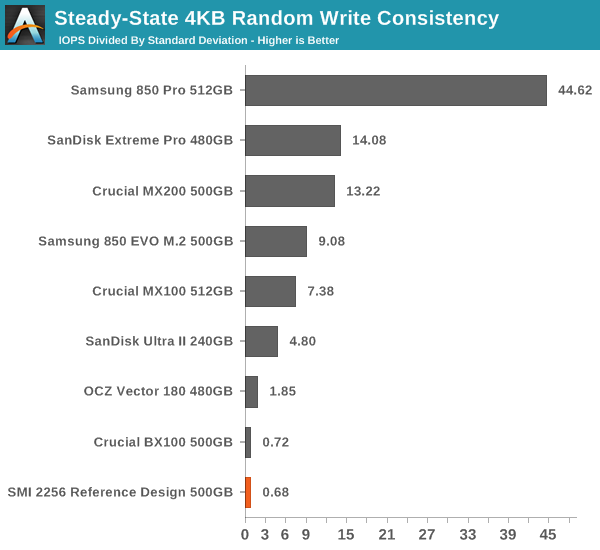 Unfortunately, the performance isn't very consistent, though, but then again the SM2246EN isn't either as the BX100 is only marginally better.

The steady-state behavior of the SM2256 appears to be similar to its predecessor SM2246EN. The baseline performance is fairly low at roughly 2,000 IOPS, but bursts occur frequently and go all the way to up to 25K IOPS, although this only lasts for about a second.