It is no secret that Intel's 10th generation processors are power-hungry. Intel has been squeezing every last drop of MHz out of the 14 nm process with its fastest desktop processors yet, but sometimes conventional air cooling just won't suffice for those wanting to push the limits even further. ASRock understands this, and building on the success of the elegant (yet wallet-emptying) AMD Aqua, the company unveiled an Intel version. The Z490 Aqua comes equipped as a premium feature motherboard. The large integrated monoblock which cools both the CPU and the board's power delivery, amd it now features a very cool OLED display. There is also integrated Thunderbolt 3, 10 gigabit Ethernet, as well as its large 16-phase power delivery. 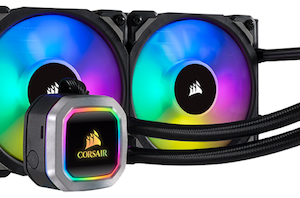