There have been teasers, press conferences, architectural announcements, and pricing games all around – and all before the first card has even shipped. The run-up to the launch of AMD’s new Radeon RX 5700 series of video cards has been a dynamic and memorable time, and a very fitting outcome for a family of cards named after AMD’s legendary Radeon HD 5700 series. However, at some point all the showmanship must come to an end and the cards will fall where they may: launch day is upon us for AMD’s Radeon RX 5700 series and RDNA GPU architecture. Does AMD have what it takes to claim the midrange market for themselves? Let's find out! 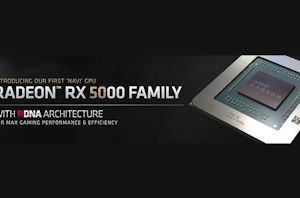 While the bulk of this morning’s AMD Computex keynote has been on AMD’s 3rd generation Ryzen CPUs and their underlying Zen 2 architecture, the company also took a moment...