During the opening WWDC 2013 keynote, Apple announced a refresh of its AirPort Extreme and Time Capsule with support for 802.11ac. The two include 3x3:3 802.11ac with support for a PHY rate of up to 1300 Mbps and of course simultaneous 3x3:3 802.11n on 2.4 GHz (ac applies to 5 GHz only of course). From the outside, the new AirPort Extreme and Time Capsule look like a taller version of the AirPort Express which was released in 2012. The reason of course is to accommodate the 6 antennas inside, 3 for 2.4 GHz and 3 for 5 GHz for optimal orthogonality for 802.11ac's new beamforming. It's unclear at this point what chipset is inside the new hardware, but from the feature support and I/O... 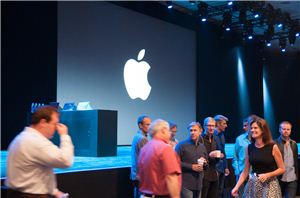 Brian and I are live at Moscone West in San Francisco for Apple's WWDC 2013 Keynote. The keynote starts at 10AM PT/1PM ET. Check back here for our Live Blog!