The gamepad controller is obviously the game-changer here, since it really does redefine portable gaming usage models. That sounds like marketing hyperbole at first, but it’s actually true – you can take the Edge around with the gamepad and play real PC games on it basically anywhere, as though it’s a huge PSP or some crazy Ben Heck experiment to weld the two halves of an Xbox controller to a tablet. It’s simply awesome, there’s absolutely no question in my mind about that.

The gamepad controller is like a case that the Edge docks into, with a springloaded clip with the dock connector and two pins on either side to hold it in place. The inner surface of the gamepad features two rubber pads with springs behind them to pop the tablet up out of the case when the clip is released. Inserting and removing the tablet from the gamepad is a two-hand job, as both sides of the bottom clip need to be released before the tablet pops up. 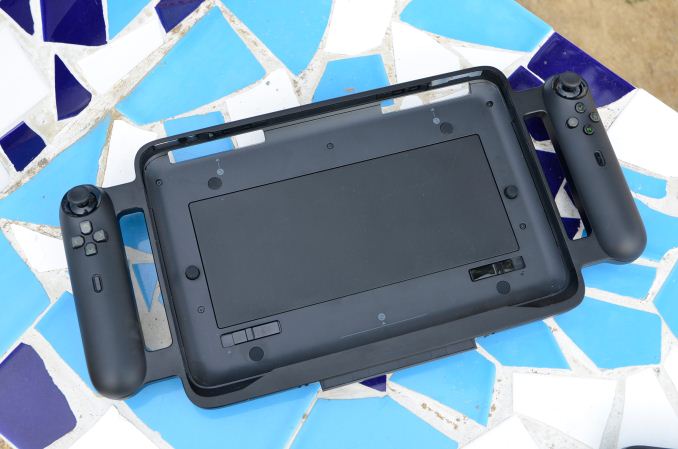 The frame is made of anodized aluminum, with the controls and backplate being matte black plastic that looks very similar to the aluminum in terms of aesthetic. Everything attaches to the aluminum skeleton though, so the entire piece feels very solid in your hands. It actually reminds me a bit of the controller cases for iPhone that turned it into something resembling a high-tech Gameboy. The frame has contours on the inner bottom edge, redirecting output from the downward-firing speakers out towards the user.

With the extended 41.44Wh battery, the full kit weighs about 3.25 pounds. Ergonomically, this is a two-handed device – there’s too much weight and holding just one handle won’t work due to the rotational moment of inertia. Basically, it just wants to rotate around the axis of the handle unless you’re holding both of them. The weight means that the easiest way to game is to place the back of the tablet on your lap and just crane over it to play. It just isn’t feasible to hold upright for any sustained period of time without resting it against something. The IPS panel helps with the viewing angles, so thankfully that isn’t an issue. The nice thing about the gamepad controller is that it does shield the worst of the heat – the top right corner of the gamepad does get pretty toasty when gaming or benchmarking for a length of time, but it’s not as bad as touching the tablet directly. 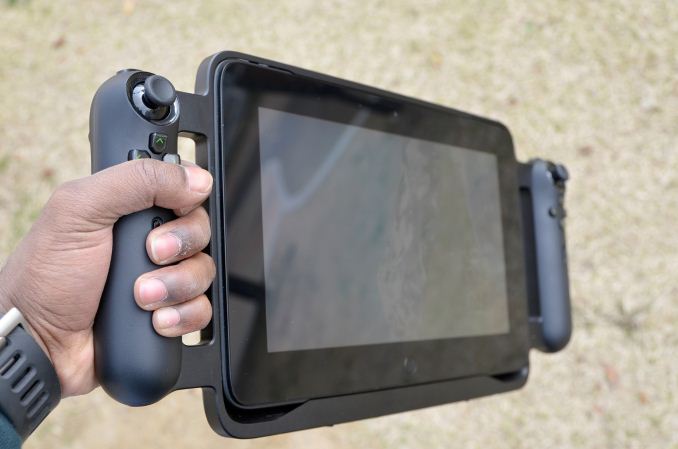 The controller has two analog sticks prominently featured at the top of each side, directional buttons on and a back button on the left side, the four action buttons (A, B, X, Y) and start button on the right side, two sets of right and left shoulder/bumper buttons, and two analog triggers. It has basically the same controller layout as the Xbox 360, with one key difference – the right analog stick is placed above the action buttons instead of below. This is a little annoying, because the natural instinct is to put your thumb on the analog instead of the action buttons where they would normally be. If you don’t adjust the position of your hand on the right side, this can result in discomfort during extended gaming sessions (yes, I know this from experience.) 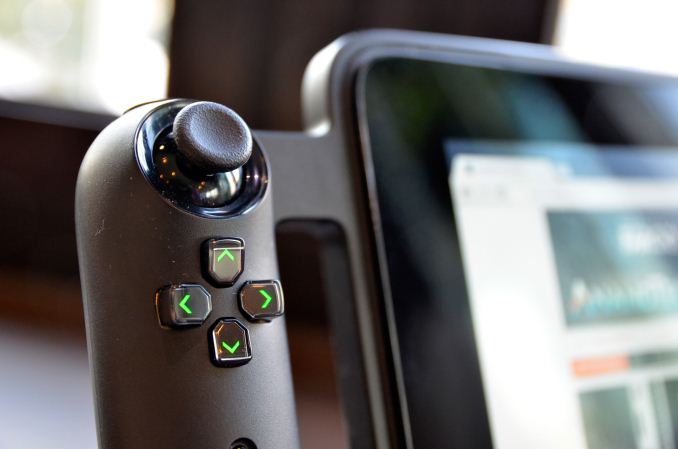 The system recognizes the gamepad as an Xbox 360 controller, so there are no questions about compatibility or setup. It just works. You can even install JoyToKey to emulate a mouse using the analog sticks, though I wish Razer had included a first-party way to do this. When properly set up, it’s pretty interesting to use the gamepad for standard Windows input. 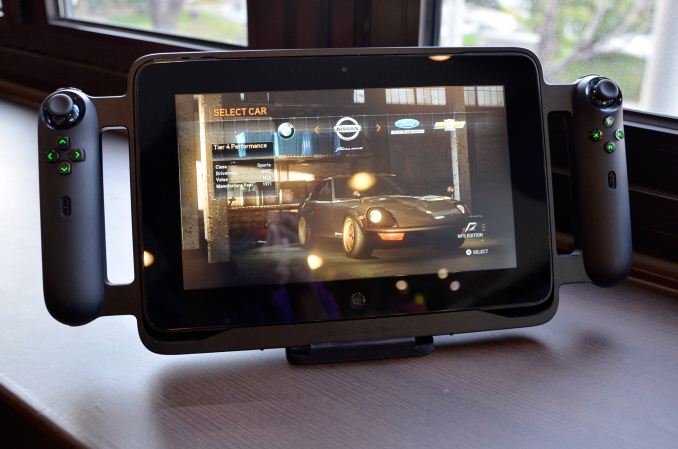 In general, the Edge’s gamepad controller shockingly simple to use and easy to get used to, the adjustment isn’t nearly as much as one would think considering that your Xbox controller has suddenly mutated and grown a 10.1” display. You start playing games everywhere – buses, cars, planes, coffee shops, subways, libraries, basically anywhere you can pull out a tablet. Early on in the review process, I was driving to dinner with a friend of mine who was playing Half-Life 2 on the Edge in the passenger seat. It was incredibly distracting, mostly because I really wanted to play too. (A small piece of advice: don’t drive and play Need For Speed during stoplights, regardless of how tempting it might be to do so.) But it’s awesome – places where it would be awkward or impossible to play PC games are no longer so, you can just take the Edge and play Skyrim or Dirt 3 as easily as one would play Angry Birds on an iPad. Bam, mobile PC gaming, redefined.