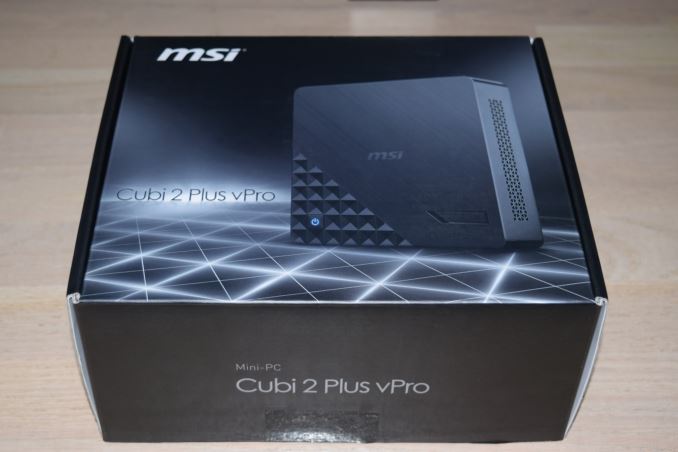 MSI entered the UCFF PC market with a set of models under the Cubi brand. They were based on Broadwell processors. Earlier this year, they launched the Cubi 2 Plus mini-PCs with a slightly larger form factor. Unlike the soldered processors in the Cubi-mini PC kits, the Cubi 2 Plus models come with a LGA 1151 socket and are capable of supporting Skylake CPUs with TDPs of up to 35W (-T series).

MSI initially wanted to sample the Cubi 2 Plus vPro, but, due to some logistics issues, we ended up with a regular Cubi 2 Plus unit. I went ahead and completed our standard mini-PC evaluation routine. After I sent some feedback and questions, MSI realized that we didn't have the vPro unit in hand, and arranged for a vPro unit to replace the regular version. The first sample had a Samsung SM951 128GB NVMe card and a 8GB DDR4 SO-DIMM (SK Hynix HMA41GS6AFR8N-TF) pre-installed. The vPro one came with a HGST HTS725050A7E630 (500 GB, 7200 RPM, SATA-III) hard drive and a single 4GB DDR4 SO-DIMM (SK Hynix HMA451S6AFR8N-TF). Both configurations had Windows 10 Home pre-installed. The regular Cubi 2 Plus was processed with its original hardware configuration, but, the OS was upgraded to Windows 10 Pro x64. For the vPro model, we completely reconfigured the unit. There was no point in handicapping it with single-channel memory and a hard drive for primary storage. Therefore, we installed a Mushkin Atlas Vital 250GB M.2 SATA SSD and a 2x8GB Patriot Memory DDR4 SO-DIMM kit. 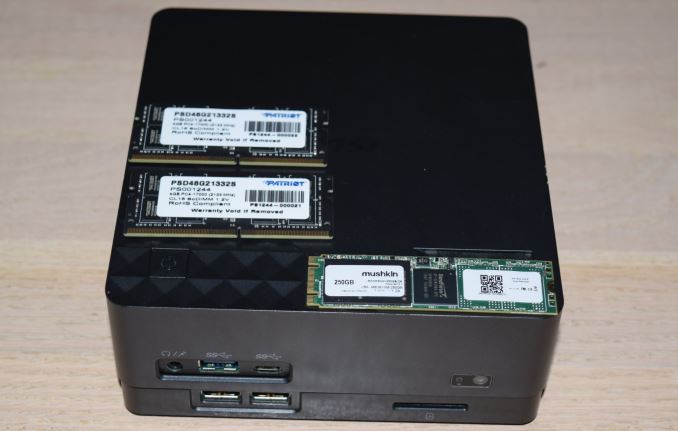 In addition to the main unit pictured above, the Cubi 2 Plus packages contain a 90W (19V @ 4.74A) power adapter, a VESA mount with appropriate screws, a user guide and a special cable to provide SATA connectivity if the end-user opts to install a 2.5" drive in the system. The vPro sample already had this cable pre-installed along with the hard drive. 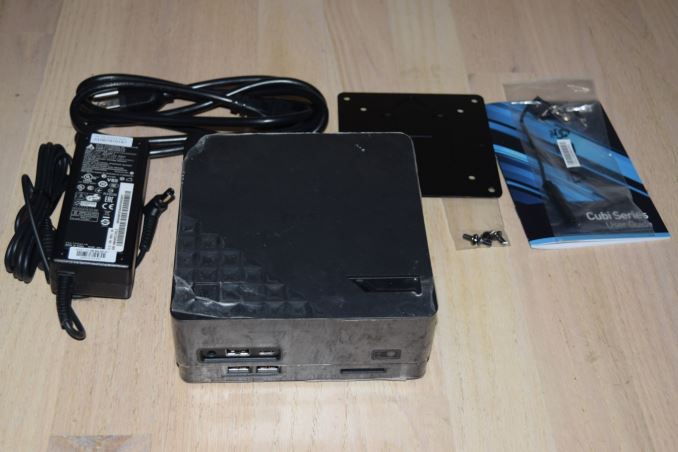 The galleries below takes us around the packaging and chassis design of the two models. Important aspects to note include the completely revamped I/O in the lower part of the chassis. While the regular model has 2x USB 2.0 ports and a SD card reader in the front, the vPro model adds a serial port, a HDMI port and another USB 2.0 port in the rear. The rest of the I/Os are summarized in the table that follows the galleries.

The internal layout of the components in both the models is similar. The gallery below presents a limited teardown of the regular model.

The specifications of the review configurations of both models are summarized in the table below. While the regular model is configured as a powerful mini-PC for home users, the vPro model targets business use-cases.

We installed Windows 10 Pro x64 on both models. Drivers were downloaded from the product page and the setup process was uneventful. On the BIOS front, the features in the H110-based regular model were quite basic. It didn't even have a list of storage devices (SATA or M.2) attached to the system, and it also didn't report the amount of RAM installed. On the other hand, the Q170-based vPro model had a much more useful BIOS. In addition to the DRAM and storage device information, there is also support for Intel AMT (Active Management Technology) BIOS extensions. Secure boot options are available in both BIOS versions.

In the table below, we have an overview of the various systems that we are comparing the Cubi 2 Plus models against. Note that they may not belong to the same market segment. The relevant configuration details of the machines are provided so that readers have an understanding of why some benchmark numbers are skewed for or against the Cubi 2 Plus when we come to those sections.