There have been a lot of exciting advances in LCD technology in the last year.  We have seen LCD's decrease in size, power consumption, and most importantly, price.  When ViewSonic told us they had a sub-600USD 18" LCD for us, they definitely got our attention.  Unfortunately, many people are saying it is too little, too late.

ViewSonic has always been an interesting company to deal with because in their variety of products.  No other company in the LCD sector has been as criticized and as praised as ViewSonic.  When it comes to hit or miss, they are the elite.  For the most part, ViewSonic has done a good deal of blending quality with price, giving the end user an easy balance of both.  Furthermore, ViewSonic ranks the largest in LCD/CRT sales in the US, but the industry giant Samsung dwarfs ViewSonic several times over.

ViewSonic has had almost no problems gaining acceptance in the CRT world, but they still are having troubles breaking into the world of LCD monitors.

Enough about politics and marketing.  In the computer industry, even one maverick product alone is enough to spur competition and new product definitions.  However, is the VG800 the answer to High Performance Value LCD's?  Find out as we take a look at ViewSonic's newest line! 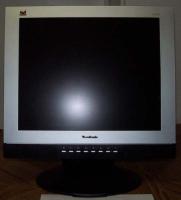