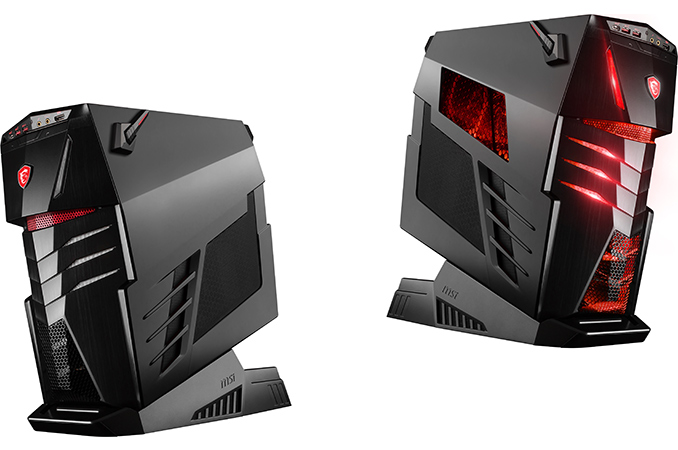 MSI this month upgraded its whole lineup of gaming desktops with 7th generation Intel Core Kaby Lake processors as well as newer motherboards featuring Intel’s 200-series chipsets. The new Aegis and Nightblade systems have the same design and capabilities as their predecessors, but they now offer higher performance because of the CPUs and a better feature set because of the new chipset (PCH).

MSI’s Aegis and Nightblade computers are different in terms of positioning, but they have a lot of similarities when it comes to architecture. Firstly, the PCs use dual-chamber designs to ensure better cooling of their CPU and GPU, and they both simplify upgrades to a certain degree. Secondly, all the systems are based on Mini-ITX motherboards to minimize their footprint and make that dual-chamber design possible in case of miniature Nightblade PCs. Thirdly, gaming computers from MSI come with numerous configurable RGB LEDs to give their owners ability to customize their design according to their taste using MSI’s Mystic Light or Gaming Center software. Finally, all the latest MSI gaming PCs (except the Nightblade MIB) feature front HDMI ports to connect VR headsets.

The Nightblade series from MSI is designed to be as miniature as possible using off-the-shelf components: we are talking about 10-16 liter boxes here with up to 500 W PSUs. Given the relatively small sizes, the new Nightblade PCs use Intel B250-based motherboards, do not support CPU overclocking and can fit in up to three storage devices (in addition to one or two PCIe NVMe SSDs) - being a mix of 2.5-inch and 3.5-inch combinations. When it comes to graphics performance, we are still talking about very high-performance machines with either GeForce GTX 1060 or 1070 GPUs that can be overclocked if needed and there is enough cooling and power headroom.

The Aegis family  of desktops from MSI consists of the Aegis 3, X3 and Ti 3. These systems are aimed at gamers seeking for higher performance and expandability, which is why two out of three models (the Aegis Ti3 and the Aegis X3) are based on the Intel Z270 PCH, support manual and automatic CPU overclocking (they have a special MSI Game Boost button on their sides to activate the feature), come with 850 W or 600 W PSUs and the company’s Silent Storm cooling system. The Aegis PCs feature a triple-chamber design with the third chamber housing their PSUs. 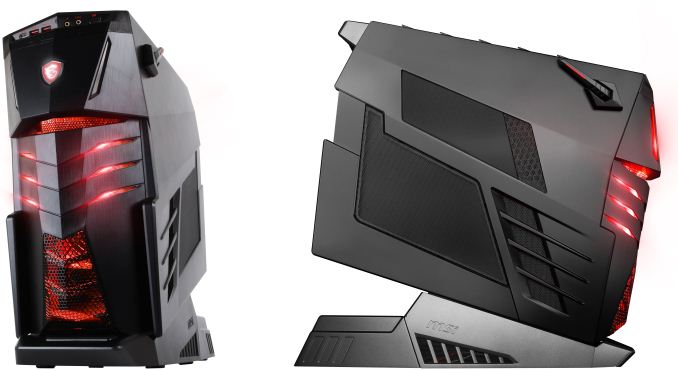 All three Aegis PCs can accommodate up to three SSDs/HDDs in combination, in addition to two or three M.2 SSDs (which can work in RAID) as well as feature Rivet Networks wired or wireless Killer network controllers that can prioritize gaming traffic over traffic generated by other apps. MSI’s Aegis computers use NVIDIA’s GeForce GTX 10 graphics cards, but the top-of-the-range Aegis Ti3 can actually accommodate up to two GeForce GTX 1070/1080 boards in SLI (making it the world’s only Mini-ITX PC with two GPUs) and up to 64 GB of DDR4-2400 memory. 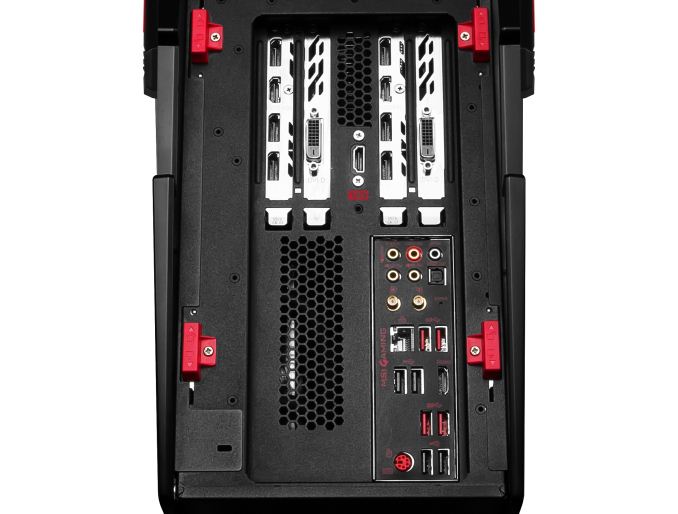 It is interesting to note that instead of using a larger (say, microATX) motherboard with two PCIe 3.0 slots, in the case of the Aegis Ti3 MSI decided to use a Mini-ITX mainboard and then use a riser card with a PCIe switch to bifurcate the only PCIe 3.0 x16 slot between two cards.

The Aegis Ti3 is a pretty large system that uses a 39-liter chassis. Given its configuration (two graphics cards, two SSDs with 1 TB capacity, 3 TB HDD, etc.), it can rival some of the systems made by boutique PC makers.

MSI’s Aegis and Nightblade PCs come with pre-installed microprocessors, video cards, storage and memory components, but actual configurations may vary in different regions. Therefore prices of the systems are going to vary greatly depending on the actual setup and components.