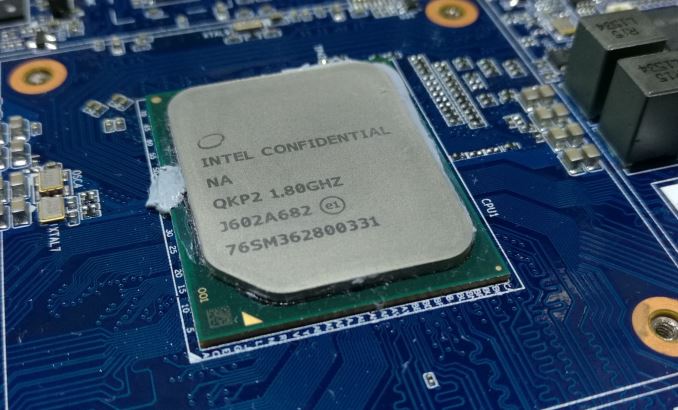 Intel’s Atom C3000 processors are based on Intel's current-generation Goldmont Atom microarchitecture, with SKUs offering between 2 and 16 cores and clockspeeds up to 2.2 GHz. Being designed for primarily for NAS and servers, the Atom C3000 SoCs fully support Intel’s VT-d hardware virtualization, Quick Assist compression/encryption technology (up to 20 Gbps throughput) as well as up to 64 GB of single-channel DDR4-1866 or DDR3L-1600 ECC memory. When it comes to I/O, the Atom C3000 features a PCIe 3.0 x16 controller (with x2, x4 and x8 bifurcation), 16 SATA 3.0 ports, four 10 GbE controllers, and four USB 3.0 ports.

Due to its rich I/O capabilities, the Atom C3000 is aimed at a wide range of devices, including servers/NAS (which they were originally designed for) as well as emerging applications like IoT and autonomous vehicles. For example, PCIe 3.0 bus may be used to connect various controllers, sensors and co-processors (e.g., a GPU) to the SoC. Last year we examined one of the server-oriented C3000-based designs that is going to be one of the many devices featuring the new chips.

Intel will offer various versions of its Atom C3000 SoCs with different TDPs starting at 8.5 W. The chips will support extended temperature ranges for storage, industrial and autonomous driving environments. In addition, Intel says that the processors feature “automotive-grade safety and security features,” but does not elaborate (generally, ECC, Quick Assist, virtualization, etc. can be considered as safety and security features too).

Intel’s partners have been testing the Atom C3000 processors since at least early 2016. The chipmaker expects its allies to start launching actual products based on the chips by mid-2017. In addition to the SoCs themselves, Intel will also supply a data plane development kit (DPDK) as well as a storage performance development kit (SPDK) to assist its partners in development of networking and storage applications.