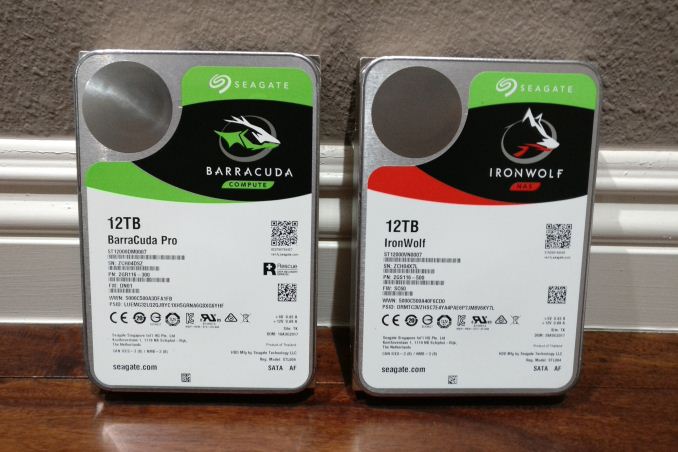 Seagate is launching a trio of 12TB hard drives today with a focus on the consumer market. The 3.5” drives build upon the 'PMR platters in a helium-filled enclosure' platform used in the 10 TB consumer hard drives released last year. The new 12TB drives target three different market segments:

From a hardware viewpoint, the three drives are similar to the Seagate Enterprise Capacity v7 drives launched in March 2017. All of them features eight PMR platters with a 923 Gb/in2 areal density in a sealed enclosure filled with helium. That said, the Barracuda Pro Compute, meant for desktop use, doesn't come with rotational vibration (RV) sensors or dual-plane motor balancing hardware. The RV sensors and the dual-plane balance / AgileArray features enable reliable performance in multi-drive enclosures. The other important differentiation aspects include firmware features, warranty / workload ratings, and value-added services like the Seagate Rescue Data Recovery.

The table below compares the characteristics of the three drives being introduced today.

HGST and Western Digital had come out with a number of helium-based drives for different applications before Seagate had even put out a single drive in that category. However, with the introduction of the Guardian series last year, Seagate wrested the initiative by targeting multiple market segments at the same time. The drives being launched today cement Seagate's position in the consumer HDD market - they have the highest-capacity drives for both desktop and NAS usage currently. Their helium production line also seems to have achieved economies of scale - the launch prices of the 12TB drives undercut the 10TB ones from last year by as much as $100 (Update: Seagate corrected the pricing information provided to us in the initial press kit after our article was posted. The cost is now much closer to the WD Gold 12TB @ $520. The WD Gold is meant to go against the Seagate Enterprise Capacity v7, and has a 550 TB/yr workload limit. This makes the pricing for the Barracuda Pro and the IronWolf Pro a bit hard to digest) The $/GB metric has come down, as the launch prices for the 12TB drives are approximately the same as what we saw for the 10TB drives last year. That is definitely good news for consumers.​