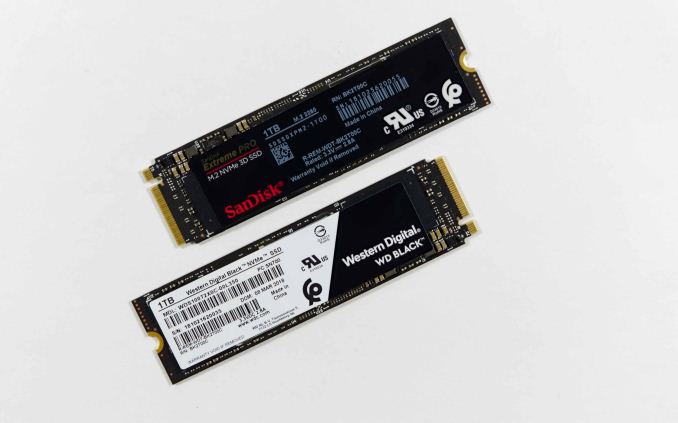 Western Digital is bringing 3D NAND to their high-end consumer SSD family with the launch today of two new NVMe SSDs featuring SanDisk's 64-layer 3D TLC NAND flash memory. As with the SATA SSDs that first brought 3D NAND to their consumer portfolio, Western Digital is releasing the same drive under both their WD and SanDisk brands. Under the stickers, the hardware is identical.

The names are recycled and familiar: the WD Black and SanDisk Extreme PRO. The first WD Black SSD was Western Digital's first consumer NVMe product. It used a Marvell controller and 15nm planar TLC NAND, and ended up near the bottom of the performance rankings for NVMe SSDs, with no appreciable performance advantage over SATA SSDs for heavier workloads. The SanDisk Extreme PRO name hasn't been used on an internal SSD for quite a while, but it carries a strong legacy: the original SanDisk Extreme PRO was a top-tier SATA SSD with MLC NAND and was competitive with the Samsung 850 PRO. The SATA SanDisk Extreme PRO hit the market right before the 850 PRO and was the first consumer SSD to carry a 10-year warranty, forcing Samsung to follow suit with the 850 PRO.

Re-using product names like this without any clear generational indicator or model year will cause confusion. Western Digital has at least ensured that the new drives are using different capacities from their predecessors: the first-generation WD Black was 256GB and 512GB, the original Extreme PRO was 240GB, 480GB and 960GB, and the new WD Black and SanDisk Extreme PRO are 250GB, 500GB and 1000GB. Still, last year's WD Black will be coexisting in the marketplace for several months with this year's model, and the two are very different products.

The new WD Black and SanDisk Extreme PRO SSDs are based on the same platform as the SN720 business/OEM SSD Western Digital announced earlier this year. In addition to the major advance of switching from 15nm planar TLC NAND to 64-layer BiCS 3D NAND, the new SSDs also feature Western Digital's own new SSD controller instead of using a controller from Marvell. This is a major shift toward vertical integration for Western Digital/SanDisk, and is the best strategy for Western Digital to differentiate their products in a market crowded with dozens of brands sourcing their controllers or the entire drive design from the same small handful of vendors.

The performance specifications of the new WD Black and SanDisk Extreme PRO promise a high-end drive, with sequential read speeds of 3+ GB/s even on the smallest 250GB model, and high random access specifications on the 500GB and larger models. Write endurance ratings are a reasonable 0.3-0.4 drive writes per day for five years. The MSRPs position the WD Black directly against the Samsung 960 EVO and above most other recent consumer NVMe SSDs—the fast-growing entry-level NVMe segment is what most brands are focusing on at the moment. 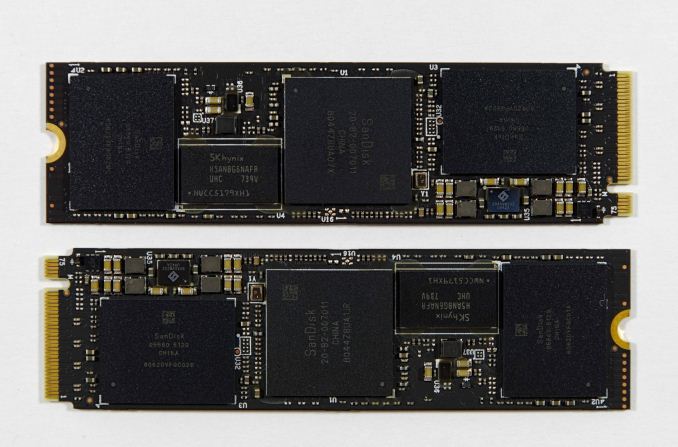 The WD Black can at least momentarily hit the power limits of the M.2 form factor, but it doesn't feature any heatspreader. Instead, Western Digital is using an uncommon layout that places the controller in the middle of the stick with NAND flash memory on both sides of the controller. This was deemed adequate to prevent overheating, and has the side effect of making it easier to route the 8 channels from the controller to the NAND.

The new drives will initially be available in capacities from 250GB to 1TB, though the SanDisk-branded versions won't include the smallest 250GB model. These drives should all be shipping by the end of the month. Western Digital has not mentioned any plans for a 2TB models, but since they have already announced a 2TB SN720 they obviously have the option to quickly deploy a 2TB WD Black or SanDisk Extreme PRO model if the demand is sufficient.