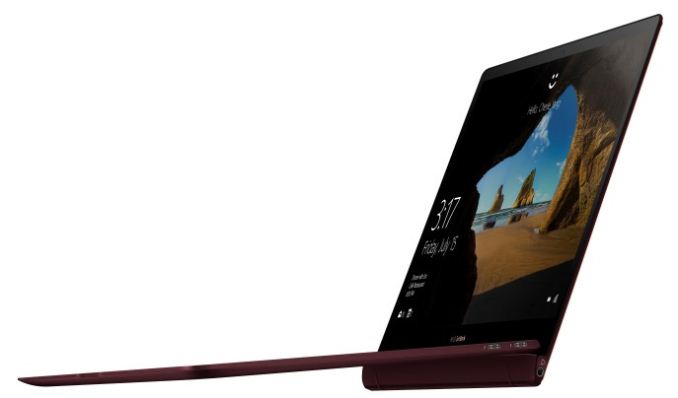 At their press conference at Computex in Taipei, Asus has announced the ZenBook S (UX391), a new clamshell laptop with an ergonomic design and a variety of colors. The laptop will launch on June 11 for $1,199.

The most notable part is what Asus calls the ErgoLift hinge, which lifts the keyboard to a 5.5-degree angle when the machine is open. It looks sort of like Dell’s old design on the XPS Adamo from 2010, but far more sleek. The company also claims that this hinge lets the device keep cooler than previous versions thanks to increased air flow.

At just half an inch thick, the ZenBook maintains a slim profile. As for the color selections, the new laptop is available in both Burgundy Red and Deep Dive Blue, which Asus expects will make it stand out from a number of other silver and black laptops on the market.

The laptop will come with either an Intel Core i7-8550U or Core i5-8250U quad-core processor, up to 16Gb of RAM and up to 1TB of PCIe SSD storage. There will be a 4K touchscreen option, or 1080p models with either glossy or anti-glare displays. Asus is claiming the ZenBook S has an 85 percent screen to body ratio, and that the display will offer 178-degree viewing angles.

The company is promising 13.5 hours of battery life; recharging is accomplished via the use of the laptop's single USB Type-C port and two Thunderbolt 3 ports. Rounding out the ports is a combo audio jack.

Andrew Freedman contributed to this article.