Shuttle has introduced its new ultra-compact personal computer, the XPC Slim DH370. The new desktop PC barebones is aimed primarily at multi-display special-purpose applications and can drive up to three monitors using Intel’s iGPU, but it can naturally be used as an office or home computer. The XPC Slim DH370 is designed for Coffee Lake processors with up to six cores and mainstream TDP.

Shuttle’s latest XPC slim DH370 comes in a small chassis measuring 19×16.5×4.3 cm, the same as the XPC slim DH310 launched back in August. Both systems support Intel’s 8th Gen up to six cores and use Shuttle’s ICE module featuring a large heatsink and two 60-mm fans, one of which is PWM-controlled. Both machines support up to Intel’s six-core Core i7-8700 processor. Shuttle guarantees that its ICE modules can ensure a stable 24/7 operation in 50⁰C environments.

When it comes to other things, the XPC slim DH370 and the XPC slim DH310 are generally similar. Both machines feature two SO-DIMM slots for up to 32 GB of DDR4-2666 memory, one 2.5-inch/7-mm bay for a storage drive, an M.2-2280 slot for an PCIe 3.0 x4 or SATA SSD, and an SD card reader. The motherboard design is a custom form factor built for Shuttle. 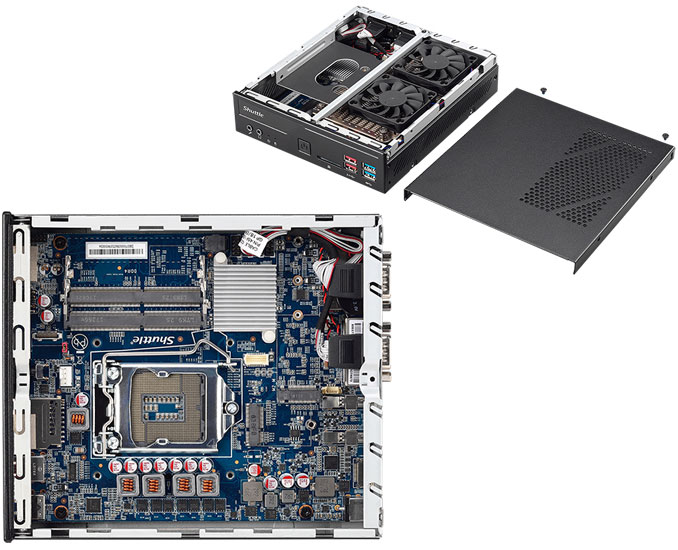 Shuttle has not announced MSRP of its XPC Slim DH370 barebones, though expect the system to cost more than ~$250, which is the price of the barebones XPC Slim DH310.