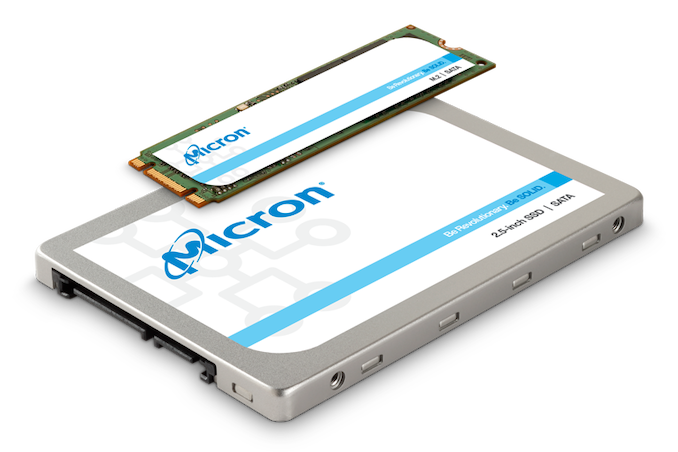 The Micron 1100 was very similar to the Crucial MX300 consumer/retail SATA drive, but since then the two product lines have diverged. The Crucial MX series switched over to using Silicon Motion controllers with the MX500, featuring 64L 3D TLC. The Micron 1100 stuck around and occasionally made an impact on the retail market as a cheaper alternative available through grey-market resellers.

Since there's hardly any room for performance improvement behind a 6Gbps SATA link, Micron is primarily touting improved pricing and power efficiency for the 1300 SSD, though neither is quantified all that well by their press release. We found Micron's 32L 3D NAND to be consistently one of the slowest 3D flash memories ever shipped, so it's likely that the Micron 1300 with 96L NAND does provide a boost to performance at low queue depths even if the peak performance is largely unchanged.

The Micron 1300 does not expand the range of available capacities: up to 2TB for 2.5" drives, and up to 1TB for M.2 SATA drives. Micron's datacenter SATA drives have hit 8TB using the same Marvell controllers, but the mainstream client SSD market doesn't have much demand for 4TB or 8TB drives yet.

The write endurance ratings at the higher capacities are rather disappointing, with both 1TB and 2TB models rated for the same 400TB total endurance. Micron is reportedly already selling 96L TLC in the recently introduced 960GB Crucial BX500, so they shouldn't need to use the 1300 to unload low-grade 96L NAND. Instead, it seems the low endurance ratings are simply due to a lack of market pressure, highlighting one of the ways that the OEM market differs from the consumer retail SSD market.