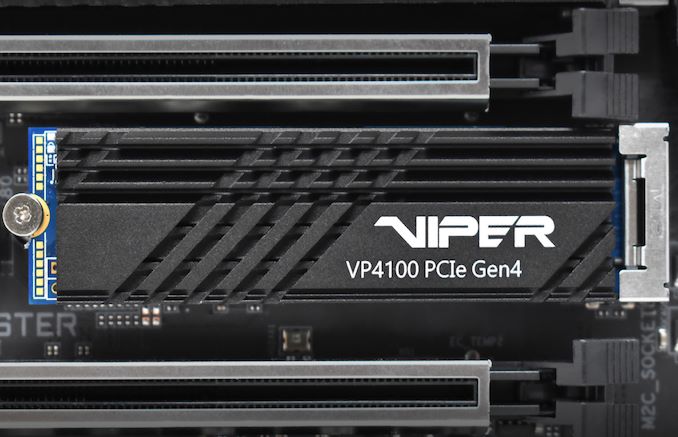 Patriot’s Viper Gaming division this week officially introduced its first PCIe 4.0 SSDs, several weeks ahead of schedule. The Viper VP4100 drives use Phison’s PS5016-E16 controller and generally resembles competing products. However, because of a custom firmware, the SSDs may differ a bit as compared to other E16 drives.

Available in 1 TB as well as 2 TB configurations and equipped with Phison’s PS5016-E16 controller as well as 3D TLC NAND memory, the Patriot Viper VP4100 is rated for up to 5000 MB/s sequential read speeds, up to 4400 MB/s sequential write speeds, as well an 800K peak read/write random IOPS. While the rated sequential write speed of the VP4100 is 100 MB/s lower than other drives based on the same controller, its rated random read/write performance is 50K IOPS higher, which looks like a reasonable tradeoff because random speeds usually have a more significant impact on end user experience.

To make sure that performance of the Patriot Viper VP4100 SSD is consistent under high loads, the manufacturer equipped the drives with an external thermal sensor as well as an aluminum heat spreader.