As with its predecessors, the Surface Book 3 packs the main CPU/SoC, RAM, SSD, wireless controller, and one of its batteries into the display section, serving as a detachable tablet. This provides the Book’s unique design feature, though it's a choice that does come with some compromise, as the nature of the device locks Microsoft into the 15-Watt processor options. On the smaller 13.5-inch, that’s not such a bad thing, since almost all other notebooks in that range also feature 15-Watt platforms. But the larger 15-inch model, as a productivity and performance targeted device, is going to be competing against devices which normally offer a 45-Watt CPU design. In CPU bound tasks, this is going to be a disadvantage. 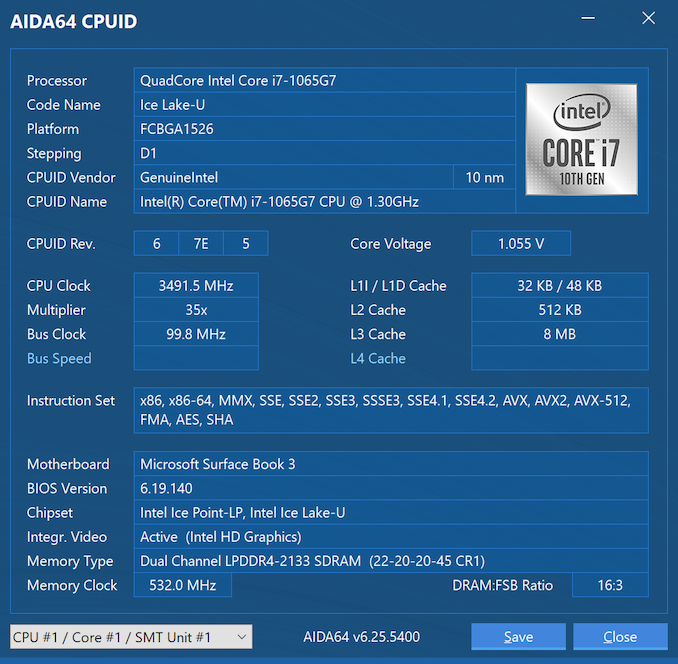 The advantage of the Surface Book design though, with two separate thermal loads, is that Microsoft can fit a much larger dGPU in the base, since it does not need to share the thermal capacity with the CPU, and the Surface Book 3 15 ships with the NVIDIA GeForce 1660 Ti in Max-Q configuration. So despite the less-powerful processor options, if your work is GPU accelerated, this could be an advantage for the Surface Book. And if you need even more performance and want to spend even more money, the Quadro RTX 3000 is an even larger GPU, plus it offers the Turing architecture’s RT Cores, which the GeForce GTX does not provide.

Microsoft has chosen to go with Intel’s latest Ice Lake platform for their CPU option. A couple of years ago, there would be no debate about this at all, but in 2020 there are three viable choices for this notebook. Microsoft certainly has more experience with Intel's SoCs, so it is not too surprising to see them stick with Ice Lake for this notebook, even though AMD could have offered twice the CPU cores and threads with Ryzen. It would have also been interesting to see them go with the Comet Lake based Core i7-10710U, which offers six cores, since the GPU duties can be fulfilled with the NVIDIA GPU when needed. But the Core i7-1065G7 found as the only option on the 15-inch model is no slouch either.

To see how the new Surface Book 3 performs, it was run through our recently updated laptop suite. For comparison devices, there will be a mix of devices to see where the Surface Book 3 performs compared to new Ice Lake devices, the latest AMD Ryzen 4000, and of course the older Surface Book 2. The older Dell XPS 15 9560 was also included to compare against a 45-Watt CPU and dGPU. Dell has refreshed this recently, but the new model has not been sampled yet. Our scores are pulled from our Online Bench Database and if a device was reviewed before a new test was added, there will be no data from that device. Please feel free to check out Bench if you’d like to compare the Surface Book 3 to any other device we’ve tested. 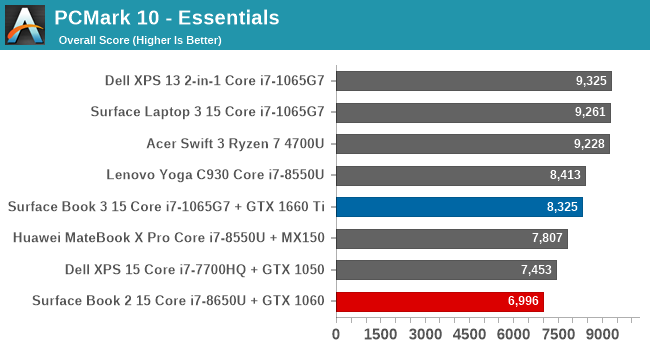 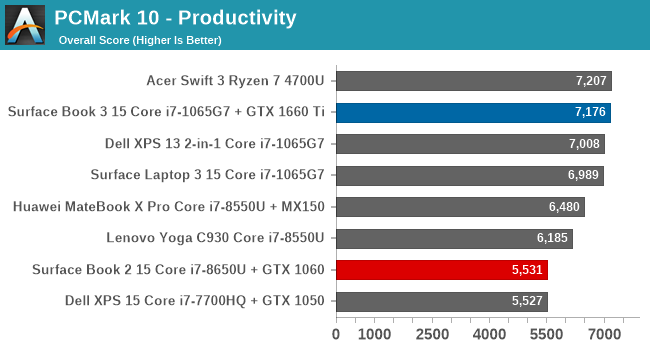 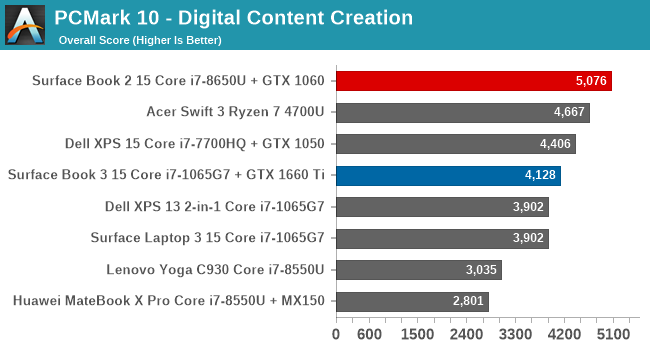 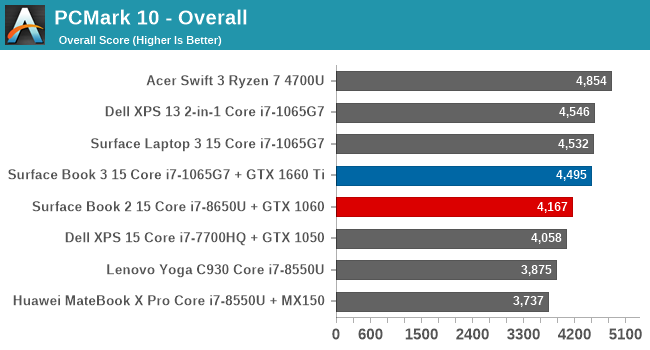 UL’s PCMark suite attempts to replicate real-world tests, and runs through several scenarios such as office work and content creation. It also measures app loading time and more and can take advantage of the GPU for some of its workloads. The Surface Book 3 slots in with the other Ice Lake devices, although is down slightly in the Essentials test. Most of the tests only leveraged the Iris Plus GPU, and the GTX 1660 Ti was only used for the photo editing portion which is quite short, so it does not impact the overall scores too much.

Now on version R20, Cinebench offers both single-thread and multi-thread runs for its computationally bound workload. The Ice Lake powered Surface Book does well here, although Intel is certainly at a core disadvantage compared to the new Ryzen 4000 platform, which powers the Acer Swift 3 with eight CPU cores. 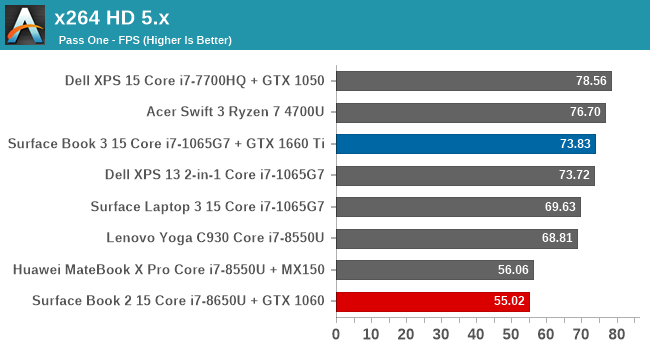 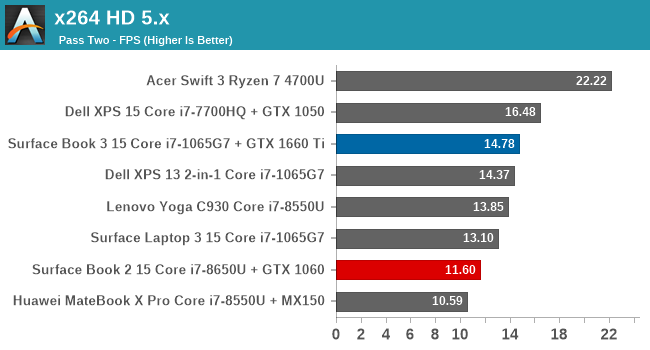 The x264 test transcodes video to H.264 using the CPU. It will be phased out as we move to a new Handbrake based benchmark, but we have a tremendous backlog of data so until we flesh out the Handbrake results a bit more we’ll continue to include it. The Surface Book 3 once again does well, although the extra cores of the Ryzen 7 4700U make a big impact on this multi-threaded test.

We use Handbrake to test not only software transcoding, but also hardware-based thanks to the media block support in Handbrake. The GTX 1660 Ti adds a lot more grunt here, putting the Surface Book 3 in the lead when using the hardware encode.

7-Zip is an open source file compression and decompression tool, and we log the results of its built-in benchmark. The Surface Book 3 is once again in-line with the other Ice Lake results.

The Surface Book 3 is the first laptop we’ve tested which ships with the new Chromium-based Edge as the default web browser. Web benchmarks are highly dependent on the browser due to the reliance on the scripting engines, so this is a perfect time to drop some of the web tests we were doing and move on. We’ll be adding the Speedometer 2.0 test, as well as keeping WebXPRT 3. 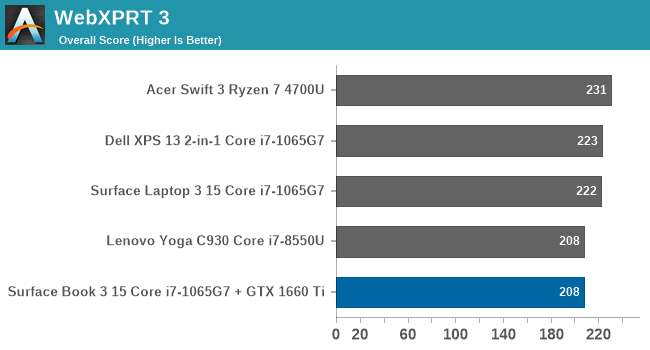 The Acer Swift 3 and Surface Laptop 3 were re-tested with the new Edge as well. Going forward, this will be our new standard. Be aware though that browser speeds change over time as the browsers get updated. Each score will be a snapshot in time.

When Microsoft announced the Surface Book 3 they said it had the fastest SSD they’d ever put in a laptop. They offer up to a 2 TB SSD now, with the 2 TB model being a Samsung, however the review unit arrived with a Toshiba-based 500 GB PCIe SSD.

We’ll also be updating our storage testing, moving away from peak read/write and over to the PCMark 10 Storage test, which tests traces of actual workloads including booting Windows 10, many Adobe applications such as Photoshop and Lightroom, and more. For a full guide on the test, please check out the PCMark 10 technical guide.

Although the Surface Book 3 can ship with the fastest SSD Microsoft has ever put in a notebook, that was not the case for the review unit, which was actually slower than the 256 GB SSD in the Surface Laptop 3.