Just in time for Flash Memory Summit, Micron is announcing their fifth generation of 3D NAND flash memory, with a record-breaking 176 layers. The new 176L flash is their second generation developed since the dissolution of Micron's memory collaboration with Intel, after which Micron switched from a floating-gate memory cell design to a charge-trap cell. Micron's previous generation 3D NAND was a 128-layer design that served as a short-lived transitional node for them to work out any issues with the switch to charge trap flash. Micron's 128L flash has had minimal presence on the market, so their new 176L flash will in many cases serve as the successor to their 96L 3D NAND as well.

Micron is still withholding many technical details about their 176L NAND, with more information planned to be shared at the end of the month. But for now, we know their first 176L parts are 512Gbit TLC dies, built using string stacking of two 88-layer decks—Micron would seem to now be in second place behind Samsung for how many layers of NAND flash memory cells they can fabricate at a time, and clearly in first place for the total number of layers on a die. 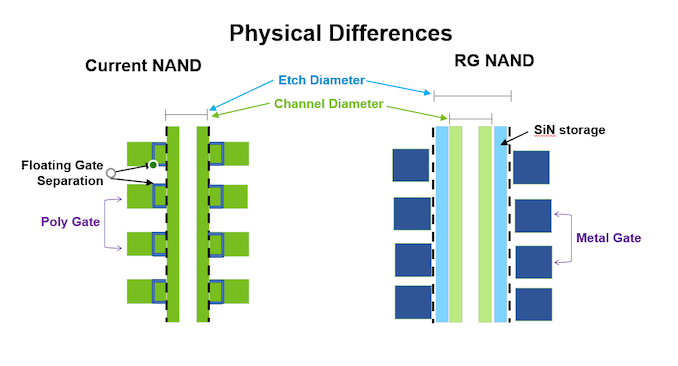 The switch to a replacement gate/charge trap cell design seems to have enabled a significant reduction in layer thickness: the 176L dies are 45µm thick, about the same total thickness as Micron's 64L floating-gate 3D NAND. A 16-die stacked package comes in at less than 1.5mm thick, suitable for most mobile and memory card use cases. As with previous generations of Micron 3D NAND, the chip's peripheral logic is mostly fabricated under the NAND memory cell stacks, a technology Micron calls "CMOS under Array" (CuA). This has repeatedly helped Micron deliver some of the smallest die sizes, and Micron estimates their 176L 512Gbit die is about 30% smaller than the best their competitors currently offer.

Micron's 176L 3D NAND has already started volume production and is shipping in some Crucial-branded consumer SSD products. However, Micron hasn't specified which specific Crucial products are now using 176L NAND (or their 128L NAND, for that matter), so we expect that this is a fairly low-volume release for now. Still, over the next year we should 176L NAND production ramp up to higher volumes than their 128L process ever reached, and we can expect a wide range of products based on this 176L NAND to be released and replace most of what's using their 96L NAND.