Semiconductor foundry offerings are thriving due to unprecedented demand for semiconductors and processors in recent quarters. Analysts from TrendForce believe that in Q1 2021 foundries will increase their revenue by 20% year-over-year as their capacities are fully loaded. Since the demand for chips is projected to continue to exceed the constrained supply for several quarters, market observers predict that manufacturers will be busy for a long time, and beyond this, will take a long time to catch up. This is good news for foundry revenue, and may encourage others to widen their foundry offerings. Warnings however about fab equipment are coming into play - being fully loaded means equipment now wears out faster, which increases risks of disruptions should that equipment also be short on supply.

The combined revenue of the top 10 foundries is projected to see a 20% year-over-year growth in the first quarter of 2021, according to data from TrendForce. Fabrication capacities of these companies are either fully loaded or almost fully loaded, and it is reported that a typical lead time for an ordered batch of hardware is above 14 weeks (3.5 months) now. This is longer than the cycle time of even advanced nodes. Some market observers believe that demand for semiconductors currently exceeds supply by up to 30%, and it is going to take well over a year for foundries and distribution channels to catch up to meet that demand.

"We believe semi companies are shipping 10% to 30% below current demand levels and it will take at least 3-4 quarters for supply to catch up with demand and then another 1-2 quarters for inventories at customers/distribution channels to be replenished back to normal levels," said Harlan Sur, an analyst with J.P. Morgan, in a note to clients, reports MarketWatch.

For now, all foundries are benefitting from overwhelming demand, which is coming from virtually from all segments of the market. Toc ounter this, when manufacturing facilities are fully loaded, there is incentive for these companies to dedicate less time for control and maintenance, which sometimes leads to malfunctions or even incidents that lead to further supply disruptions. As high demand continues, attention is going to be focused on the companies that supply the machines, both for fabrication and for metrology.

TSMC, Samsung, and UMC will continue to lead the foundry market in Q1 2021 and will post noteworthy sales gains because of increased orders, according to TrendForce's estimates. Meanwhile, smaller players like Vanguard International Semiconductor (VIS) and Hua Hong are expected to post even bigger gains as they make products that are in high demand. 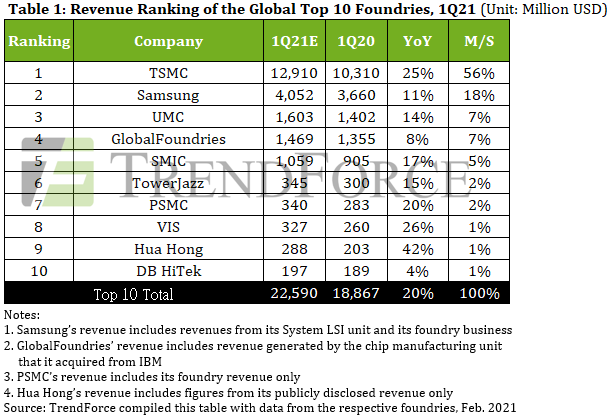 Out of the top 10 companies, Trendforce now has the top 5 with revenues over $1b per quarter, and the top 9 at over $1b per year.

Being the world's largest pure play foundry offering that controls over half of the foundry market by revenue, TSMC has arguably the most advanced fabrication processes and packaging technology offerings. TSMC takes a great advantage of the situation. The company produces 5 nm and 7 nm chips for such technology giants as Apple, Qualcomm, Nvidia, and AMD, all of which are overwhelmed with orders, so it is not surprising that the company's revenue is expected to grow 25% year-over-year in Q1 2021. This is despite losing Huawei as its primary customer over the past year - there are plenty of customers in reserve ready to pick up those excess wafers.

Keeping in mind the ongoing 5G, AI, and HPC megatrends as well as TSMC's vast production capacities for leading-edge, mainstream, and mature nodes, it is safe to say that the company's sales will continue to rise for years to come. TSMC is also investing heavily in its packaging technologies, as noted by several of its customers who actually see shortages on the packaging side, rather than the production side.

It should be noted that TSMC (and Samsung) are the two companies on this list making the most orders for next-generation EUVL machines from ASML for leading edge process node development. ASML's latest reports state that the company has 40+ back-orders in the pipeline globally, and expects to build 35+ machines through 2021.

Samsung Foundry serves numerous sister companies in the Samsung chaebol and can also offer leading-edge 5 nm and 7 nm nodes not available from its smaller rivals, so increased demand for electronics is going to drive its revenue by at least 11% this quarter, according to the analysts.

Samsung Foundry is behind TSMC when it comes to capacities and adoption of leading-edge processes. Meanwhile, the company is gradually expanding and the number of rivals that can offer both advanced and proven technologies is shrinking, so its positions are going to remain strong.

As the fourth largest foundry in the world, GlobalFoundries is experiencing high capacity utilization rates and is projected to increase its sales by 8% year-over-year in the first quarter. TrendForce attributes its ongoing success to orders from the automotive industry as well as from the U.S. Department of Defense.

GF is actually one of the smallest YoY growth improvements compared to other foundries, with the company looking to offload some of its more minor operations, such as Fab 10 in Fishkill which has been sold to ON Semiconductor for $430 million..

In more recent news, GlobalFoundies 45nm process at Fab 8 in Malta, NY, has been formally approved for Department of Defense ITAR certification.

After refocusing its R&D efforts to specialty process technologies a few years ago, UMC no longer competes directly with TSMC and Samsung Foundry in the high end of the market. Yet the company makes loads of display driver ICs (DDICs), PMICs, RF front-end, IoT products, and automotive chips. As demand for automotive hardware, PCs, consumer electronics, and smartphones is on the rise, the company enjoys strong orders and is on track to post a 14% year-over-year revenue increase in Q1 2021.

SMIC, is the leading China-focused company developing leading edge process node technology with support from the Chinese government to make the country less reliant on external semiconductor operations. SMIC was recently added into the U.S. Department of Commerce's Entity List faces significant problems serving its advanced tools and may even cease development of sub-10 nm technologies. It has been reported that despite ordering a single EUVL machine from ASML, the Entity List addition has meant that machine never shipped, putting a dent on any post-10 nm production.

Despite this, the lion's share of SMIC's revenue comes from mature nodes and the company has vast production capacities. It is expected to post a 17% increase in sales year-over-year, according to TrendForce.

The remaining five foundries in the top 10 (Towejazz, PSMC, VIS, Hua Hong, and DB HiTek) manufacture specialized chips as well as BCD, CIS, DDICs, IGBTs, PMICs, NOR, and other devices that are in high demand these days from various industries. To that end, sales of these products grow along with demand for electronics in general, so these companies are set to post a 4% ~ 42% year-over-year revenue growth this quarter, TrendForce believes.