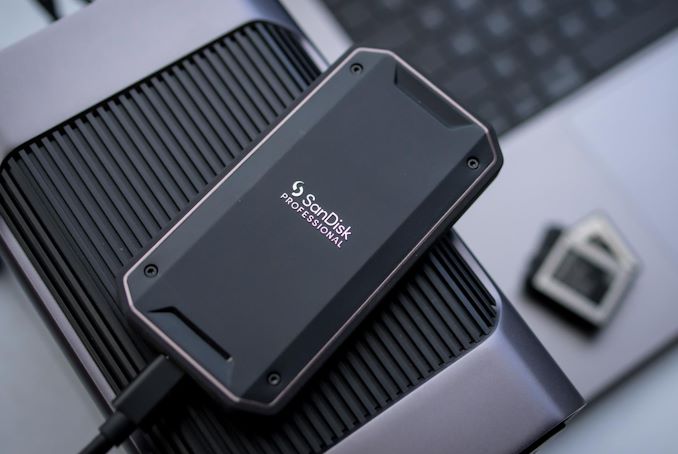 Western Digital is introducing a new flagship portable SSD today under the SanDisk Professional brand. The PRO-G40 dual-mode PSSD ticks all the right boxes for prosumers, content creators, and studios looking for a high-performance rugged bus-powered portable storage drive with wide compatibility. 1TB and 2TB versions are available. While the PSSD delivers its maximum performance (close to 3GBps) when connected to Thunderbolt 3 hosts, it can also work as a 1GBps-class drive when connected to a USB 3.2 Gen 2 host port. Western Digital provided us with a 2TB sample of the PRO-G40 to put through our rigorous direct-attached storage evaluation.

External bus-powered storage devices have grown both in storage capacity as well as speeds over the last decade. Thanks to rapid advancements in flash technology (including the advent of 3D NAND and NVMe) as well as faster host interfaces (such as Thunderbolt 3 and USB 3.x), we now have palm-sized flash-based storage devices capable of delivering 3GBps+ speeds. While those speeds can be achieved with Thunderbolt 4, mass-market devices have to rely on USB. Within the USB ecosystem, USB 3.2 Gen 2 (10 Gbps) is fast becoming the entry level for thumb drives and portable SSDs.

The initial wave of Thunderbolt 3-based portable SSDs and enclosures offered impressive performance, but market acceptance was limited by their incompatibility with traditional USB ports. Intel's Titan Ridge controllers offered an interesting feature when used in client devices such as peripherals and/or docks. In addition to downstream PCIe lanes, an USB 3.2 Gen 2 host interface was also included. This allowed manufacturers to offer unique dual-mode designs by tweaking the traditional JHL7440 Thunderbolt 3 SSD. The USB 3.2 Gen 2 downstream port is connected to the upstream interface of a USB to NVMe bridge chip. Depending on the host to which the drive is connected (reported by the JHL7440), the PCIe 3.0 x4 lanes of the NVMe SSD are connected to either the JHL7440's downstream PCIe 3.0 x4 lanes or the bridge chip's PCIe 3.0 x4 lanes. The Sabrent ROCKET XTRM-Q was one of the first PSSD lineups to support dual-mode operation based on this architecture.

Western Digital is joining the dual-mode bandwagon today with the SanDisk Professional PRO-G40 Portable SSD. The PSSD uses the WD_BLACK SN750E M.2 2280 drive internally. On the bridge side, the JHL7440 Titan Ridge Thunderbolt 3 controller is augmented by the ASMedia ASM2362 USB 3.2 Gen 2 - NVMe bridge chip. The enclosure itself is quite stylish, and is made of solid aluminum. One side is covered by a silicone base. The drive also includes a LED indicator and a metal-reinforced USB-C port.

These features allow the PRO-G40 to obtain an IP68 rating - complete protection against dust ingress, and no damage resulting from complete and continuous impression under 1m of water. The solid aluminum core allows for drop- (up to 3m) and crush-resistance (up to 4000 lbs.) also, while supporting faster heat dissipation as part of the thermal solution.

The PRO-G40 PSSD comes in a minimal package with the main unit and a short 20cm Thunderbolt 3 passive cable. The length could be a concern for typical desktops, but the use-case for these dual-mode drives mostly involves notebooks or systems that utilize a Thunderbolt dock as part of the workspace. 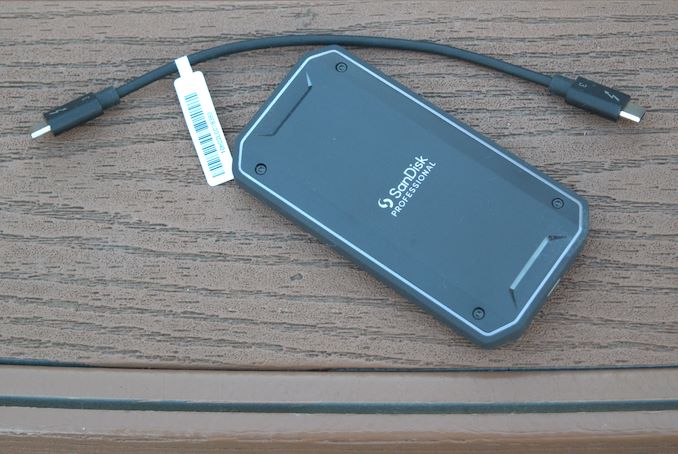 The drive comes formatted for Macs out of the box, but it is trivial to reformat in one's OS of choice. Our sample was evaluated with the exFAT filesystem on a Windows 10 machine. The 'issues' plaguing all Thunderbolt SSDs on Windows affect the SanDisk Professional PRO-G40 too. Unless write caching is enabled in the volume policies for the Thunderbolt port-connected drive, the write performance doesn't match the expectations / advertised numbers.

Our policy is to evaluate all external storage devices with default OS settings - and this has been for quick removal since we moved to Windows 10 on our new testbed. However, we did evaluate the PRO-G40 drive thrice - once connected to a Thunderbolt 3 port, and another time connected to a USB 3.2 Gen 2x2 port enabled by the ASMedia ASM2342 controller. In our final pass, we repeated the evaluation procedure with the write cache settings modified, as shown in the picture below (default settings on the left, and modified one on the right). 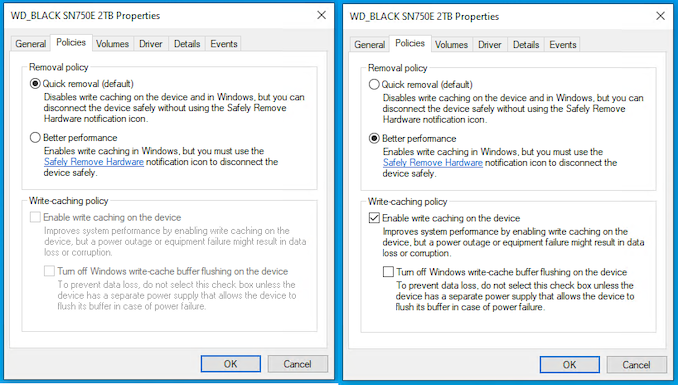 CrystalDiskInfo provides a quick overview of the PSSD as seen by the host system. The interface section is of particular interest - NVM Express over Thunderbolt, and UASP (NVM Express) over USB 3.2 Gen 2x2 Type-C.

The table below presents a comparative view of the specifications of the different PSSDs presented in this review.

Prior to looking at the benchmark numbers, power consumption, and thermal solution effectiveness, a description of the testbed setup and evaluation methodology is provided.

The testbed hardware is only one segment of the evaluation. Over the last few years, the typical direct-attached storage workloads for memory cards have also evolved. High bit-rate 4K videos at 60fps have become quite common, and 8K videos are starting to make an appearance. Game install sizes have also grown steadily even in portable game consoles, thanks to high resolution textures and artwork. Keeping these in mind, our evaluation scheme for direct-attached storage devices involves multiple workloads which are described in detail in the corresponding sections.

In the next section, we have an overview of the performance of the SanDisk Professional PRO-G40 2TB PSSD in these benchmarks. Prior to providing concluding remarks, we have some observations on the device's power consumption numbers and thermal solution also.