OCZ shipped us their DDR3-2133 Blade 6GB kit last month and asked us to review it as part of our Core i7 975 launch. Of course, we could not refuse that offer. We received the Blade kit, our 975 ES processor, and several other premium components, but hit a huge bump in the road during testing. You see, it turns out our 975 engineering samples could not clock their way out of a paper bag. As such, we decided to order a retail 975 and it finally arrived along with a retail EVGA X58 Classified (E759) motherboard.

We were confident the lethal combination of a very good Core i7 975 and one of the best clocking motherboards around will allow us to take this memory kit to its limits. However, yet another speed bump presented itself as our cooling capabilities in the labs here are limited to various high-end air coolers or TEC units such as the CoolIT Systems Freezone Elite. Armed with the realization that we were going to be limited to the 4.5GHz range and resulting 2150 memory speeds we decided to pack the kit up for shipment. Raja will be the lucky recipient as he has the proper cooling equipment available and is already working on a DDR3-2000+ article at this moment for the more fanatical readers.

In the meantime, we ran a few numbers with a Core i7 920D0 stepping at both stock core speeds and an almost universal 4.2GHz overclock on the ASUS Rampage II GENE motherboard. We also completed a couple of quick overclocks on the 920/Classified combo just to show what a couple of minutes of playing around with the BIOS can provide with this kit on high-end air cooling. As you will see shortly, there really is no reason for the typical desktop user to procure a kit like this for 24/7 use, unless you just want one for a status symbol.

We are sure OCZ will welcome your business with open arms no matter your purpose, but their primary audience is the people who benchmark for a living. In that regard, this kit is designed to compete against the latest DDR3-2000 C7 6GB kits from Corsair and GSkill. As such, today's preview could be considered somewhat laughable by the hardcore enthusiast but it is perfect segue into our mainstream memory articles later this week. That is not to say this kit is completely without merit, it will easily run DDR3-2133 C7 settings at voltages we have not reached with the other two manufacturer's products and for benchmarking activities that is an important distinction. For the other 99% of us, it is fun to see the numbers but we have far better alternatives available in the market. 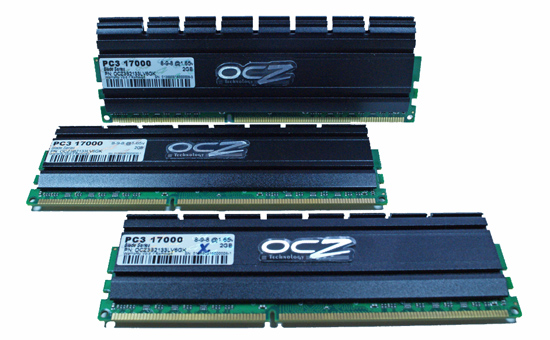 This is OCZ's top rated Blade series kit. Of course looking at the specifications it is the top rated kit available, period. Whether it is the top performing kit is something we will answer shortly. OCZ designed this kit to operate at DDR3-2133 (1067MHz) at timings of 8-9-8-24 on the X58 platform with 1.65v, preferably with the Core i7 975. The reason being, IMC load, the lower the Bclk, the lower the load and voltage requirements on the platform when using the unlocked multiplier on the 975 to gain CPU speed compared to a locked processor like the 920 or W3540 that requires high Bclks to reach like processor speeds. It is a little more complicated than that, but that is the 10,000ft overview.

The OCZ Blade OCZ3B2133LV6GK features the top (1%) binned Elpida Hyper J1108BASE-MNH-E IC or the "Hyper" for short. These IC's are already rated for the upcoming ultra low 1.2V/1.35V voltage specification as well as the current JEDEC standard of 1.5V. One of the primary differences between these IC's and all others is that they use copper interconnects as opposed to aluminum, resulting in higher clock speeds at lower voltages. I wonder where we have heard that use of technology before. Anyway, it is obvious by now that we are not dealing with your mass produced DDR3-1066 kits and as such we expect a heavy price premium when these kits launch in the coming weeks.

In the meantime, let's take a quick look at these unique modules being subjected to clock rates that probably had them screaming, not from pain, but rather embarrassment.