And we begin, with a graph: 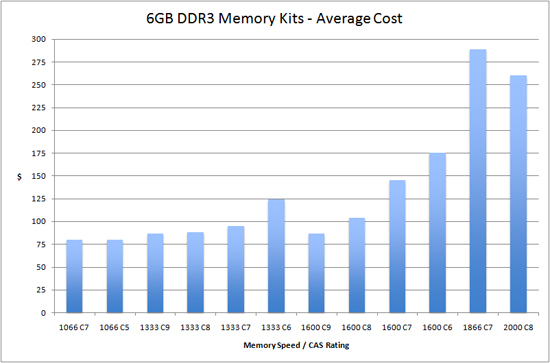 The graph above represents the cost, from Newegg.com, of 11 different 6GB DDR3 memory kits (1066 C7/C5 are the same kit). The only variables are the manufacturer and speed of the DDR3 memory included in the kit.

All of that extra money is going somewhere: frequency and latency. The lowest end kit has a data rate of 1066MHz and a CAS latency of 7 cycles. The most expensive kit has a 1866MHz data rate at the same CAS latency; that’s a 75% increase in data rate.

A 10% increase in CPU speed rarely yields more than a 4 or 5% increase in performance, but what about a 75% increase in memory speed? We don’t have a single page on AnandTech to point you to that would answer that question. At least we didn’t, until today.

A Brief History of DDR3

We first met DDR3 alongside Intel’s P35 chipset. It’s performance at the time was at best equal to or usually worse than DDR2 while carrying a significant price premium. It wasn’t until the release of the Intel X48 and NVIDIA 790i chipsets that Socket 775 users could even see an advantage to using DDR3 and even then, it was primarily for benchmarking contests - hooray, because we all know how important those are.

There were some tangible advantages to DDR3 from the start, the biggest being it’s lower operating voltage. DDR2 memory required 1.8V while DDR3 could run at 1.5V, this made DDR3 particularly attractive for notebooks but on the desktop the advantage was sort of abused.

In order to take advantage of DDR3’s higher memory speed, benchmarking enthusiasts often had to use DDR3-1866/2000 kits that required voltages in the 1.8V~2.0V range to reach these clock speeds. Performance improvements in certain benchmarks were available through brute force use of voltages and ICs that allowed high memory speeds at decent latencies. In the end, improvements in actual applications were just not worth the cost or trouble of using DDR3 compared to DDR2.

Intel made no secret of its plans to move the vast majority of their processor lineups to DDR3 memory a few years ago. They truly wanted/desired that DDR3 would be the standard memory of choice by the time P45/X48 launched, but DDR3’s limited availability, middling performance, and a price premium that was truly prohibitive for the mainstream crowd, let alone the enthusiast market space made this desire impossible. As such, this left users with memory controllers not truly optimized for either memory technology that resulted in performance not significantly different from earlier Core 2 supporting S775 chipsets.

AMD recently released the AM3 platform and their AM3 based Phenom II processors support both DDR2 and DDR3 allowing users to either upgrade to AM3 boards or keep using their DDR2 based AM2+ boards, a simple if not elegant solution. With the recent release of new boards, BIOS optimizations, and near cost parity with DDR2, we now think DDR3 is a viable option for AMD users.

That said, DDR3 started coming into its prime last fall as the release of second and third generation DDR3 devices along with Intel’s Core i7. Core i7 and the X58 platform introduced Intel’s first on-die memory controller. Aside from other architectural improvements, Core i7 supports three DDR3 memory channels compared to the standard two channel setup, yielding some impressive bandwidth numbers.

There was one problem with this new design, a real fly in the ointment actually for the memory suppliers. Current JDEC specifications list 1.50V as the official voltage specification for DDR3 with a move to 1.35V in the near future and eventually to 1.20V. However, most of the performance oriented DDR3 modules released for the Core 2 platforms generally operated at 1.8V~2.0V in order to hit high speeds with decent latencies. In essence, the memory kits were already overclocked to hit clock speeds that made DDR3 a performance consideration on S775. The memory controllers on the Core 2 based Northbridge products could easily handle these voltages and surprisingly enough, so could the ICs.

Well, Intel officially released their recommended memory voltages for the Core i7 several months before launch with 1.50V as the recommended base voltage and 1.65V as the suggested maximum along with 1.35V for VTT (QPI) maximum. This left the memory suppliers in a bind as true high-speed low-voltage ICs were not going to appear until after the Core i7 launch. Intel extended official support to DDR3-800/1066 speeds only, although most current X58 motherboards support speeds up to DDR3-2133 or higher.

At the Core i7 launch, the market ended up with a bevy of DDR3-1066/1333 low-voltage kits with a sprinkling of higher speed DDR3-1600 and DDR3-1866 kits based on highly binned ICs that met the 1.65V recommendation. One other twist was that the memory suppliers had to package low-voltage higher-speed 3-DIMM kits instead of the normal 2-DIMM configuration in order to satisfy triple channel owners.