Ever notice how 3D graphics on a computer are always razor sharp, regardless of how fast things are moving? In fact, from a still screen shot, you can't tell whether or not something is moving at all. In the real world, if you take a picture of a fast moving object with a typical camera, you don't get anything near that crisp and can tell that the object is moving by the blur the image has. This effect is known as motion blur and is one of the biggest reasons that a movie at 30 fps can look quite smooth, yet 30 fps in a game is nowhere near as fluid. 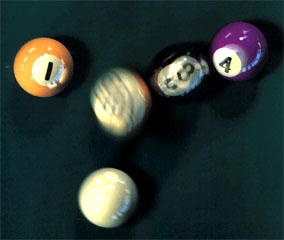 This is just another instance in which aliasing gets in the way of photorealistic 3D graphics. This time, the 3D image is simply not being sampled often enough, so time based aliasing occurs. The solution provided by the T-Buffer is to render the the object to be blurred multiple times in slightly different positions, and then blending those multiple renders into a single frame. This single frame has a slightly blurred version of the desired object and simulates motion blur.

This time, 3dfx had their own demo to show us since motion blur is not something that can be turned on, but rather lets the game determine how the effect is applied.  The demo was known as "rocket burger" and featured two Jetsons style cars in a drag race. 3dfx provided us with a 4.7MB MPEG video showing the demo we saw, with standard rendering on the left, and T-Buffer effects enabled on the right.  Below are a few screenshots from the demo with motion blur in action - the effect is disabled on the left and enabled on the right.  You'll need to enlarge the images to get a good idea of the effect.

You'll notice that the motion blur occasionally looks like four, distinct, translucent copies of the object in slightly different positions. This occurs primarily with fast moving objects, just where motion blur is most necessary actually. According to 3dfx, this is a result of the way the demo was written, and that developers could easily compensate and generate a more realistic effect.