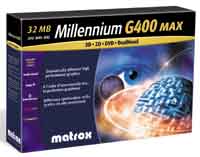 Matrox has always been known for having great cards for professionals - the Millenium and Millenium II were the kings of 2D longer than any other card out there. When real 3D power was finally available with the 3Dfx Voodoo Graphics, the Millenium II was considered the best 2D card to pair with that raw 3D power. The Voodoo2 came along and the Millenium II was still the best card to drive your Windows desktop.

Matrox decided to get into the 3D game with their own G200, which was released a little more than a year ago, it promised to provide near Voodoo2 speed at a lower cost, with an integrated 2D core and more advanced 3D rendering features. However, its biggest stumbling block was the lack of a full OpenGL ICD (Installable Client Driver) for use with games like Quake 2 or professional applications like 3D Studio Max. Fortunately, Matrox promised to have a full a ICD shortly after release. However, as G200 owners know all too well, that ICD took well over 6 months to be released, and when it was released, it was not as fast as originally promised. Furthermore, there was no ICD support for NT until nearly a year later.

When Matrox announced their follow-up product, the G400, the big question on everyone's mind - would it have an ICD and, if so, would that ICD be fast? Once again, Matrox assured us that it would be solid and AnandTech's first look at the G400 during E3 proved promising as it was running Quake 3 Test at a reasonable frame rate with no obvious visual glitches. But once again, when we got the G400 in the lab, it became clear that the OpenGL drivers were holding the card back.

Fast forward a few months to September 1999. Matrox has been through a number of driver revisions for the G400 and claim performance has jumped substantially. In a few weeks, October 8 to be exact, Matrox is planning to release a mini ICD for the G400. This technique allows the driver to be optimized for specific application(s). In this case, Matrox has chosen to optimize for games, specifically Quake 2, Quake 3, and any games based on those engines.

They've given AnandTech the go ahead to preview this new mini ICD. However, we're not just previewing the mini ICD today, but also taking this opportunity to revisit the G400 series gaming performance.

Note: Matrox has not authorized AnandTech to distribute these files and we will not do so. The final version should be available on October 8, 1999 directly from Matrox.