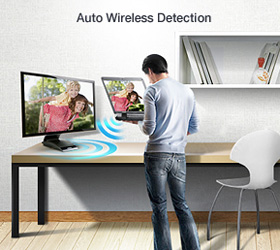 During the last few years, laptops have become powerful enough for people to use as their main computer. Sales figures support this too. If we look at for example Apple’s sales figures, twice as many desktops were sold compared to laptops in 2002. However, during the recent years, laptops have stolen a huge portion of the sales of desktops, making the situation the opposite of 2002: laptops now outsell desktops by a two-to-one ratio.

While laptops can now offer performance sufficient for some real work, there is one thing that they cannot offer: screen real estate. Most laptops have around a 15” screen, but resolutions vary a lot depending on the model and price range (1366x768 at the low-end, and up to 1920x1200 in higher-end models). 22-24” monitors with resolutions of 1920x1080 have more or less become the standard for desktops and such monitors can be had for ~150$ nowadays.

Because laptops lack screen real estate, a laptop with a separate monitor at home has become a very common setup. This gives you portability when on the go and a desktop-like setup when at home with extra screen size/resolution. However, this kind of setup has one big setback in that you need to plug in a bunch of cables when you get home to use your external monitor and other peripherals. With a desktop, you just turn the computer on or wake it up from the sleep mode; there's no hassling with cables required. While you could call one lazy if it’s too much to plug in a few cables, you often end up either using the laptop on the desk with the monitor all the time, or you never plug in the monitor and it sits on the desk unused.

Laptop docking stations have offered a solution, but there are several shortcomings. First off, not all laptops have a design suitable for docking (Apple’s laptops come to my mind). Second, each laptop dock is only suitable for certain laptop models, so if you buy a new laptop you most likely have to buy a new laptop dock as well. A new dock will easily set you back at least $100, which is quite a lot for an ugly piece of plastic. Finally, many consumer laptops don't even have suitable docks, which rules out a docking station completely.

This is where Central Station becomes interesting. You don't need to connect any cables and you don't need an ugly dock. Everything is wireless.