Dell Inspiron One 2320: Stuck in the Middle With You

Introducing the Dell Inspiron One 2320

Our last Windows all-in-one review was for HP's TouchSmart 610, an interesting if slightly pricey piece of desktop kit. HP brought a lot of innovation to the table but they couldn't quite patch over the underlying problems with the hardware and software ecosystems that keep a touch-based all-in-one from really achieving all it can. Today we have on hand the Dell Inspiron One 2320, complete with Dell's own touch-based software interface and its own bells and whistles. Is Dell able to smooth over those issues better than HP could, or did they stumble on to some new ones? 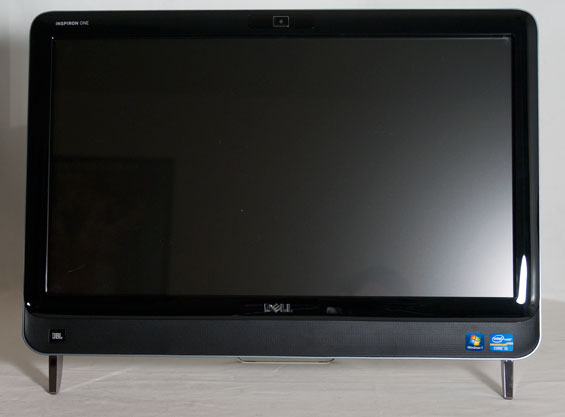 What surprised me out of the gate was that Dell opted to go for a much less adjustable stand than any of HP's or even Toshiba's all-in-ones (one of which we have in house); the Inspiron One 2320 has two legs and then it just sort of reclines on its own. That makes it simultaneously more and less user-friendly than the competition; there's something about it that feels more approachable, but at the same time it's really less adjustable than the other ones, and with a TN panel that really spells trouble. Let's hit the specs before we go any further.

As with HP's TouchSmart 610, Dell's Inspiron One opts for a mix of desktop and notebook hardware. The CPU is a low-power desktop model, the Intel Core i5-2400S clocked at 2.5GHz and capable of turbo-ing up to 3.3GHz on a single core or 2.6GHz on all four non-Hyper-Threaded cores. Instead of desktop DIMMs, though, Dell only offers two SO-DIMM slots, each with 4GB of DDR3, more than adequate for even demanding use cases.

The graphics hardware takes the hit, though. I ranted a bit about the lack of a proper ecosystem in my HP TouchSmart 610 review, but here it's particularly egregious. Dell opts for a lowly NVIDIA GeForce GT 525M as the fastest GPU you can get in the Inspiron One 2320 line. The desktop GeForce GT 430 it's descended from was already pretty dire to begin with, but just 96 CUDA cores running at 600MHz (1.2GHz on the shaders) and just 1.8GHz of DDR3 on a 128-bit memory bus isn't going to cut it for a 1080p display. We've tested this chip on Dell's XPS 15z as well, and really it's only good for medium detail 768p gaming. This is the same issue I had with HP's all-in-one, only here it's amplified because there had to have been thermal headroom in the Inspiron One 2320 for at least the GeForce GT 540M. I'd complain about that, too, but not quite so vocally.

When I spoke to HP's representative about the meager graphics hardware in the TouchSmart, she suggested that it was really meant to be more of a family computer and thus didn't need particularly aggressive graphics hardware. That may be the case, but it undermines the necessity of a dedicated GPU to begin with. If the integrated HD 2000/3000 graphics are inadequate, you probably plan on doing at least some gaming, so you'll want more. The fact is that these mobile graphics chips were designed for notebooks with 768p screens, and at that resolution they're fine. On an all-in-one, though, they're much harder to justify and really speak to a fundamental problem with the all-in-one ecosystem: we need an in-between point for graphics hardware. What we really need for "upscale" 1080p AIO systems is at least GT 555M or (preferably) GTX 560M level hardware; we've seen such chips in 14" and 15" notebooks; would it really be that hard to stuff something faster into a significantly larger AIO system? The GT 525M upgrade from the base model Inspiron One 2320 ends up costing over $200, and for that price it just doesn't add enough performance.

The rest of the Inspiron One 2320 is capable enough, and Dell seems to be gunning for more of a true family machine with it by including VGA, composite, and HDMI inputs, suggesting that even when the computer inside it isn't particularly great anymore, you can still use it as a monitor. It also supports Intel's WiDi, and the hard drive inside is a full 3.5" drive.