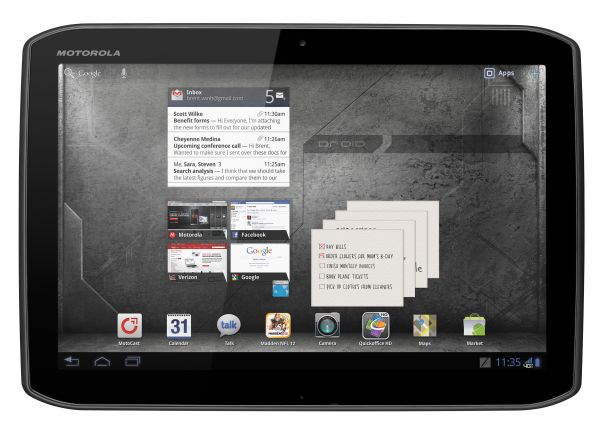 If you thought the Xoom name left something to be desired, Verizon's branding of the Xoom 2 line as the Droid Xyboard (pronounced like "cyborg") line isn't going to perk you up. Regardless, in a release today they announced the 8.2" and 10.1" Xyboard variants would be launching alongside a white Droid RAZR variant. Though unconfirmed, it's likely that all three devices are running the same TI OMAP 4430 clocked at 1.2 GHz, each with 1GB of RAM and all promised to be upgraded to Ice Cream Sandwich in due time. At present though, buyers will make due with Android 3.2 in the tablets, and Gingerbread in the RAZR. The new tablets owe more than their internals to the RAZR, as the design language closely mirrors that of the phone.

The Xyboard 8.2 is being targed towards media consumption, with 2.1 surround sound built-in and touting HD Netflix streaming. Each tablet features an IPS 1280x800 display, and are supposed to be significantly thinner than their predecessor. LTE is, of course, offered, and pricing on a two-year contract remains impressively high. But if you hate square corners and are looking for a 4G tablet to sate your LTE-loving heart, the Xyboards will be available sometime this month, with a starting on-contract price of $429 and $529 for the 8.2" and 10.1" tablets, respectively.