Samsung has started CES early and has announced two new monitor lineups: Series 7 and Series 9. Series 7 is a premium consumer-grade series whereas Series 9 is mainly aimed toward professionals. Below are the specifcations:

C27B750X seems the be the successor of C27A750X, which was the first monitor to feature Central Station technology. We analyzed Central Station in last June and to summarize it briefly, it's basically a wireless laptop docking station. You connect a USB stick to your laptop and when you come within ~5 feet of the display, it automatically connects to the display. It acts as an external monitor but you can also use the USB devices connected to the monitor. Unfortunately, the display is still 1080p but the panel type has changed. Samsung lists the type as Wide Viewing Angle LED but as far as I know, there is no such panel type. It's definitely not TN as the viewing angles are much better. It's possible that it's a new panel type developed by Samsung or simply a fancy name for e.g. S-PVA or PLS. The price is down by $50 when compared to its predecessor, which is certainly a welcome action. 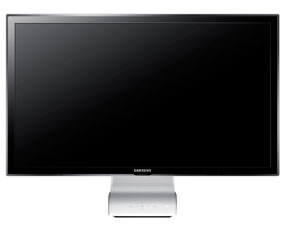 Samsung markets the T27B750 as a monitor but due to its HDTV tuner, it's more like an HDTV. However, it does feature a few USB ports and 27" is suitable for desktop use as well. Unfortunately, the panel type is TN so quality wise T27B750 is the worst of the three displays being launched. $599 makes it fairly expensive but its unique design (see photo at the top of this article) may be something people are willing to pay extra to get.

As for the S27A970, it's currently the only member of the Series 9. It's 27" just like the Series 7 monitors but features 2560x1440 resolution instead of the more common 1920x1080. It uses a PLS panel which is similar to IPS, but according to Samsung provides better viewing angles and image quality. $1199 is a high price for a monitor but Series 9 has been designed for professional use, hence the price can be justified. However, it's still more expensive than e.g. Dell's U2711 or the Apple Thunderbolt Display, although the Samsung may feature a better panel (Dell and Apple both use an LG panel, while the Samsung ones seems to be in-house).

Also, all monitors include MHL, Mobile High-definition Link. It's an interface found in some newer smartphones, such as the Samsung Galaxy S II, Galaxy Nexus, and HTC Evo 3D. The interface is capable of carrying 1080p uncompressed video and 8-channel audio. MHL doesn't use a specific port and it can be tied to micro-USB and HDMI, both which are fairly common in higher end smartphones. While the availability isn't until March 2012, Samsung will have all three monitors on display at CES 2012.