SandForce sets aside more NAND capacity than most controllers for spare area. While Intel, Marvell, Samsung and others default to ~7% of total NAND capacity for spare area, SandForce is almost double that. The difference boils down to RAISE, SandForce's NAND redundancy algorithm that requires the consumption of a full NAND die. The original idea was that RAISE and SandForce's DuraWrite technology could allow SSD vendors to use cheaper, less reliable NAND without any impact to the end user. It seems as though no one was willing to risk using anything but the best NAND, so we never really saw this feature exploited. A bit over a month ago, ADATA released their XPG SX900 series. It utilizes the oh-so-common SF-2281 controller but unlike other SandForce SSDs, RAISE is disabled - giving the end user more usable space.

Maximizing SandForce Capacity - How it's done

When an SSD is marketed as for example 120GB, it must have 120GB of usable space (before formatting, of course). However, the advertised capacity does not always reflect the raw NAND capacity. Both 120GB and 128GB SSDs actually have 128GiB of NAND onboard. Notice that GB and GiB are not the same. As these two are easily confused with one and another, let's revisit the topic quickly.

As SSDs capacities are advertised in Gigabytes, there is always some "hidden" space thanks to Gigabyte to Gibibyte translation. A 120GB SandForce SSD has ~17.4GB or 12.7% of space that is inaccessible by the end-user. What is that space used for then? Two words: RAISE and over-provisioning.

RAISE (Redundant Array of Independent Silicon Elements) uses the capacity of one NAND die (8GiB for 2x-nm NAND) for parity data. Hence you can lose up to a full NAND package worth of data without losing anything from the user's standpoint. While RAISE is optional, all SandForce SSD manufacturers have enabled it on +120GB drives thus far. 60GB SSDs have RAISE disabled because the user accessible space would be only ~56GB with 8GiB for RAISE and ~7% for over-provisioning. 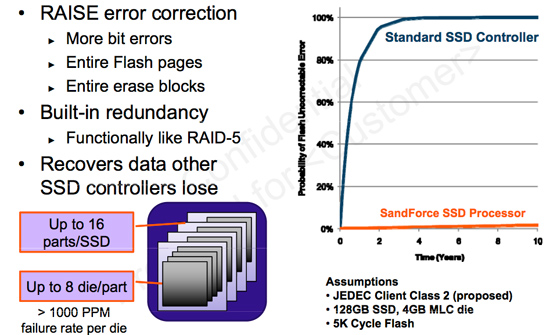 So, now we know how the space in a typical SandForce SSD is allocated, but what exactly has ADATA disabled or decreased to achieve a higher capacity? An SSD cannot work without over-provisioning because it would have no space to do garbage collection, wear leveling, and bad block replacement. 0% OP is impossible as the drive could not function if it was filled. That leaves us with RAISE. ADATA has simply disabled RAISE to gain the extra 8GiB and make 8GB of it user accessible (the remaining ~0.6GB is used for OP to keep the OP percentage the same).

And that's it. There are no extra tricks, no extra NAND onboard, and no special controller or other magic. All SF-2200 series controllers support a RAISE-disabled mode, and ADATA is simply the first one to employ it on a drive larger than 64GB. This actually brings us to the next question: What has ADATA done with the 64GB drive?

60GB SandFroce drives already have RAISE disabled because with 8GiB for RAISE and 7% for OP, the usable capacity and hence advertised size would only be 56GB. When RAISE is disabled, there is actually 12.7% left for OP on a 60GB SF drive. ADATA has simply decreased the amount of space dedicated to OP to 7%, which yields a usable capacity of 64GB (or 63.9GB to be exact).

According to SandForce, RAISE is not even necessary for consumer workloads and the built-in 55-bit BCH ECC engine should be effective enough for error correcting. Personally, I would rather lose a small proportion of capacity to prevent potential data loss, but everyone's point of view is different. In my opinion, if you need the extra capacity that one NAND package provides, then your SSD is too small to begin with. It's always a pain in the neck to deal with a drive that's nearly full, especially if it's your boot drive.

ADATA sent us a 128GB review sample. Below is the specification table for the XPG SX900 family:

Performance is exactly what you would expect from a SF-2281 drive. RAISE does not impact performance so this is not surprising.

I also decided to include Mushkin in the comparison because many of you have been speaking of their drives in the comments. I won't go in-depth about Mushkin right now, but the Chronos series uses a SandForce SF-2281 controller and asynchronous Micron NAND, which is very similar to OCZ's Agility 3.

It's good to keep in mind, however, that SSD prices fluctuate a lot as sales come and go. I started with the table from our Corsair Performance Pro review, but then widened our search criteria to include other online vendors; there have been plenty of changes just in the past week or so. If you are buying a new SSD, my advice would be to follow the prices for at least a few days, as you can easily save $20 or more by doing so.

As we are dealing with slightly different capacities due to the fact that most SandForce SSDs have RAISE enabled, the best way to look at this data is to compare the price per GB: 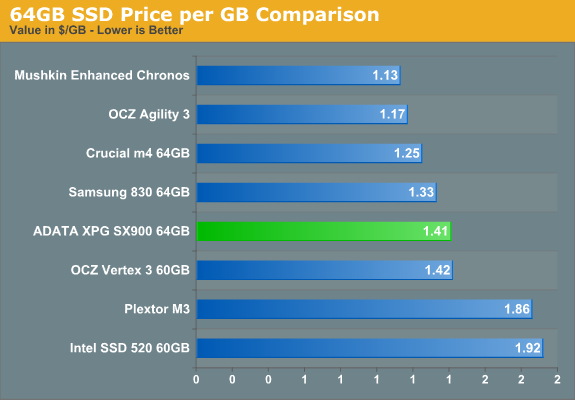 The 64GB model is in the middle of the pack in terms of pricing, basically matching the Vertex 3. The Intel SSD 520 and Plextor M3 are both substantially more expensive per GB, which is not where you want to be for a "value" capacity SSD. Given that factor, the Mushkin is currently the drive to beat for 60/64GB. 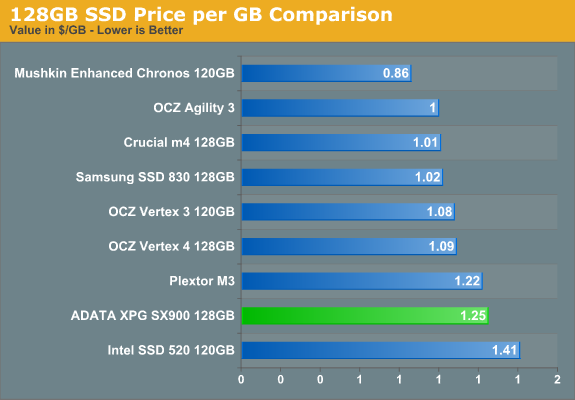 The 128GB SX900 doesn't do very well at 128GB, dropping further down our charts. Price per GB is higher than the other options--again, with the exception of the Intel 520. Even though the SX900 has 8GB more usable space, in terms of value you'd be much better off with something like the Samsung 830, Crucial m4, or the Chronos and Agility 3. 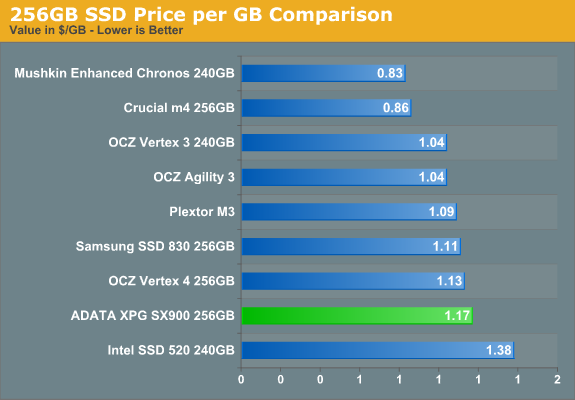 At 256GB, the trend continues with the SX900 again only offering better "value" (not taking into account firmware and reliability factors) than the Intel 520. It's only slightly more than the Vertex 4 and Samsung 830, but again we're looking at the same capacity for those two drives. 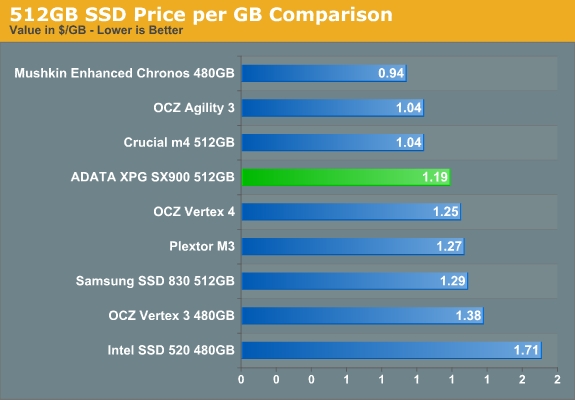 Only at 512GB does ADATA finally manage to place in the top half of our pricing charts. At these capacities, sales volume is much lower due to the overall high pricing, but outside of the Agility 3 and Chronos (which use slightly slower asynchronous NAND), the SX900 is the least expensive SF-2281 based high capacity SSD. 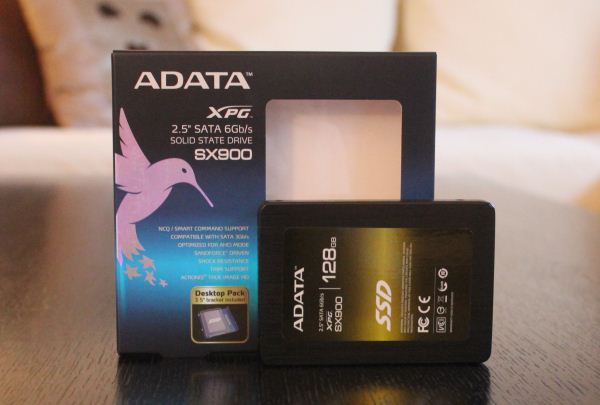 The drive comes with compact packaging. There is a 3.5" desktop bracket included along with mounting screws and a quick installation guide. There is no software CD included but ADATA offers a free Acronis True Image HD download, which is a handy backup/cloning utility. The 3-year warranty that ADATA gives is pretty standard for an SSD, but it could be better as for example Intel and Plextor offer 5-year warranties. The front side of the drive is covered by a big sticker that has ADATA's logo, the model number, and the capacity of the drive. 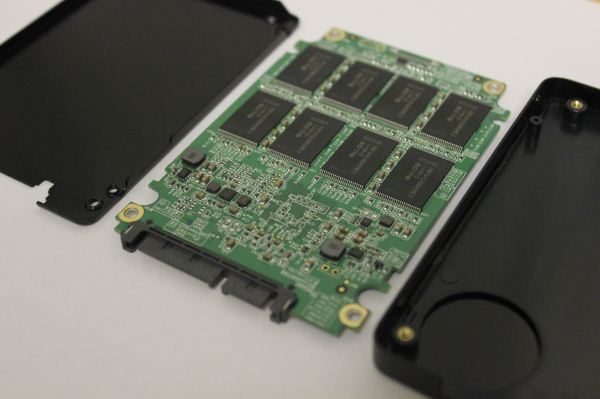 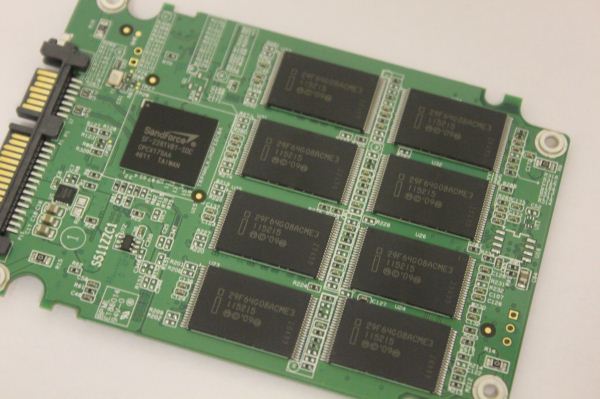 On the actual PCB, there are sixteen 25nm Intel MLC ONFi 2.x (synchronous) NAND devices, eight on each side. Since this is a 128GB drive, it means all NAND devices consist of a single 8GiB die. As expected, the controller is SF-2281.